Posted on April 25th, 2016 by John Frenaye in Editorial Musings

Social media is amazing! It has opened so many doors for travel agencies and enabled us to expand our audience quite literally worldwide. Yet with that benefit, comes a very dangerous dark side.

If you find some great content (opinion, photos, advice, specials, etc) and share them with the right audience, the world is your oyster. Recently on a non-travel page I have, I shared a really stupid photo I took in a coffee shop. For reasons unknown to me, it took off. Go figure.

The page grew significantly in terms of “likes”, engagement and brand recognition. It was a good post. It was successful. And I still don’t know why. 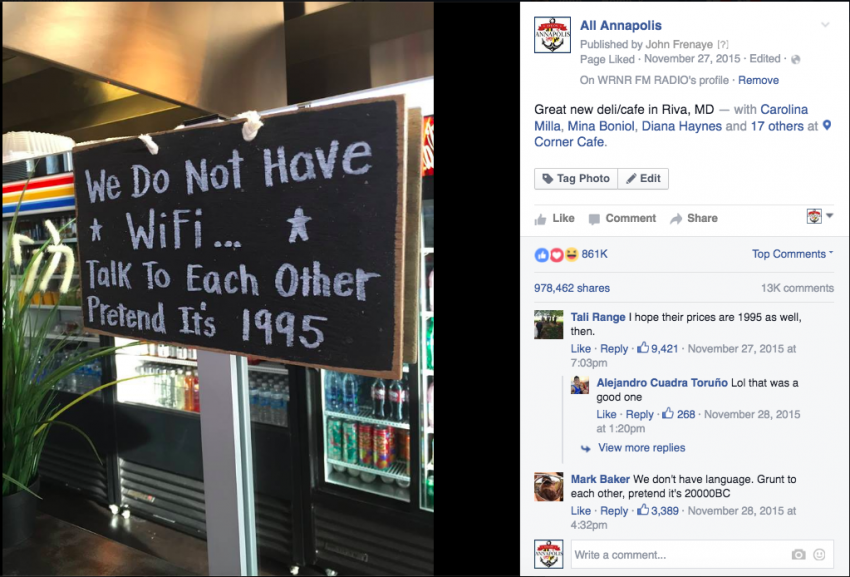 But the opposite can be true as well. There is a restaurant in town that is owned by two restaurateurs who also are elected part-time politicians. The politicians are not terribly popular, and what is really is a decent restaurant is taking a beating. Over the past two months, there have been posts to a local Facebook page that bashed the place for poor service and poor food quality. While that was not my experience, it apparently was that of the poster, and then the thousands of others who chimed in.

That posting also went viral. Someone suggested taking the issues over to Yelp as well, and all of a sudden, the restaurant was dealing with a huge PR issue. Business was dropping which necessitated the laying off servers and prep cooks. Advance reservations were taking a hit as well which indicated that as we enter a tourist season, some of the city’s visitors were taking notice.

The restaurant re-trained employees and implemented new policies they felt would help. They planned a neighborhood “get to know us” party that included 2 drinks per person and a whole spread of food for free. If I had to guess, the little damage control party cost them about $5,000. It seemed to help.

But it still did not do much for the one and two star ratings on Yelp. Nor did it get rid of the slicing comments on Facebook from people who did not attend the party—or more likely, those that relish kicking someone when they are down simply because they can… anonymously… from behind a keyboard.

Going forward, they probably have a year of hard work ahead of them to get their reputation rebuilt. Not unlike bad credit—little else but time will cure it! And also, just like a credit score, a slight lapse can be unforgiving.

So where does this tie into travel? It really ties into any business. You need to monitor your social report card very carefully. Left unchecked, you might just see all of your current and potential business siphoned away from under you. When you notice something negative or adverse, it is critical that you get on top of it as soon as possible.

If you are in a position to address it publicly, that is great. Maybe you had a bad employee. A solution might be to mention that he or she is no longer with you and offer an invite to give another shot. Maybe you need to emphasize that you understand the issue and explain the specific steps you have taken.

If you can’t address it publicly, see if you can get it offline as soon as possible. If a client had a bad trip and is being unreasonable (usually the case when it gets online) in their “demands for reparation,” just publicly acknowledge the client’s issue and ask that they either call you or email you so you can work on the resolution. Even if there is no resolution possible, at the very least it is showing that you are vested in your business and are willing to address the good and the bad.

I know of one wedding specialist whose unreasonable clients (spoiled brats) took the embellished story to social media and The Knot. Most platforms are hesitant to remove what they believe to be a legitimate review from a user. The resulting PR nightmare was nearly an agency-killer, and I am still unsure if they ever recovered. The smart agent is aware, and forewarned. Do not become another victim of death by social media.

Share your thoughts on “Monitoring your social report card is critical”