Posted on April 8th, 2016 by Ralph Grizzle in Deck Plans

Next month, Royal Caribbean will launch its newest ship, the massive 5,400-guest Harmony of the Seas. The third Oasis-class cruise ship is the first in its class to be built in nearly seven years. She’s also the largest cruise ship in the world, surpassing her sisters Oasis of the Seas and Allure of the Seas by over 2,000 gross tons.

Debuting in Southampton in May of 2016, Harmony of the Seas will set sail for the Mediterranean, operating a season of sun-filled sailings to some of the region’s most historic places from her homeports in Barcelona and Rome. Following that, she sails across the Atlantic to winter in the Caribbean, making Port Everglades (Fort Lauderdale), Florida, her home.

But Harmony of Seas isn’t merely a carbon-copy of her sisters. Mindful of the need to innovate, Royal Caribbean has been hard at work tweaking Harmony of the Seas to add entirely new features, and to bring the best of Quantum and Anthem of the Seas over to the Oasis-class ships for the first time.

What can you expect from Harmony of the Seas? We take a look at five brand-new features that differentiate this gargantuan maritime masterwork:

Sure, Radiance of the Seas had that tiny waterslide near the kids splash park when she debuted in 2001. That doesn’t really count; particularly when you feast your eyes upon the insanely unique waterslides that Royal Caribbean has created for Harmony of the Seas.

Harmony of the Seas will boast an intricate waterpark positioned high above the Central Park area that runs along the centerline of the ship. These brightly-colored slides – known as Cyclone, Monsoon and Typhoon – will travel several decks in height, starting near the ship’s forward radar mast and travelling down to her upper pool deck.

At her stern, Harmony of the Seas will boast the largest waterslide at sea – by a long-shot. The Ultimate Abyss is a 10-story waterslide that will travel from the ship’s uppermost deck down her stern, emptying out on the boardwalk below. Guests will travel a total of 216 feet at a speed of nine miles per hour as they spiral down to the decks below.

When Oasis and Allure of the Seas were first introduced, Royal Caribbean’s robotically-served watering hole was but a twinkle in its corporate eye. Introduced aboard Quantum of the Seas in 2014, the Bionic Bar became one of Royal Caribbean’s greatest runaway hits – and it now makes its way, for the first time, onto an Oasis-class ship.

Aboard Harmony of the Seas, the Bionic Bar will take up a key (and vastly-expanded) space. Designed by Makr Shakr, these robotic bartenders can make nearly any drink you can dream up. Guests order via an iPad-esque menu system that allows guests to select from popular drinks, or choose their own ingredients. From there, the robot takes over, whipping up a perfect cocktail every time.

Expect this area to be just as busy aboard Harmony of the Seas – even in its expanded space.

A Two-Story Version of Wonderland

On the subject of cuisine, Harmony of the Seas includes a massive, two-story version of Wonderland, the innovative restaurant concept that was first introduced aboard Quantum of the Seas. 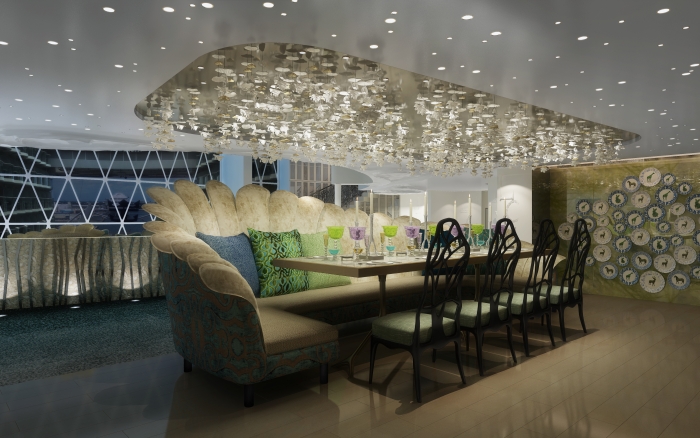 Unlike the small space onboard Quantum of the Seas, Wonderland has been vastly expanded aboard Harmony of the Seas. A grand room with a flowing staircase, Wonderland will offer up unique culinary creations in one of the most imaginative dining experiences on the high seas.

Royal Caribbean is promising that Harmony of the Seas will have larger staterooms than her predecessors, particularly accommodations on Deck 6 and above. The ship also boasts a greater selection of top-of-the-line suites, with design improvements made to location and styling compared with Oasis and Allure.

Harmony of the Seas will also feature the first Virtual Balcony staterooms on an Oasis-class ship. Introduced aboard Quantum of the Seas in 2014, these staterooms – which mimic the look and feel of a real balcony thanks to some clever use of position-relative CCTV cameras mounted to the exterior of the ship – have become some of the hottest staterooms around, routinely selling out on most voyages. Now, Royal Caribbean brings virtual balcony technology to Harmony of the Seas in time for her May debut.

Harmony of the Seas sets sail from Southampton this May on her maiden revenue sailing to Barcelona. When she does, she will be the largest cruise ship in the world, and the newest ship in Royal Caribbean’s always-expanding fleet of technologically innovative cruise ships.

Share your thoughts on “Preview: Royal Caribbean’s Harmony of the Seas”