On Viking Sea’s pre-christening cruise last week, I went shopping with the chefs in Barcelona. The market-to-table experience is offered on select voyages and goes for $199 per person for up to 12 people. Worth it? I’ll let you be the judge.

We started our morning with a transfer from Viking Sea, docked at Barcelona’s World Trade Center, to the famed Mercat de Sant Josep de la Boqueria, or simply La Boqueria. With our small press group were chefs Ashley Duff and Gaetano Monteriso and a local guide. Our guide told us a lot about the history of the market and what was offered here. Plus, she was handy in translating between Spanish and English for the chefs. 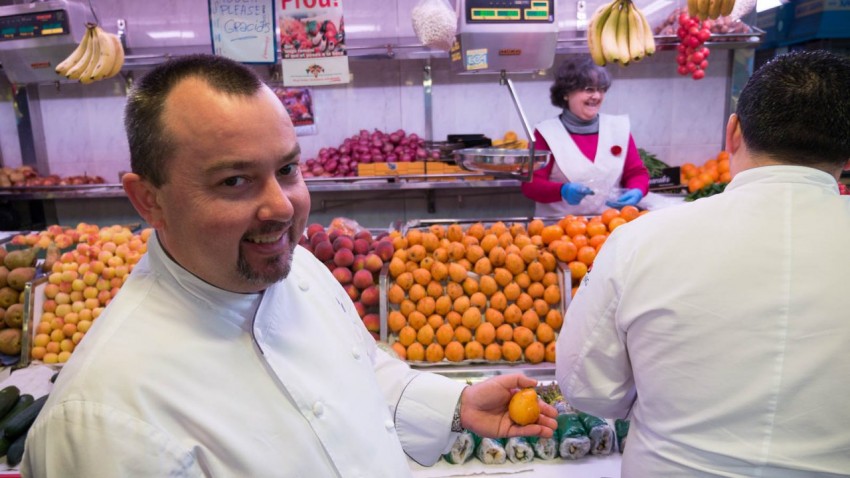 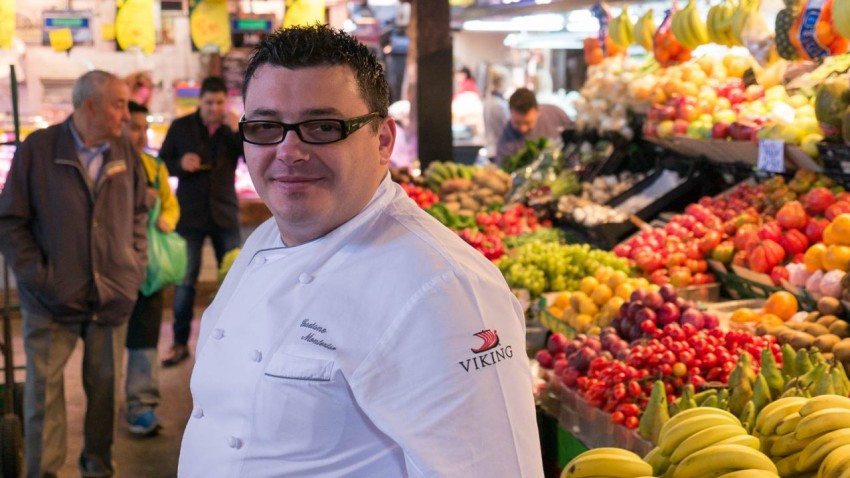 [/media-credit] Shopping With The Chefs
Chef Gaetano Monteriso at the Boqueria market in Barcelona. 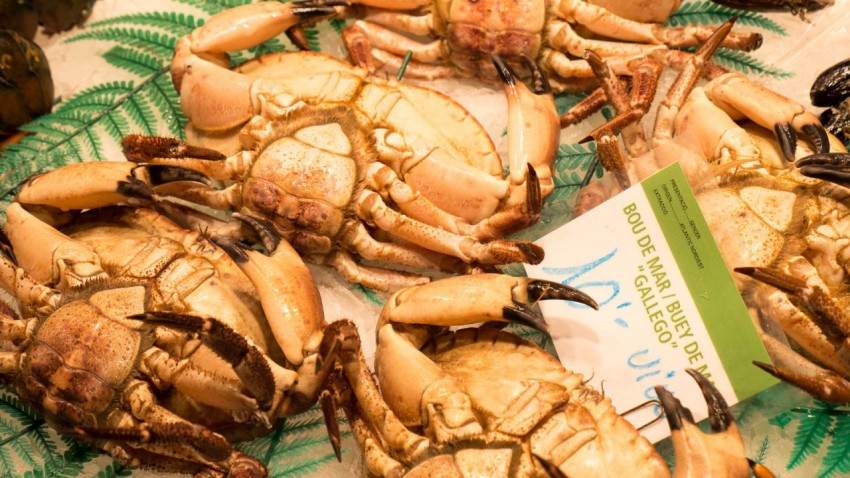 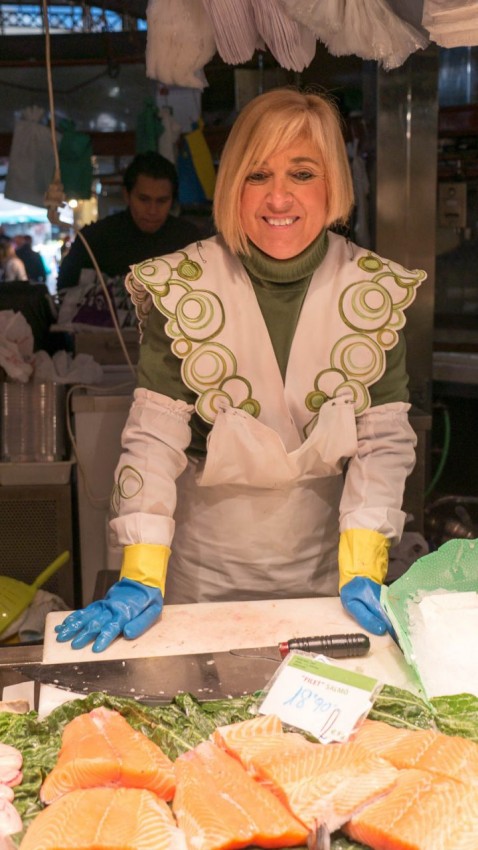 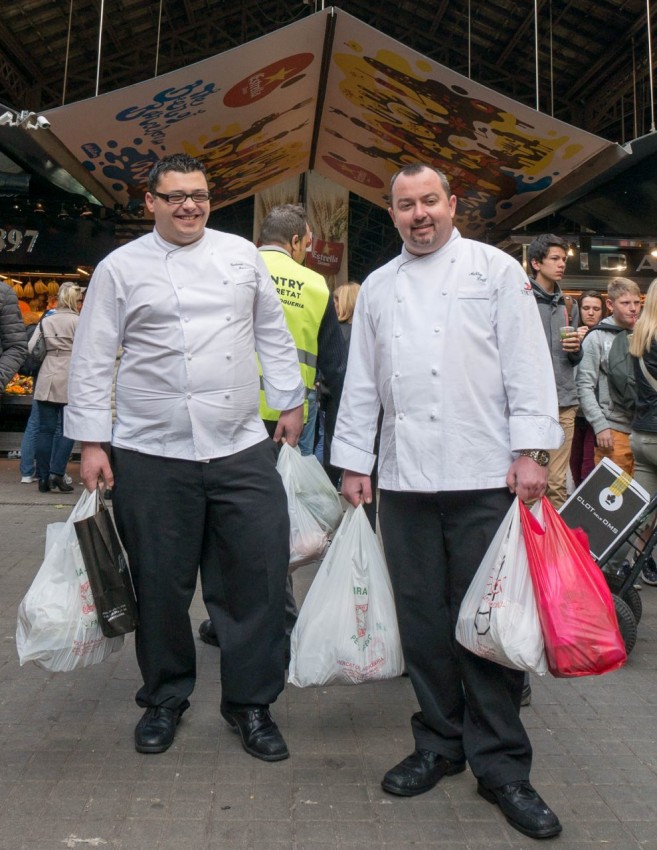 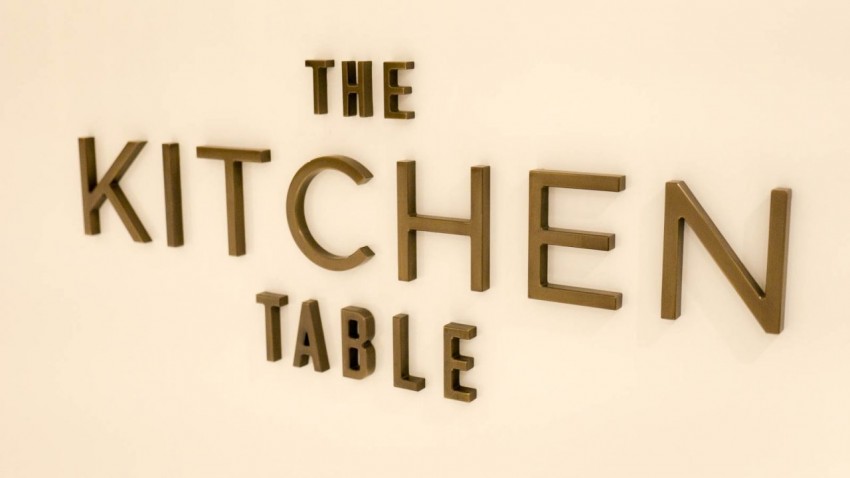 [/media-credit] The Kitchen Table
This special dinner carries a cost of $199 per person for up to 12 people. Our dinner included shopping with the chefs, hands-on cooking and special wines and champagnes. 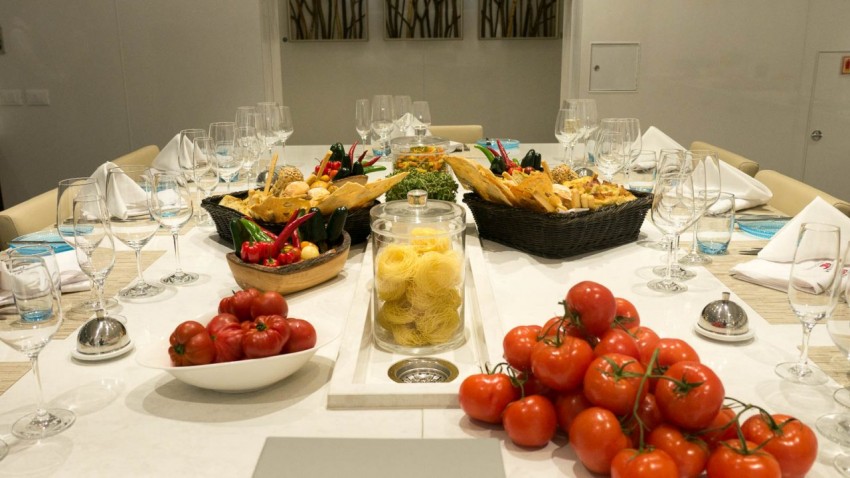 [/media-credit] A Beautiful Table For Us
All set up for tonight’s Kitchen Table dinner. 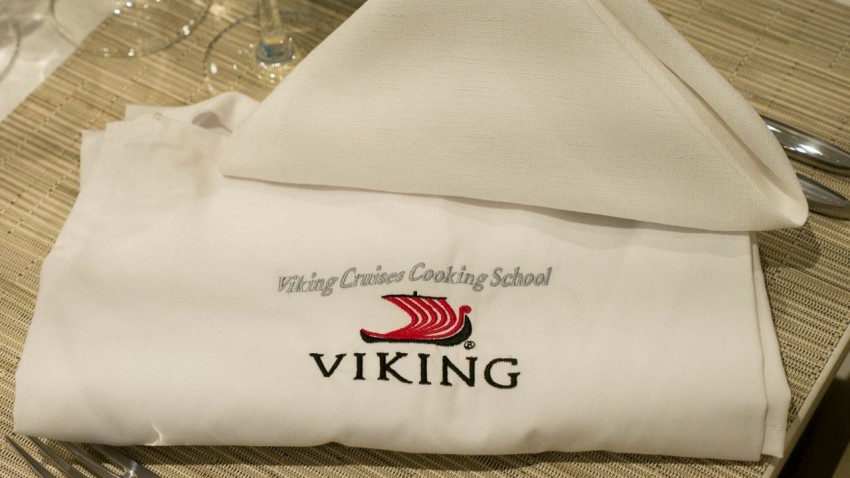 [/media-credit] An Apron To Take Home
As a reminder of the evening, guests get to take home their full-length aprons. 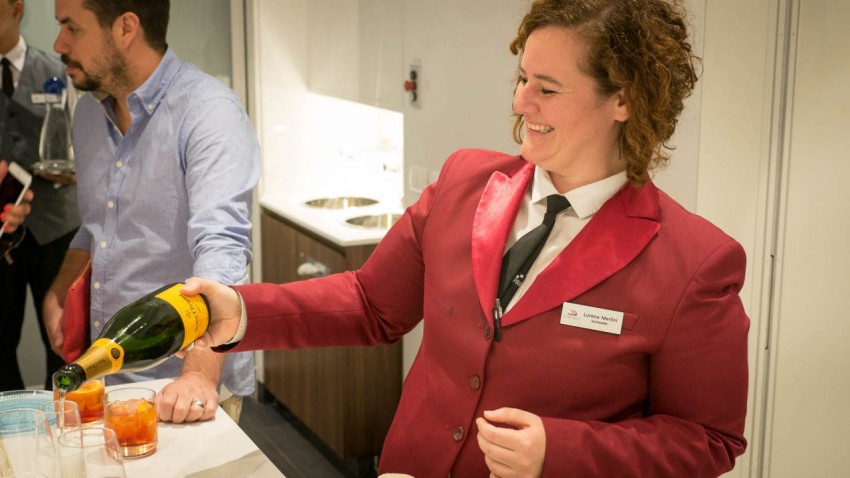 [/media-credit] World Class Sommelier
From Milan, Italy, Lorena Merlini has a passion for her job as sommelier on Viking Sea – and it shows.

We were in the market for about an hour. The chefs said they were impressed with the selection. Paying from a wad of cash in hand, the chefs purchased fresh vegetables and seafood, and even enough Jamón ibérico, priced at a jaw-dropping €179 per kilogram, for our group to enjoy before our dinner. We returned to the ship with several bags full of fresh goods.

In the early evening, after enjoying an afternoon on Viking Sea, we walked through Manfredi’s restaurant, one of the ship’s reservations-only dining venues, to reach the special show kitchen known as The Kitchen Table. We were greeted with glasses of Veuve-Clicquot champagne, a precursor to the select wines that would be expertly paired with each dish during the evening. Lorena Merlini, Viking Sea’s sommelier, did a great job at pairing the wines. Get to know her on your Viking cruise.

Viking provided full-length aprons that we were free to take home. After donning them, we stepped up and began to prepare starters, with hands-on guidance from the chefs. I learned quite a bit, such as how rubbing garlic and tomato on fresh baguettes infuses the bread, which is wonderful provided that you like garlic and tomato. I do. 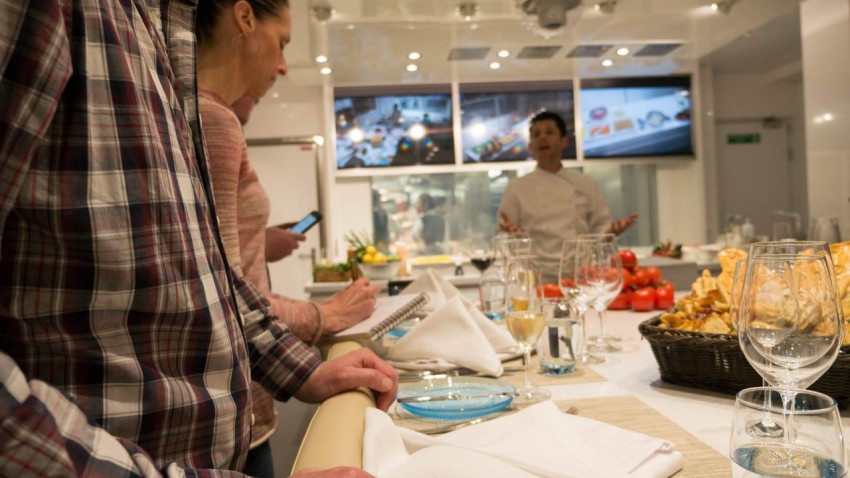 [/media-credit] The Show Begins
Anthony Mauboussin, director of culinary development for Viking Ocean Cruises, kicks off the evening at The Kitchen Table. 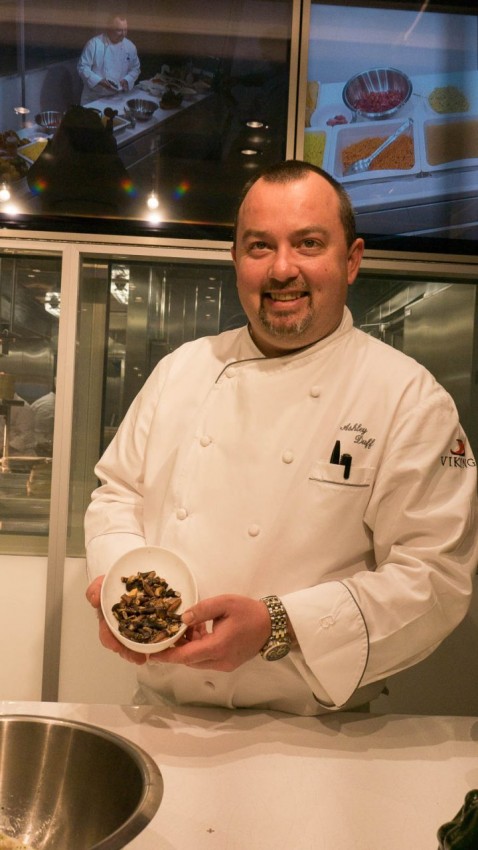 [/media-credit] Prepping For Dinner
Back on board Viking Sea Ashley Duff, executive chef, prepares for the evening dinner. 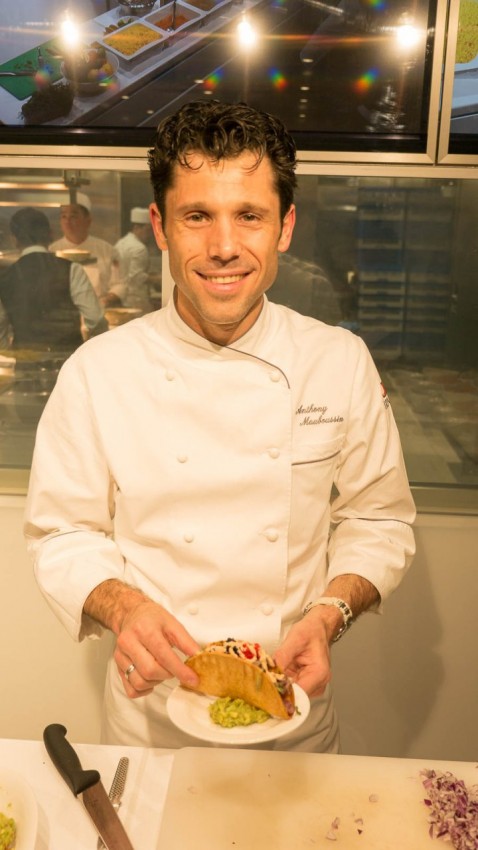 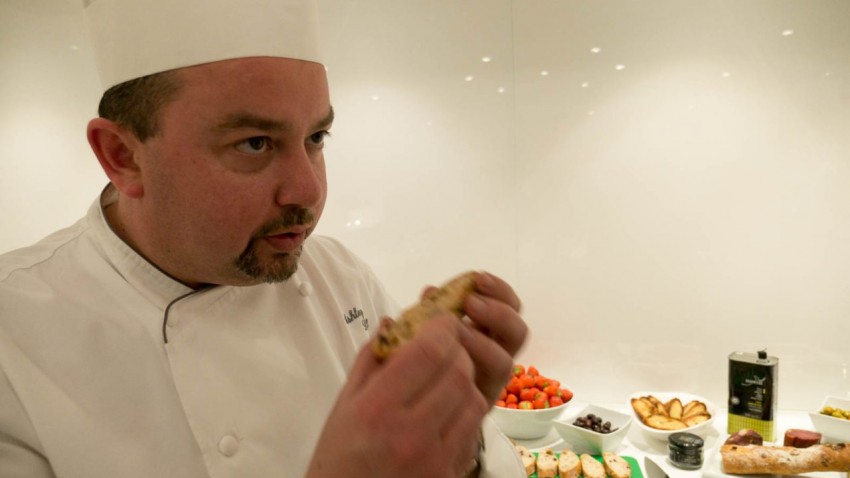 [/media-credit] Baquette Basics
Ashley Duff shows us how to infuse a baquette with garlic and tomato. 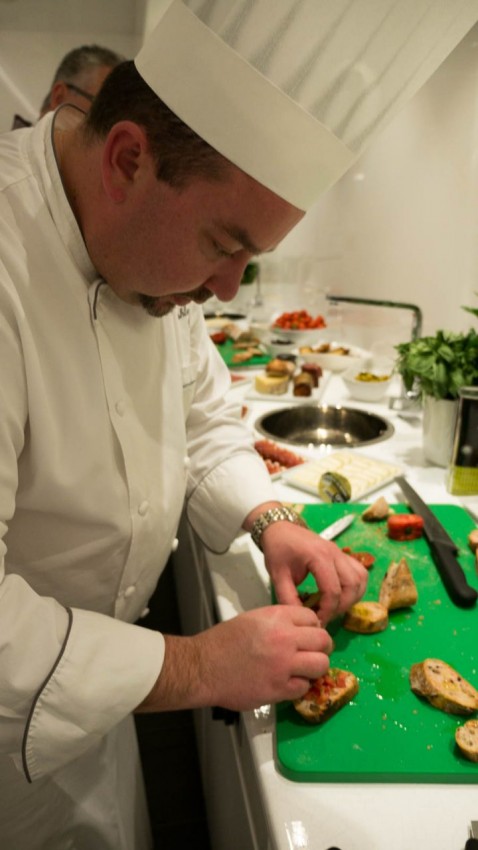 [/media-credit] Showing Us How It’s Done
Ashley Duff, executive chef, showing us how to prepare starters. 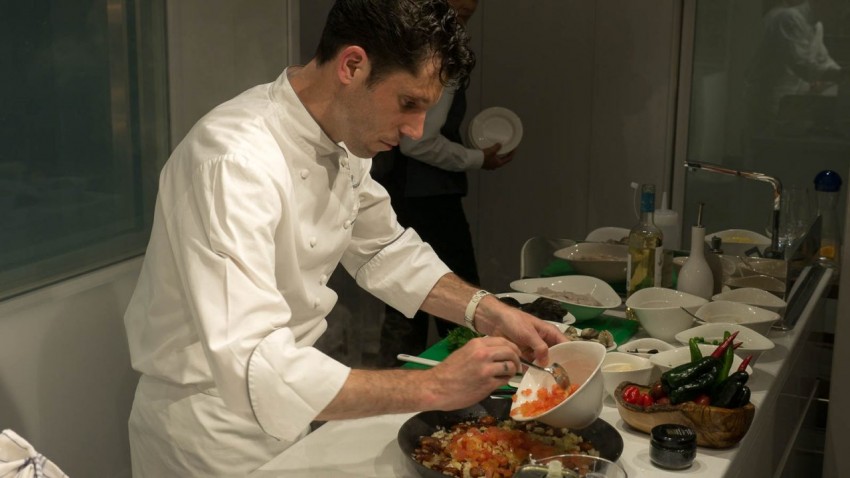 [/media-credit] Cooking Up Something
Anthony Mauboussin, director of culinary development for Viking Ocean Cruises, at The Kitchen Table. 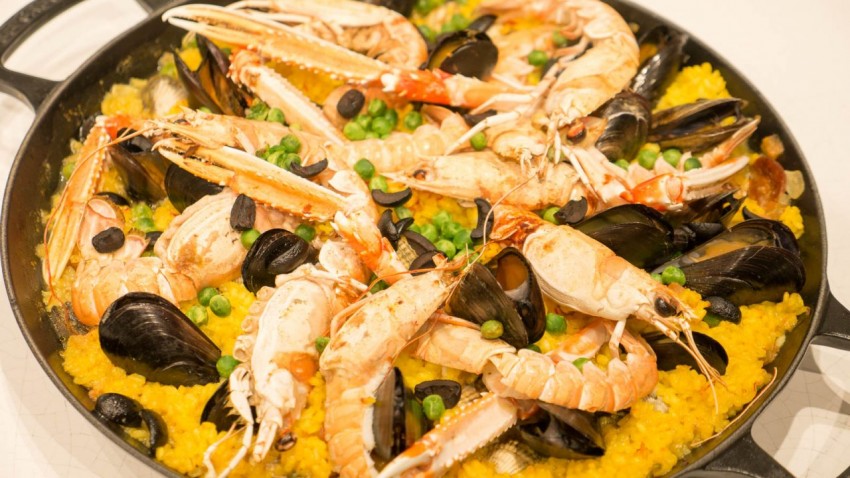 [/media-credit] Paella
At the Kitchen Table on Viking Sea. 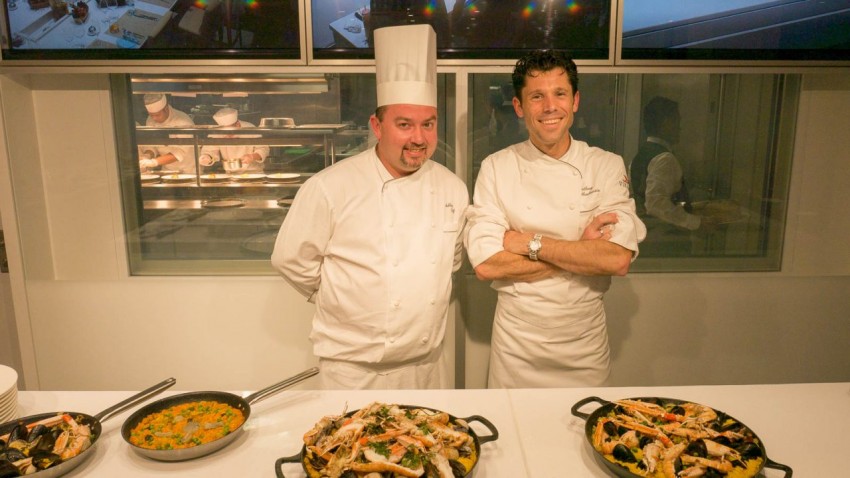 Proud of Their Paella
Anthony Mauboussin, director of culinary development for Viking Ocean Cruises, and Ashley Duff, executive chef, proud of their paella.

What I also liked about the “cooking class” was that we were able to do as much or as little as we liked, and also the fact that the champagne continued to be poured.

The chefs prepared some beautiful dishes, including a gorgeous paella with the fresh seafood we had purchased at La Boqueria. The evening was a fun one, with some really great food.

Viking bills The Kitchen Table as “an unforgettable, one-of-a-kind opportunity to shop, cook and eat with the masters.” I couldn’t agree more. Worth $199 per person? If your experience turns out to be anything like ours, you’ll find it to be memorable and enjoyable, and it’s hard to price on that. Check out the photos in this post, and let me know what you think.

Share your thoughts on “On Viking Sea: The Kitchen Table Experience”