Posted on May 3rd, 2016 by Elizabeth Cody in Outposts

Lalibela received its name from King Lalibela, said to have been destined for the monarchy by a vision from his mother of the baby swarming with bees. During his childhood and adolescence, Lalibela spent time in Jerusalem and Jordan and subsequently name several areas in the city after what he saw in these foreign lands. The construction of the city of Lalibela was the King’s response to Jerusalem’s conquest by the Muslims; the King’s attempt to build another Holy Land. The city is filled with churches carved from single stones, said to represent the Christian values of humility and spirituality. UNESCO has recognized many of these churches as World Heritage sites. 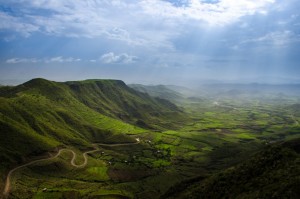 The “rock-hewn churches” are separated into 3 regions: North, West, and East. Just a few of these fascinating churches include:

Bet Medhane Alem: The architecture of this stone church more closely resembles an ancient Greek temple in design than an Ethiopian church. The stone structure is massive and majestic, considered the largest rock structure in the world at 109 feet by 77 feet in perimeter and over 37 feet high. The church is surrounded by 34 rectangular pillars, with 3 joined at the corners thought to represent the Holy Trinity. Scholars believe the church is a replica of the St. Mary of Zion church located in Aksum. The church is also home to the golden Lalibela Cross, said to have healing powers for those it chooses to bless.

Bet Maryam: This church is connected to Beth Medhane Alem by a tunnel. Bet Maryam is a small but ornate church, the only one sporting porches extending away from the entrance. This church is dedicated to the Virgin Mary, making it a popular destination for pilgrims to visit. The church also has windows believed to represent both the Crucifixion and the Holy Trinity. The interior of the church sports frescoes and arches decorated with dragons and eagles in a very European influenced architectural style. 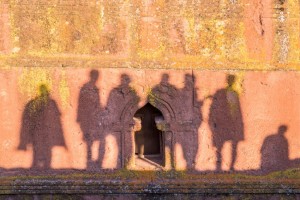 [/media-credit] The shadows of the people on the side of an ancient church.

Bet Golgatha: At the end of the Bet Maryam courtyard is the Bet Golgatha church. This church is the only one of Lalibela’s many stone churches with cruciform pillars. The church is technically split into two, the first Bet Mikael and the second Bet Golgatha, which women are forbidden to enter. Bet Golgatha also holds some stunning examples of Ethiopian Christian art and carvings.

Bet Giyorgis: Translating to “St. George’s Church”, Bet Giyorgis is 49 feet high and considered one of the most visually perfect of the rock-hewn specimens. This church is shaped in the figure of a Greek cross, requiring no internal pillars in order to keep the structure intact. The church is remarkably well preserved and filled with light, and one of its many treasures is a set of olive wood boxes believed to have been carved by King Lalibela himself. The walls themselves hold secrets, however: mummified corpses. 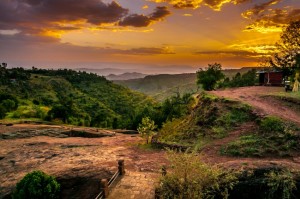 The valley of Lalibela at sunset

Bet Amanuel: Considered by many to have been the private chapel of the royal family, Bet Amanuel is one of the most meticulously carved of the stone churches in Lalibela. The alternating extending and recessed panels of stone mimic wood panels in the Aksumite architectural style. This church, like Bet Giyorgis, also contains graves in the walls of pilgrims who requested that the sanctuary of the church be their final resting place.

For more information on Ethiopian Airlines, visit them online at www.ethiopianairlines.com