Become the Exception: Myth #1 – Selling is a Numbers Game | TravelResearchOnline

Become the Exception: Myth #1 – Selling is a Numbers Game

Posted on June 13th, 2016 by Mike Marchev in Reading Between the Lines

Undoubtedly you’ve heard this one before: Selling is a numbers game. Make the calls, make the presentations, work your way through enough people, and eventually you will make a sale. I’m not saying this is totally false, but raw volume does not necessarily produce success. And even if it does, it’s the hard way.

Rather than thinking of sales as a game of large numbers, begin to think of sales as a game of darts. By aiming your effort (the dart) at a clearly defined target (your pre-qualified prospect dart board), your chances for hitting the mark (a sale) are greatly enhanced. Contrast that mindset with a pure numbers game, where you buy a lottery ticket or throw a handful of marbles up in the air hoping one or two land in a paper cup.

If you want to save yourself a lot of time, money, and frustration, know who you would like to do business with. Your chance for success is much higher if you direct your efforts conscientiously toward a list of defined prospects. This concept is called “bracketing.” 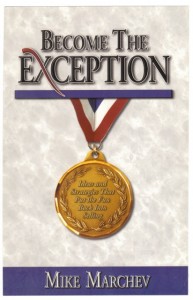 Click here to grab your own copy of “Become the Exception”

Bracketing is the systematic process of zeroing in on a designated target. Let’s use the game of golf as an example of bracketing in action. During a Merrill Lynch corporate golf outing I attended in Tucson, Arizona, Al Geiberger was the guest PGA golf professional. He was positioned on a par 3 hole all afternoon as each foursome of company representatives played on through. Al’s job as guest pro was to hit a fifth shot on behalf of the team to see if he could score a hole in one.

Before the first group arrived, Al hit a single shot to check the distance, wind, and range. This first shot fell a little short and to the left of the flagstick. Mr. Geiberger mentally recorded the results. After making a few mental and mechanical adjustments he hit a second ball and watched its flight. This time the ball landed a little long and to the right of the flagstick. Again, he adjusted his mechanics. His third shot was pin high and left. After making the final adjustment, his fourth shot was right on the money. After mentally recording and locking in the swing mechanics for shot #4, he could then duplicate the shot, impressing the bajeebers out of each passing foursome. Al was within six feet of the pin for the rest of the afternoon.

This is how bracketing works — a trial and error, adjustment setting exercise designed to zero in on a given target. Bracketing in sales works the same way. First, you have to lob some effort in the direction of a specific goal (your specified prospects). Then, watch what happens, make an adjustment, and try it again. Keep on tweaking until you have a method that results in the prospect becoming a client.

Here is a specific sales bracketing effort you can try on for size: Make a list of five qualified prospects you have decided you would like to do business with.

Next, write down three ways you can improve awareness of your products or services among these prospects. Initiate the awareness program and record your results from the first round attempt. Now, make some adjustments to the program and try again (either on the same five prospects or on a new set of five). Record and adjust again.

Continue until you are, as the pros say, in the zone. Finally, apply your refined method to a new group of targeted prospects.

One caution: Bracketing will not necessarily work with prospects you have not qualified. Try this and you are really back to the old lottery numbers game. Trying to bracket here is like Al Geiberger trying to drop his shot near the hole when the winds gust on and off up to 40 miles per hour and come from all different directions at any time. Likewise, unscreened prospects are coming from all different directions in terms of what they want and need. You’ll miss the green and get discouraged.

Let others waste their time chasing raw numbers. Identify your target and then use bracketing to become successful by design. There will be very little luck to your sales campaign.

Share your thoughts on “Become the Exception: Myth #1 – Selling is a Numbers Game”