Posted on June 7th, 2016 by Elizabeth Cody in Outposts

Whenever you mention Australia, almost everyone’s mind falls on the metropolis of Sydney. This city is rich in both the natural and modern wonders, from gorgeous beaches to architectural marvels. Even in this urban landscape, adrenaline junkies can find their thrills either in the trees or scaling man-made steel above the rippling waters of the Harbor. Discover all that Sydney has in store for you with Down Under Answers! 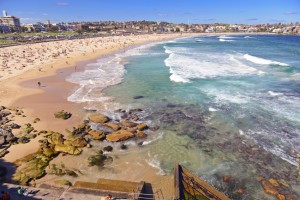 One of Sydney’s most popular beach hotspots, Bondi Beach derives its name from the Aboriginal word for “water breaking over rocks”. This beach is one of the closest to the center of Sydney proper, and is world-famous for its crashing waves and prime surfing. Those not as enthusiastic about riding the waves can swim in the saltwater baths, use the outdoor workout area, or catch some air at the skate ramp at the south end of the beach. While alcohol is banned on the beach, there are coin-operated barbecues, ice cream vendors, and a gelato shop for cool treats and smoky eats.

For the best views of the city and the harbor, there’s no where else quite like the Sydney Harbour Bridge. Built in 1932, the bridge is the largest and heaviest steel arch in the world at 134 meters high. When it was constructed, the bridge was only a few centimeters from coming together after nine years of construction when heavy winds interfered, but eventually the two halves of the bridge were bolted together. On either side are stairs leading to the footbridge where pedestrians can take in the views or a thrill on the popular BridgeClimb. 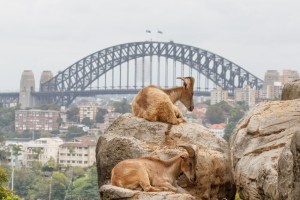 Spreading over a massive 185 acres, the Taronga Zoo houses some of Australia’s most recognizable local wildlife, as well as other creatures from all over the world. The zoo holds over 4,000 animals in its facilities, from the local platypus to the majestic Asian elephant. During certain times of the year Taronga Zoo will also hold other events, such as jazz concerts in the summer and special events coordinating with Sydney’s annual VIVID Festival. For adults and kids with energy to burn, consider trying out Wild Ropes, a challenging 90 minute rope course in either low or high level that takes you through the trees and to never-before-seen views of Sydney Harbour.

An iconic landmark in the city for tourists and locals alike, the Sydney Opera House has been prominently featured in movies and media since construction completed in 1973. Designed by Danish architect Jørn Utzon, construction of the Opera House took 14 years to complete, from 1959 to 1973. Utzon’s design was inspired by the harbor itself, including “sails” reminiscent of the many ships that came and went through the city’s waters every year. The Opera House has hosted dynamite performers such as Josh Groban, the Vienna, London, and Israel Philharmonic Orchestras, and off-Broadway performances of popular show-stoppers.

For more information on Down Under Answers, visit them online at www.duatravel.com.