In May, I cruised Holland America Line’s Koningsdam — but only for a short stretch from Rotterdam to Amsterdam. Attending the new ship’s christening ceremonies in Rotterdam, I disembarked two nights later in Amsterdam. Still, even in that short span of time, I got a feel for Koningsdam, and for the most part I liked what I saw.

Queen Máxima of the Netherlands christened Koningsdam, tied up adjacent to the Rotterdam Cruise Terminal, on Saturday, May 21. After the day’s events, as we were having dinner, the captain ordered the crew to throw off the bowlines, and Koningsdam set sail for Amsterdam. 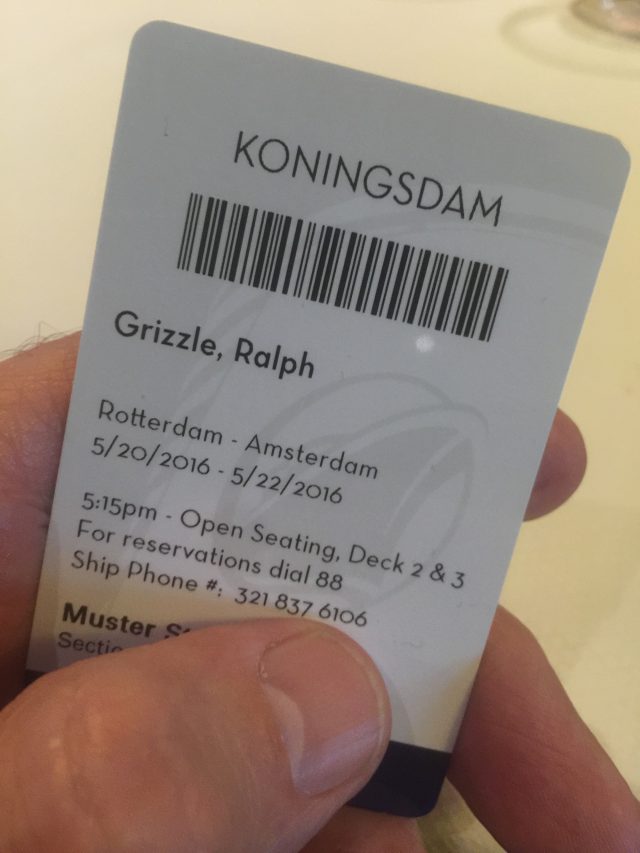 [/media-credit] I was only able to spend a couple of nights on Koningsdam, but I liked what I saw.

As we sailed from the terminal (and Holland America Line’s historic headquarters), thousands lined the banks to wave goodbye. It was touching to see so many people so endeared to Holland America Line, which has been sailing from Rotterdam for more than a century. In my stateroom 11044 video, which you’ll find below, I added some bonus material featuring our departure from Rotterdam. Few cruise lines, Cunard being the possible exception, evoke such feelings of excitement and nostalgia when they come into or depart from a port. 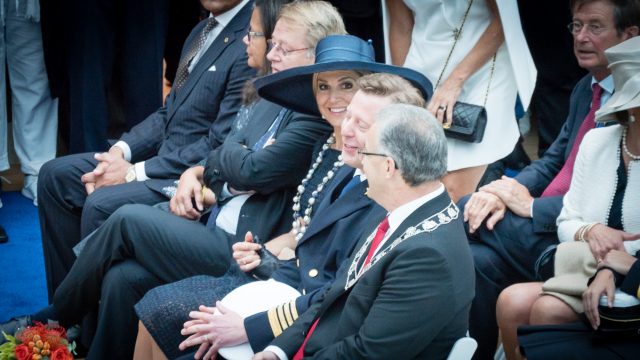 [/media-credit] Hi there! Her Majesty Queen Máxima of the Netherlands, godmother of Holland America Line’s Koningsdam.

A few hours out of Rotterdam we witnessed a spectacular display of fireworks commemorating Koningsdam’s christening. I’ve never seen a celebration done quite like this. Most times the fireworks flare before the ship sets sail. This was a nice touch that allowed us to have dinner then stand on our balconies to watch the fireworks light up the night sky. 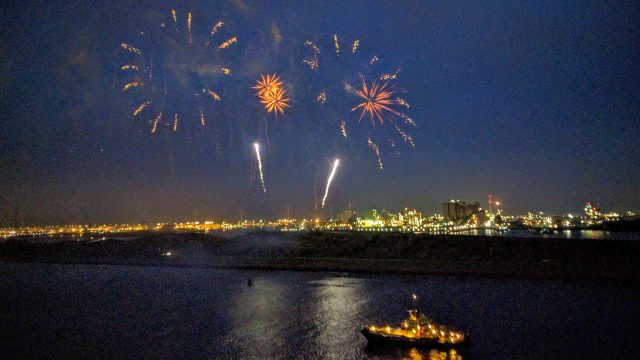 On Avid Cruiser, we’ve featured What Sets Koningsdam Apart and Four Things To Like About Koningsdam. Here are a few of the things I appreciated during my short sailing.

Carrying 2,650 passengers, Koningsdam is Holland America Line’s largest ship ever. The extra space allows for some exciting venues, including one of the best entertainment spaces I have seen on a mid-sized vessel, the excellent World Stage.

What made the screening even more powerful, however, were the classical musicians who performed the program’s score live on the stage in front of me. I would have liked to have included a video of the screening but I am certain the BBC’s work is copyrighted. Instead, I offer a photo. To truly appreciate the magic of the World Stage, you simply have to be there. 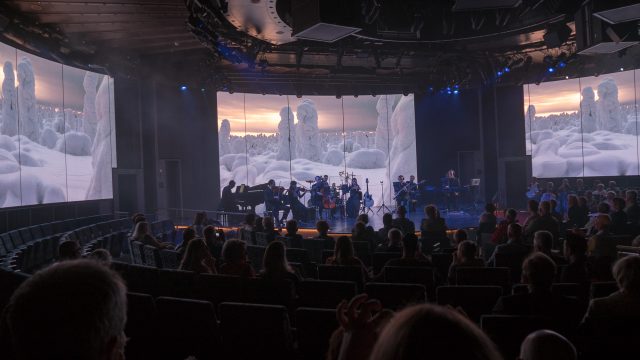 [/media-credit] We watched a screening of BBC’s Frozen Planet while seated in Koningsdam’s World Stage.

I also enjoyed B.B. King’s Blues Club, part of the Music Walk, which also includes Billboard Onboard and Lincoln Center Stage. I’ve included a short video clip to give you a taste of what two of these three venues are like (I missed the Billboard Onboard performance).

Had I filmed B.B. King’s Blues Club later in the evening, you would have seen the dance floor packed.

I began my morning with room service. The menu featured a good selection of breakfast items, all delivered at no charge to my stateroom.

Lunch offered several options, including the Lido Market buffet with its many stations serving up just about anything you could think of. Afternoon, I took a seat in the Grand Dutch Cafe for cookies and coffee (for an extra charge). Situated in an extremely pleasant setting midships, the Grand Dutch Cafe just may be the heart and soul of Koningsdam. It certainly was one of my favorite spots.

In the evening, I dined at the Pinnacle Grill. I was somewhat surprised by how much one could potentially spend here. The base cost at this reservations-only restaurant is $39 per person. For that, you get a broad menu that will satisfy most guests. On top of the $39 fee, however, you could dish out an extra $45 for caviar and another $59 for Holland America President Orlando Ashford’s Cut of 36-ounce rib eye.

For $10, you could get a 5-ounce lobster tail or $20 would get you the 12-ounce lobster tail. Wines and other alcoholic beverages also came at an extra charge. Nonetheless, I dined in the Pinnacle Grill both evenings, and the dining experience on each was top notch. Worth nearly $80 for two, plus another $40 for wine? That’s for you to decide. My feeling is that for such a wonderful dining experience, it’s probably worth the splurge.

On my first night on board, we enjoyed a special dining event in the Pinnacle Grill, which is available for guests: a menu from Jonnie Boer’s three Michelin-starred De Librije. The cost: $69 per person with two-ounce wine pairings for each of the four courses (you could upgrade to 5-ounce pours for an additional $20 per person). You’ll see photos of some of Boer’s creative dishes in the slideshow below. During dinner, I sat next to Carnival Corporation’s Micky Arison, who was photographing and Instagramming each dish, me along with him.

Measuring 228 square feet, my stateroom (11044) was capable of sleeping three, though I’d feel claustrophobic and crowded with a trio traveling with me in this room. The space is much better suited for two. If you are bringing along family, however, stateroom 11044 connects to the adjacent room. Check out the video and slideshow for a tour of the stateroom and some of its features.

Overall, I liked the stateroom quite a bit. I particularly appreciated the abundance of outlets, European, North American, and USB outlets. The latter were particularly handy for charging my iPhone, iPad, and other USB-powered devices.

The bedding was also nice, comfortable as you’d expect, and I appreciated the soft bathrobes tucked away in the closest. One thing I did note was that Koningsdam offers unlimited laundry service. For a seven-day cruise, you can launder all that you like for $63.

I’m a big fan of the two designers who worked with Koningsdam, Bjørn Storbraaten from Oslo, Norway, and Adam D. Tihany from New York. The two could not be more different, nor more alike. One from Norway, the other from New York, yet both by complete coincidence wore red eyeglasses when they met on Koningsdam during the christening events. Is this just something that designers do? I looked at my own black frames and decided it was time for a little more flair. Next time you see me, I may be wearing red or blue eyeglasses.

Storbraaten was the architect for Holland America Line’s Signature of Excellence program. He designed Eurodam and Nieuw Amsterdam, both popular ships in the Holland America Line fleet. Evolving Holland America Line has been a slow and thoughtful process. The company wants to attract new (and younger) cruisers while remaining true to its older Mariners. Striking that balance can be like walking a tightrope. With Zuiderdam, a bold design departure for HAL back in 2001, the company almost fell off the rope.

Tihany is the designer for Seabourn Encore and Ovation, operated by Holland America Line’s sister company, Seabourn. He referred to Koningsdam’s design as being “sexy.” The ship definitely is more curvaceous than past HAL vessels, something that Storbraaten also noted when he discussed the ship’s design ethos.

There’s also a bow to tradition in the ship’s design. In concepting the Grand Dutch Cafe, Tihany told me that he aimed for doing something “whimsical that pays homage to what the Dutch are known for.” Thus, the cafe features the profile of the narrow buildings that you’d find along the Amsterdam canals, the Delft (blue) colors, bright flowers, and even the small ceramic buildings that are reminiscent of the Delft Blue Houses that KLM has distributed to its World Business Class passengers since the 1950s.

Discovering the Grand Dutch Cafe is akin to being in a Dutch city and rounding a corner to come upon a beautiful Dutch cafe, Tihany told me. “I was trying to create surprise and delight around every corner,” he said. “It’s not just a ‘wow’ moment. It’s the fact that you discovered something that you weren’t expecting. This is what makes a journey magical.”

And that sense of surprise and delight is also what makes a magical — and memorable — journey on Holland America Line’s new Koningsdam — even one that lasted only 48 hours.

Share your thoughts on “Koningsdam Review: A Quick Peek With Photos & Video”