Scandinavia Cruises: Viking Wants To Be Your Best Choice | TravelResearchOnline

Scandinavia Cruises: Viking Wants To Be Your Best Choice

Posted on July 1st, 2016 by Ralph Grizzle in Deck Plans

With its Norwegian roots and Norwegian-flagged ships, Viking says no other company does Scandinavia cruises better. True? You be the judge.

Viking’s Norwegian-born chairman wants to convince you that his company owns cruising in Scandinavia. While it may be arguable that no other cruise line does Scandinavia better than Viking, there can be little argument that Viking’s two vessels seem ideally suited for showing you Norway and the broader region of Scandinavia in true Nordic style. 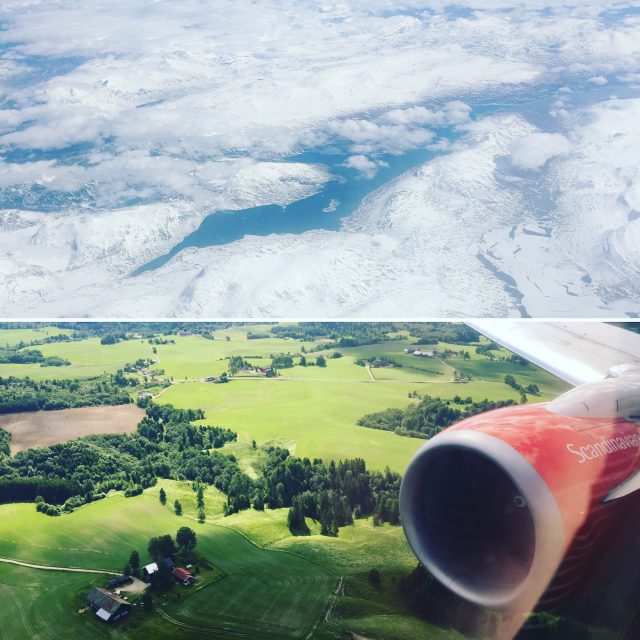 [/media-credit] Two views of the Norwegian landscape while flying from Oslo to Tromsø to board Viking Sea.

For starters, Viking’s two ships are Norwegian-flagged, and both make you feel as if you are in Scandinavia the moment you step on board. That’s because of their Nordic design, with light woods and beautiful fabrics throughout. And it’s not only the ships that are Nordic. Hagen and several others in Viking’s upper management are Norwegian. Some of them grew up in the regions that Viking’s vessels visit on Scandinavia cruises. 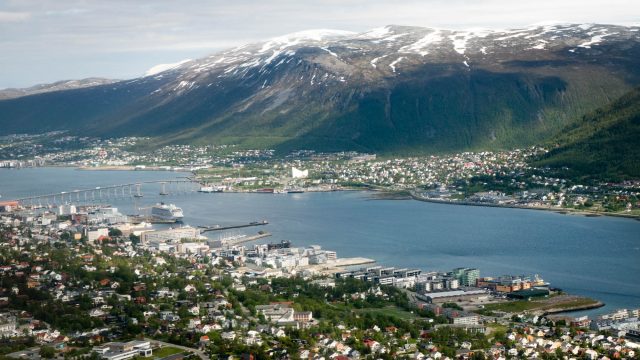 [/media-credit] Viking Sea spotted near the bridge in Tromsø.

“I think what we look at first of all is our knowledge about this part of the world and the itineraries that we have here,” Hagen told me during an interview on Viking Sea. “We are quite qualified to claim it [that Viking owns Scandinavia]. We have both of our ocean ships operating here this year; next summer there will be three of them.”

Along with two of my journalistic colleagues, I traveled with Hagen, who is chairman of Viking Cruises, and his daughter Karine on a 15-day Into the Midnight Sun itinerary. The itinerary spans the northernmost reaches of Norway and visits the remote outposts of Scotland’s Shetland and Orkney islands, both of which have close historical ties to Norway.

We also visited Edinburgh before our cruise terminated in Harwich, about a two-hour transfer from London’s Heathrow.

Spanning 15 days, and with included and optional excursions, the itinerary was immersive. Several shore excursions were offered in each port of call, including many that helped guests get to know the locals. “I think what we’ve learned is that our guests really like to engage with the destination, not just observe it,” Karine Hagen told me. She added that engagement that shows guests the local way of life is extremely popular, and that is what Viking is aiming to deliver on its Scandinavia cruises.

During my cruise, Hagen, along with Erling Frydenberg, his friend and colleague of many years, showed us some of his favorite shore experiences in Norway, highlighted in the photo slideshows below.

Above the Arctic Circle, Tromsø is considered to be the gateway to the Arctic. Viking offered six shore excursions here, including one at no charge, a three-hour overview tour of Tromsø’s architecture , including the stunning Arctic Cathedral, and a visit to the world’s northernmost botanical gardens.

We joined Hagen and Frydenberg for the two-hour tour of the world’s nothernmost brewery, Mack’s Ølbryggeri, an optional tour that goes for $59 per person. Afterward, we returned to Viking Sea for a feast of some of Hagen’s favorite Scandinavian foods, served in the Kitchen Table.

Viking’s included 3.5-hour tour featured the North Cape, where cliffs rise more than 1,000 feet above the sea to an expansive plateau where Europe’s northernmost point is marked by a globe. We snapped photos of ourselves standing at the globe and afterward we had just enough time to join the King Crab Safari, an optional 3.5-hour tour that goes for $209 per person.

We missed the boating excursion itself but not seeing the catch, live King Crabs, which can measure up to 6 feet from claw tip to claw tip and weighing up to 22 pounds. The crabs were prepared over an open fire in a Sami tent. Served with Norwegian flatbread, they were delicious.

In Bodø, the included tour was a cathedral concert, which those who attended said was marvelous. We, however, went “deep sea” fishing, plunging our lines into 100 feet of water. Some of us reeled in fish, which we prepared, steamed and consumed with Aquavit, an authentic Norwegian experience if there ever was one.

In Alesund, the included tour took guests to an open-air museum. This was the Hagens’ last day on board, so I stayed behind for final questions and interviews. In the afternoon, I hiked through the town center to begin the 418 steps up to Fjellstua for gorgeous views over the city.

In Lerwick, I joined the included Shetlands Natural & Historic Treasures tour and then stretched my legs by walking up to the highest point overlooking the city and then nearly 2 miles back to the ship.

I wanted three things: an amazing overview of the city, a long walk and a good pub.

1. Viking Is Scandinavian. Torstein Hagen carries a Norwegian passport. His vessels are Norwegian-flagged. Both of his ocean-going ships feature interiors that are Nordic-inspired (though by an American designer). Scandinavian food is always available; at Mamsens, where you’ll find Norwegian waffles and a dollop of cream with Norwegian brown cheese and fresh berries; in the World Cafe, where you’ll find fresh seafood from Norway, including delicious crab legs and Norwegian Salmon; and in the main restaurant. In fact, there is a great sense of continuity between the Viking vessels and the Nordic destinations that they visit. See 7 Reasons Why Viking Sea May Just Be The Best Ship Sailing – And 1 Reason Why It Is Not

2. Three Ships Operating in Scandinavia Next Year. Viking Sky will join Viking Star and Viking Sea in 2017. Viking will operate three ships on Scandinavia cruises in 2017, giving you lots of choice.

3. Immersive itineraries and long stays in port. Viking always includes at least one tour, then it’s up to you. You can do an optional tour or explore on your own. Plus, enrichment lectures on board prepare you for what to expect and give context to what you have seen and experienced.

“No other cruise line can show you this part of the world like Viking can,” Torstein Hagen told an audience at a reception on Viking Sea during our sailing. “I have known for years that there is nothing better than Norway in the summer, and I am happy to now be able to share the beauty of my native Norway with you, our Viking guests.”

So does Viking do Scandinavia cruises better than any other company? Clearly, Viking feels it has the home court advantage in Scandinavia, but to a large degree it’s a matter of personal preference.

Some will want big ships with lots of evening entertainment (if this is you, Viking may not be your best choice); others will want small ultra-luxury vessels where champagne is poured freely any time of day. Still others may want the ruggedness of Hurtigruten, which plies along the Norwegian coast year-round with rather basic dining and accommodations.

As for me, I enjoyed being on a ship that flew the Norwegian-flag under the midnight sun and was welcomed in ports by Norwegians speaking their native tongue to the captain and the Hagens.

I appreciated the sense of continuity between the ship, with its Nordic design, and the destinations we visited. It felt as though we were in a floating Scandinavian boutique hotel.

I also appreciated the Norwegian specialties that I could consume on board — Norwegian salmon, crab legs, and Norwegian waffles — without paying an arm and a leg ashore. Viking’s inclusions, at least one tour in each port of call, WiFi, beer and wine with lunch and dinner, also appealed to me and other travelers who I spoke with during my cruise.

There are many choices when choosing Scandinavia cruises, but those seeking to do so in true Nordic style will find Viking to be an extremely good fit. The company is working hard to be the best when it comes to helping you experience the region that Viking calls home. 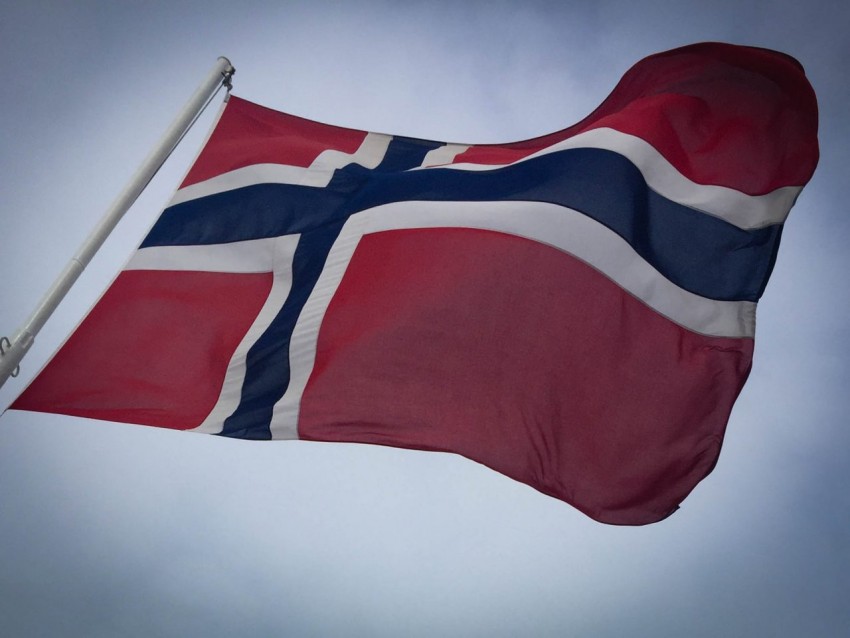 Share your thoughts on “Scandinavia Cruises: Viking Wants To Be Your Best Choice”