This story originally appeared in Cruise Week by Ralph Grizzle

When coming up with the design of what is being billed as the “most luxurious ship ever built,” Frank Del Rio gave designers only a single image to work with. It was of a corridor in a luxury hotel.

“I leaf through a lot of magazines,” the President/CEO of Norwegian Cruise Line Holdings told reporters on Regent’s pre-inaugural sailing, “and I happened to come across this image. At the moment in time, I said, ‘You know, that’s what I want.’”

The hotel corridor was classic, with what appears to be marble floors, white walls, and chair railing, columns, and a couple of modest chandeliers.

What was it that he saw in the image that he wanted for the design of Regent Seven Seas Explorer? “Timelessness,” Del Rio said. “I wanted this ship to be as relevant to the luxury market 20 years from now as it is today. It’s not a fad, it’s not the color of the day, it’s not the cool thing that’s going around now. This is something that will stand the test of time.”

Fast forward a few years: Regent Seven Seas Explorer features hundreds of crystal hand-crafted chandeliers, classic décor, lots of Murano glass, and scads of Carrera marble and granite, over an acre of each.

In the restaurants, you will find custom Versace and Bernardaud china. Artwork, nearly all handpicked by Del Rio and his wife Marcia, includes a pair of Picassos that adorn the entrance to the Regent Suite. Another pair of Picassos hangs in the bar of Prime 7, the steak house on Seven Seas Explorer.

The Costs Behind Timeless Luxury

To achieve the timeless look, Regent budgeted $450 million to build Seven Seas Explorer, and even that sum was not enough. Designers went over budget but by how much Del Rio would not say. One estimate puts Seven Seas Explorer at $609,000 per berth. Even at budget, the vessel is the most expensive luxury ship ever built. 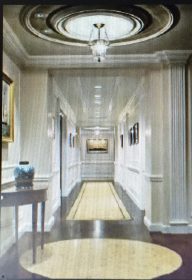 The inspiration, from a magazine.

“The sky was the limit for our designs,” said Kim Lanza, project manager for iCrave, the firm that designed the Constellation Theater, Chartreuse French restaurant, Prime 7, and La Veranda. iCrave focused on lavish details, such as handmade mosaic tiles and hand-blown Murano glass sconces.

There are other examples of extravagance, such as the 4,443-square-foot Regent Suite. Regent spent $150,000 on the Savoir No. 1 bed alone.

At $10,000 a night, the suite’s living room features a custom Steinway Maroque piano (cost: $250,000) by famed designer Dakota Jackson. An authentic Tibetan prayer wheel outside of the Pacific Rim, the new Asian restaurant, set Regent back $500,000.

The prayer wheel weighs 6,000 pounds and required additional structural support. “We could have made it lighter if we’d built it of resin, but it would not have been authentic,” said Greg Walton of CallisonRTKL, one of the design firms charged with creating Seven Seas Explorer. “It’s luxury because it is the only one in the world.”

The all-suite vessel boasts one of the highest space ratios (75) in the luxury segment. Space, in fact, represents one of the qualities Del Rio says makes Seven Seas Explorer worthy of the claim of “the most luxurious ship ever built.”

“In the restaurants, you’re not huddled,” Del Rio said. “You don’t have the table right next to you right on top of you. There’s space between the tables. Look at the theater. Besides being two stories, you’ve got room to roam.”

Of course, dining and service also make for over-the-top luxury. “The highest paid person on board is not the captain,” Del Rio said. “It’s the chefs. So we have to pay top dollar to recruit top talent.”

Indeed, my dinners in both Chartreuse and Pacific Rim were among the tastiest I’ve had. In Chartreuse, I enjoyed roasted milk-fed veal filet with raspberry and rhubarb marmalade accompanied by sautéed Swiss chard. Clearly, Regent is aiming to emulate Michelin-star dining found in the world’s best restaurants ashore. In total, there are five restaurants on Seven Seas Explorer.

Seven Seas Explorer is an unusually personal creation for the ocean side of the business. The ship is a reflection of what Frank Del Rio views as luxury—space, style, elevated service, and dining.

Is Seven Seas Explorer the world’s most luxurious ship? It is in the mind of Del Rio, and it may well be for you, too.