Posted on July 8th, 2016 by Ralph Grizzle in Deck Plans

On Thursday, July 7, I board Regent’s new Seven Seas Explorer in Barcelona. I’ll only be on board for four days, which is not nearly enough time to explore what Regent is billing as the “world’s most luxurious ship.”

In case you’re curious why my voyage is so short, it’s because I head to Vienna on Sunday, July 10, to preview Crystal Mozart for two nights. The heavily refurbished vessel represents Crystal Cruises’ foray into river cruising, and I can’t wait to see how Crystal had transformed a ship I sailed on several years ago under the Peter Deilmann River Cruises banner. 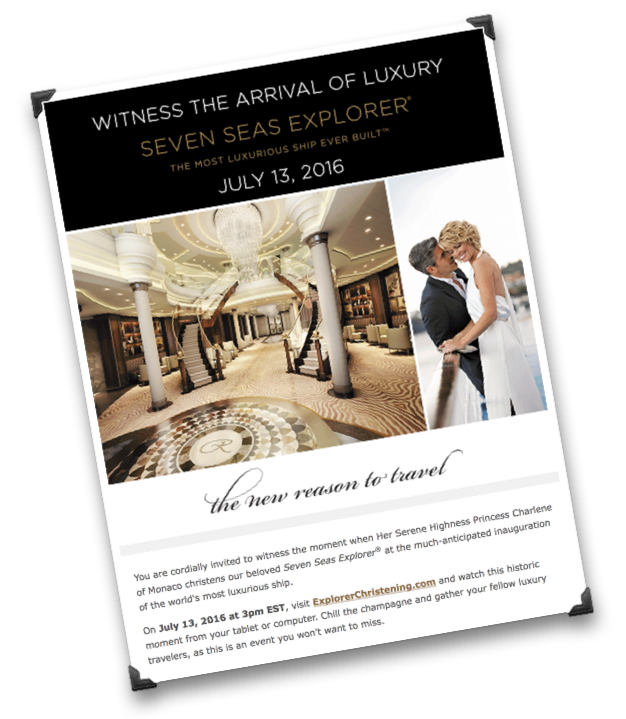 I’m equally as excited to see Seven Seas Explorer. If you’d like to follow my four-day preview voyage on Regent Seven Seas Explorer July 7 through July 10, be sure to click on Avid Cruiser, @avidcruiser, Facebook and Instagram. Unfortunately, I will miss Seven Seas Explorer’s christening event on July 13. By the way, if you want to see how Crystal Mozart is shaping up, check out this link on July 10, 11, and 12. 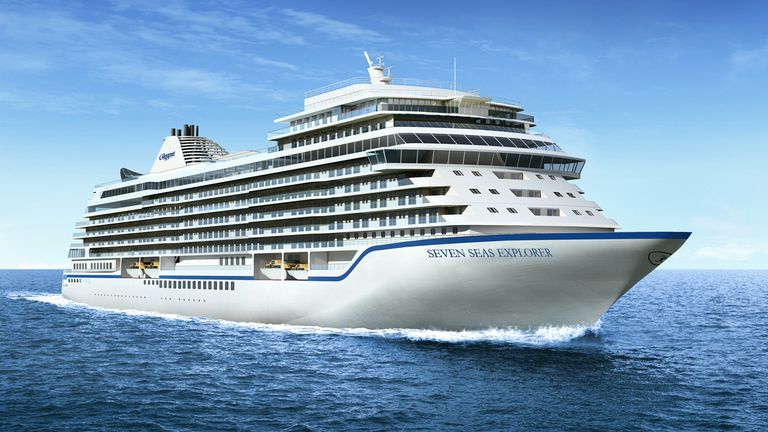 [/media-credit] Regent’s Seven Seas Explorer is Regent’s first newbuild in over a decade.

An all-balcony, all-suite ship like Seven Seas Mariner, Regent’s new Seven Seas Explorer, built at a price tag of US $450-million, begins sailing in this month. The line is pulling out all the stops for what will be the first new build constructed for the luxury brand in more than a decade. On July 20, 2016, Seven Seas Explorer will officially set sail on her maiden voyage. Regent calls her, “the most luxurious ship ever built,” and she very well might be.

In the works since 2008, the 750-guest Seven Seas Explorer will offer some of the largest and most luxurious suites at sea. If early renderings are any indication, her interiors will be nearly unparalleled in the industry; an impressive fact considering the kind of competition Regent is up against from competing lines like Crystal Cruises, Seabourn and Silversea.

She’s not the biggest ship to set sail this year, but she could very well be one of the most important; her massive Regent Suite will see that her arrival does not go unnoticed.

Here are just a few points of differentiation found aboard the upcoming Seven Seas Explorer: 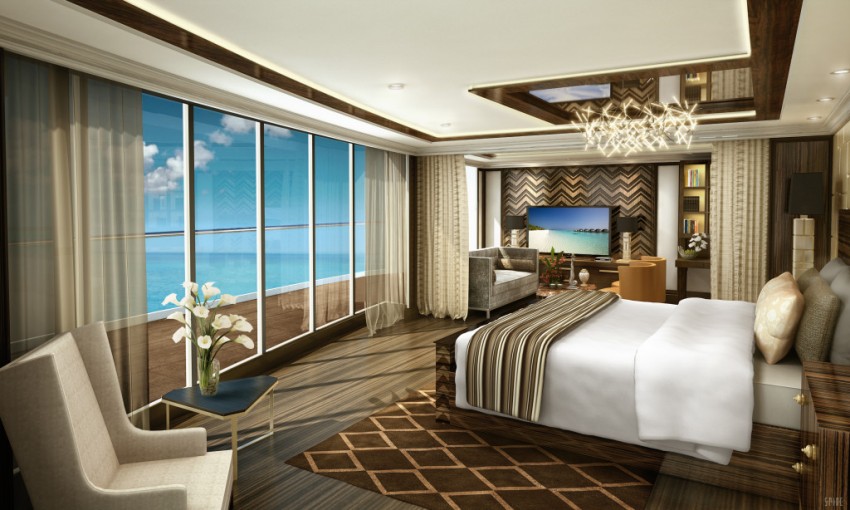 [/media-credit] An artist’s rendering of the bedroom in the sprawling Regent Suite aboard Seven Seas Explorer.

Aboard Seven Seas Explorer, guests will stay in one of 375 spacious suites. Each room aboard the ship will feature its own private balcony, and 93 percent of those will have verandas larger than 83 square feet. That’s as large as some early interior cruise ship cabins were 20 years ago. Regent calls this a “spacious outdoor oasis for guests to enjoy the scenic vistas and ocean breezes in total comfort.”

Master Suites offer chic Park Avenue styling, replete with rosewood polished furniture and crystal chandeliers. These two-bedroom suite features a modern sophisticated and elegant design. Located at the bow of the ship on decks seven and eight, the four Master Suites measure between 1,900 square feet and 2,100 square feet and boast spacious living areas with bars for entertaining and balconies up to 1,000 square-feet. Adjacent to each bedroom, guests will find ornate marble and stone bathrooms with shower and tub. 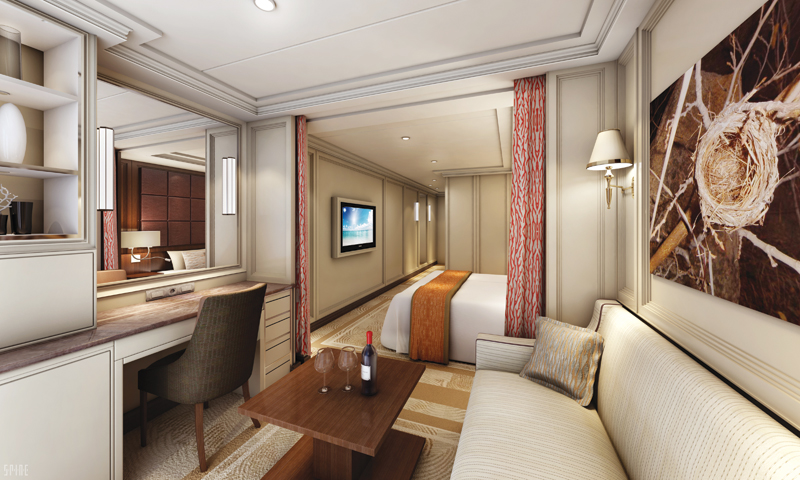 The Seven Seas Suite was created by famed interior designer Dakota Jackson, who was an inspirational driving force behind the suites aboard Oceania’s Marina and Riviera. At Regent, Jackson created the glamorous look for the Seven Seas Suite.

The Seven Seas Suites offer between 825 square feet and 925 square feet of luxurious space, and exudes a cosmopolitan apartment feel with vibrant golden colored ceiling accents that reflect on the plush and tony furnishings. The rooms flow effortlessly from living rooms to dining areas to bedrooms, with sliding glass doorways leading to the spacious private balconies throughout. A magnificent white marble bathroom sits adjacent to the oversized bedroom.

[/media-credit] A rendering of one of the Explorer Suites.

Penthouse Suites are sumptuous and alluring, inspired in part by sapphire jewels. These can be up to 625 square feet with stylish entertainment centers that separate the living rooms and bedrooms. A marble-topped bar and intimate dining area welcomes guests upon entering the suite, as the sumptuous living room beckons them to move further into the suite. Sliding glass doorways in both the bedroom and living room lead to an oversized balcony with chic outdoor furnishings.

At the top of the pack is the Regent Suite. Coming in at a jaw-dropping 3,875 square feet, the suite handily steals the moniker of “largest shipboard suite” away from Cunard’s Queen Mary 2, which features the 2,249-square-foot Grand Duplexes that are spread out over two levels.

Nearly double in size, the Regent Suite aboard Seven Seas Explorer features absolutely everything designers could possibly think of, all complemented by a 958-square-foot balcony that’s bigger than six average mainstream cruise ship staterooms put together.

[/media-credit] The high standard of opulence set by the suites will carry through to the rest of the ship. Shown here is a rendering of the central lobby atrium.

Elsewhere on the ship, Regent’s Seven Seas Explorer boasts a number of firsts for the line, including the first culinary instructional center aboard a Regent ship, and a brand-new lounge. In the Culinary Arts Kitchen aboard Seven Seas Explorer, guests will be provided with an experience similar to that of one of the prestigious cooking schools in France, both in terms of layout and design. This isn’t designed to just be pretty eye-candy; this is the real deal, with 18 individual cooking stations spread out across three separate rows. Guests will use their very own cooking stations during classes for more personalized (and authentic) training. It’s not tucked away in the depths of the ship, either. Instead, it resides in a commanding perch high up on Deck 11, surrounded by floor-to-ceiling windows.

[/media-credit] Elegant dining is on the menu in Chartreuse.

In keeping with Regent’s small-ship feel, big-ship amenities philosophy, Seven Seas Explorer will sport a two-tiered theatre modeled after the golden age of Hollywood. Capable of seating 694 guests at a time, the Constellation Theater will be decorated with hand-blown Murano glass lamps crafted in Italy, complemented by the subtle and somewhat angelic motif of a swan.

While Seven Seas Explorer will have all of the dining and lounge venues that Regent loyalists have come to expect, she’ll also have a brand-new public room for the line.

Situated on the port side of Deck 5, the Meridian Lounge is located just steps away from the Constellation Theater and functions as the ideal pre-or-post show watering hole. Designed with taupe leather furnishings and dark wooden accents complemented by blue carpeting, the room will feature a proper dance floor that is situated adjacent to an intimate stage area that will host live musical performances.

In the end, Seven Seas Explorer seems poised to leave her guests wanting for little – just as a good luxury ship should.