Posted on August 9th, 2016 by Elizabeth Cody in Outposts

Scotland is a gruff but gentle neighbor to England, and a hidden beauty at that. From heather-covered moors to ancient castles, Edinburgh has just as much history and lovely scenery to offer as London with its own special spice. The people here are more down-to-earth than you would expect living in such a fairy tale city, and as such very little encroachment on the country’s animal and nature population have occurred over the years. Edinburgh is also saturated with culture thanks to many famous residents, including Emeli Sandé, Ian Rankin, or Robert Burns. 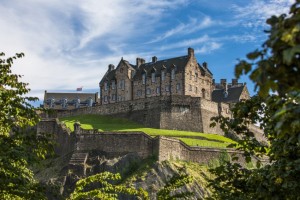 One of the historical highlights of the city, Edinburgh Castle entombs much of the royal history and remnants of Scotland’s long-gone monarchy. Built in the 11th century, the castle served as both the home of the royals and as a military stronghold for Scotland. The castle’s last great battle was in the mid-18th century, and now it serves as a military base for the British armed forces. The castle offers tours of the structure, where visitors can see the Scottish Crown Jewels on display, see the Stone of Destiny between coronations in its home, and the recreation of prison barracks. The castle sees over 1.4 million visitors each year who come to enjoy the exhibits, cafés, and shops within the castle walls.

Once the British Royal Family’s personal yacht, the Royal Yacht Britannia was decommissioned in 1997 and is now moored in Edinburgh at the Ocean Terminal. Entrance to the yacht comes with an audio guide in over 20 different language that provides insight into the personal lives of the Royal Family. The decor is reminiscent of the Queen’s coronation period of the 1950’s, with simple and uncluttered furnishings. The decks were built out of Burmese teak wood, which were scrubbed daily as quietly as possible to avoid disturbing the Royal Family, and all work complete by 8 am. Visitors can also see many of the gifts lavished on the Royal Family by foreign dignitaries, or enjoy afternoon tea in the Royal Deck Tea Room with many different teas and treats to choose from, and the Queen’s personal Phantom Rolls-Royce that was stored in a special garage onboard.

The Palace of Holyroodhouse is the official home for the British monarchy when they come to visit Scotland. The residence of Scottish royalty since the 17th century, including as the domicile of Mary, Queen of Scots, Holyroodhouse is now the current Queen’s residence for one week every summer when she holds meetings and parties on the grounds. This striking building was once the guesthouse for the nearby abbey, but King James V had it enlarged and extended for royal use. There is a rumor that a ghost haunts the halls by the name of “Bald Agnes” Simpson. Simpson was tried and executed as a witch during the hunts of the late 16th century, after she was tortured to confess her powers of witchcraft. In celebration of the Queen’s 90th birthday, the Palace is holding special exhibits, including a special display of the Queen’s wardrobe from her childhood to the present. 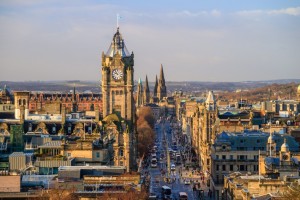 [/media-credit] The skyline of Edinburgh

Hidden underneath Edinburgh’s Royal Mile, Mary King’s Close is an underground series of tunnels and streets resembling a medieval city. After being abandoned for a quarter of a millenium, the Close was recently re-opened to the public in 2003 and offers general and special tours focusing on potential ghosts that haunt the Close. The Close is named after Mary King, a businesswoman in the 17th century who supported herself and her four children in the trade business, and earned enough respect and esteem to name the Close in her honor. Edinburgh is considered to be one of the best areas to find paranormal activity in Europe, and the Close certainly has plenty of stories to tell.

One of the loveliest sights in the city, the Royal Botanic Gardens is a stunning blend of British and Scottish garden mastery. The 70 acres of gardens include Victorian greenhouses and a renowned rock garden, perfect for meditation. Bright azaleas and other colorful flora fill the lush grounds, and throughout the year special tours or events are executed in the courtyard, including a jazz evening, seminars on edible gardening, and crafting classes. The gardens are over 400 years old and cared for by a team of specialists who are passionate about the flora that grows in each of the gardens.

For more information on Edinburgh and Flybe, visit them online at www.flybe.com.

Share your thoughts on “Discover Bonny Edinburgh with Flybe”