Posted on September 13th, 2016 by Elizabeth Cody in Outposts

On December 10, 1997, the capital of Kazakhstan was officially transferred to the city of Akmola. In line with the Presidential Decree signed on May 6, 1998, Akmola was renamed “Astana”. The new capital was unveiled internationally on June 10, 1998. In 1999, Astana was awarded the title of “The City of Peace” by UNESCO. Since 2000, the capital city of Kazakhstan has been a member of the International Assembly of Capitals and Major Cities. Astana is the northernmost capital city in Asia. At present, the territory of Astana makes up more than 722 square kilometers (279 square miles). 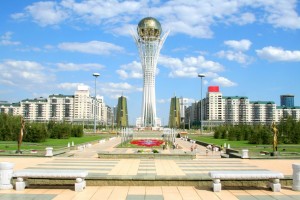 Astana is located in the centre of Kazakhstan, in the dry steppe zone and in the grass steppe subzone. The area holding the city stands above the flood plain, and the Yessil River is a major waterway of the capital. The city has an extreme continental climate with cold winter and a hot, dry summer. Astana’s favourable location in the centre of the Eurasian continent makes it an economically advantageous transportation, communication, and logistics centre, and a natural bridge between Europe and Asia.

The transfer of the capital to Astana gave a powerful impetus in its economic development. The city’s high economic growth rates attracted numerous investors. In the overall volume of Kazakhstan’s investments, Astana alone accounts for 10 percent, while the Gross Regional Product of the city amounts to 10.2 percent. 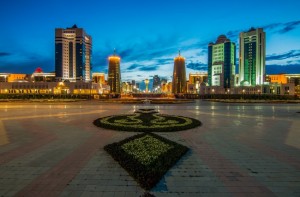 [/media-credit] The city centre of Astana at twilight

Astana is possibly one of the fastest-shifting cities in the world; if you leave Astana for just a month, upon your return you will see changes that would have taken other cities years to accomplish. Everything is new: the streets and the houses, statues and squares, quays and bridges. The Left Bank, the new administrative and business centre, is where most of these changes occur and the main attraction point for tourists. Many world-famous architects including Kisho Kurokawa, Norman Foster, and Manfred Nicoletti, just to name a few, have contributed to the city’s transformation. Ak Orda, Khan Shatyr, Bayterek, Hazret Sultan, Palace of Peace and Reconciliation and the House of Ministries are just a few of the more popular sights. Although Astana is primarily a modern city, some traces of its distant past can also be found throughout the old town districts. Within the city borders you will find the ruins of Bozok, a medieval settlement. As with any other large and rapidly-growing city, Astana can be considered a city of contrasts; as old, crumbling houses often neighbor modern luxurious buildings. It is a matter of time, of course, before the old buildings will be replaced.

[/media-credit] The skyline of Astana after dark

The Kazakh capital, Astana, will be a grand stage when it hosts EXPO-2017 after winning its candidacy bid in 2013, beating the city of Liege in Belgium. Under the general theme of “Energy of the Future”, the event will showcase the most notable achievements of mankind in the development of green energy. Kazakhstan is expecting more than 5 million people from 100 countries and dozens of international organizations to visit. The number will dwarf the current population of Astana, with its current population of 758,000 people. EXPO-2017 will give Astana new attractions and given the city’s high number of already eye-catching buildings and architectural marvels, you can expect the skyline to boast something equally spectacular. Previous exhibitions have left iconic legacies such as the world-famous Crystal Palace built in Paris for EXPO-1889. 113 hectares of land for the construction of the future Expo Centre has already been selected and promises to have a legacy of facilities and housing that will benefit the city and future generations of visitors.

Returning to the main theme of “Energy for the Future”, the Kazakh government aims to increase the share of renewable energy sources to 11% by 2030 and to show its commitment to such a target, and the exhibition area in Astana will have its energy solely provided by renewable energy sources, presenting a live “City of the Future” for the world to see and aspire to. Book your ticket now!

Book your flight to Astana with Air Astana and experience warm service from the heart of Eurasia. Visit them online at airastana.com.