Posted on September 30th, 2016 by Nadia Ali in Soundings

Key West is described as the southernmost city giving visitors a taste of the Caribbean without even leaving the US. The tourist board even states Key West is a “unique tropical island city.” However it is defined, Key West is alluring, entertaining and peaceful all at the same time with sightseeing tours conducted on conch trains down roads lined with Colonial houses. 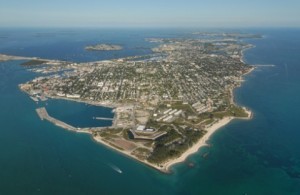 One of the coolest things to see is the conch train chugging its way through the streets of Key West. It originally began back in 1958 by Bill and Olive Kroll and has become a signature attraction. Visitors can take a 90-minute tour on the tourist trolley which gives a somewhat rough ride compared to the smooth ride of cars today. It has just four stops and the tour guide gives the ins and out of the historical town and points of interest.

Mallory Square is a popular area in the heart of Key West. It comes alive at night and is a hive of activity. Visitors can be entertained by the jugglers, acrobats, musicians and even unicyclists who bring a carnival atmosphere to the coastal town. There are also numerous vendors with homemade handicraft and paintings for the art lovers. 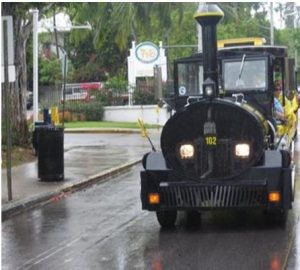 The main shopping, bar and restaurant area is on Duval Street. It is runs for about a mile and a quarter in length, north to south and has an old time charm to it enhanced by the old wooden colonial shops. Look for Walgreens, as it is housed in what used to be the Strand Movie Theatre, fortunately a lot of the architectural design are incorporated in the modern day shop including the figurines at the front. Duval Street has everything on offer from a variety of Cuban cigars, to tropical swimwear and even coral and shells. At night time it comes alive!

The Oldest House in Key West

The address is 322 Duval Street where the oldest house in Key West sits. It dates back to 1829 and was owned by Confederate blockade-runner Francis B. Watlington. Visitors can roam through the house and gardens free of charge during opening hours where antique furniture, portraits and other period pieces give a glimpse into the nautical past. Be sure and visit the cook house located in the serene garden. It is now the location of the Wreckers Museum. 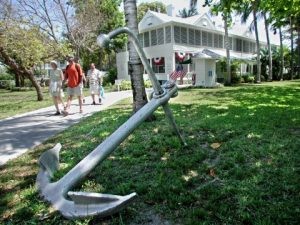 The Ernest Hemmingway House and Museum

World famous writer Ernest Hemmingway lived and wrote in Key West having bought a Spanish Colonial house at 980 Whitehead Street in 1931. He was here that created some of his more memorable characters. It is also here that his love for cats began, be it six-toed cats lovingly referred to as Gypsy Cats many moons ago. Today, the house and its grounds are open to the public for an admission price. You can get to see the well preserved interior where mementos from the author remain on display.

Located at 111 Front Street and originally built in 1890, this was once the home of Harry S Truman. He used it as his winter retreat in 1946. Nowadays, visitors can take a guided tour around the premises and view the original rooms complete with décor and furniture.

For the fearsome tourist Key West boasts of being the most haunted town in the US. It even gives statistics of the dead outnumbering the living 4 to 1. It comes complete with a book full of ‘real’ ghost stories and several paranormal encounters. You can even join a ghost tour and experience the spirit of a young Bahamian girl who plays in the fire engine room at night or listen for the sound of clinking marbles on the staircase in the oldest house in Key West or to see the ghost of thee Ernest Hemingway pacing the veranda on the second story of his house.

The drive to Key West is as rewarding as being in the town. It is known as one of the best scenic drives in the US. It features the elevated Florida Keys Overseas Highway recently dubbed an “All-American” road which is flanked by the blue azure sea on both sides – yes both sides!

Nadia Ali is a freelance writer born in London, UK and now lives in the Caribbean. Her work has been published both online and in print.

Share your thoughts on “The Fabled Colonial Key West”