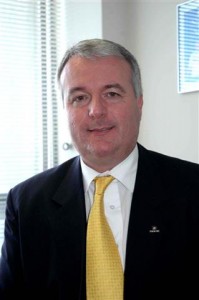 Mr. Bottini began a remarkable twenty-seven year career with VARIG Brazilian Airlines in 1979 working in back-office support and ultimately rising to the level of President and Chief Executive Officer. As CEO, he led VARIG Brazilian Airlines through reorganization to be recognized as the Best Airline by industry peers by successfully restructuring it after it was sold in a public auction. During nine months of intense and brutal negotiations, involving government, creditors, unions, employees, and others, a unanimous decision on the complex Recovery Plan was reached, avoiding the failure of the largest and best known airline in Brazil.

With a Bachelor in Business Administration degree from University Tabajara in Sao Paulo, Brazil, his extensive leadership has earned him high recognition for his professional accomplishments and achievements. These qualities together with his fluency in English, Spanish and Portuguese have earned him various officer positions in several civic and philanthropic associations.

A recognized talent in managing large staffs in multiple locations throughout the US and internationally, Mr. Bottini is a highly motivated, results-oriented leader with extensive experience at the senior operational and business development leadership level. His proven track record in operational profitability, business development, continuous quality improvement and personnel management, combined with his proven expertise in developing and implementing creative marketing and strategic sales programs and his outstanding ability to identify and transform underperforming assets to enhance business operations and overall profitability have earned him high esteem over his career in the travel industry.

Travel Research Online (TRO): What inspired you to pursue a career in the travel industry?

Marcelo Bottini (MB): It was my first job. At age 18, I started working in VARIG Brazilian Airlines and from this moment I was fascinated with the aviation industry.

TRO: Tell us about your day-to-day role at Aerolíneas Argentinas.

MB: My job consists basically of promoting and selling Aerolíneas Argentinas and the destination, Argentina. I have the privilege of working with a team of dedicated professionals, which makes my job easier.

TRO: You have an impressive history of reducing cost expenditures and restructuring companies to make them more efficient. What changes have you implemented since signing on with Aerolíneas Argentinas?

MB: Since I started working in Aerolíneas Argentinas, many things have changed. We have had to become more efficient. We had 3 flights per week to the United States, and we now have thirty flights per week.

TRO: Aerolíneas Argentinas is currently undergoing a rather ambitious fleet renewal program. Can you tell us more about that?

MB: Aerolíneas Argentinas has completely renovated its fleet. We currently operate Airbus A340-300 and A330-200 planes for long-haul flights and Boeing B737-800, B737-700 NG and Embraer E190 planes for all others flights. The average fleet age is 8 years.

TRO: Can you tell us about Aerolíneas Argentinas’ current routes and any recent improvements?

MB: Aerolíneas Argentinas is the national airline of the Argentine Republic and one of the leading airlines in Latin America. It serves 37 domestic destinations, 24 international destinations in 15 countries and transports around 10 million passengers annually. It is the airline that serves more destinations in the Mercosur Market and is the third largest carrier in South America. It provides dynamic links between Argentina and the region via its hub at Aeroparque, Jorge Newbery Airport. This year we increased our domestic flights 8.6%, our regional flights 15%, and our international flights 5%.

TRO: In November of last year Aerolíneas Argentinas and Delta Air Lines reached an agreement on code-sharing. How significant was this move for the airline, and how has this move impacted Aerolíneas this past year?

MB: Thanks to the new codeshare agreement, passengers can now travel to/from 14 airports in 13 cities in the United States on flights marketed by Aerolíneas Argentinas. The cities include some of the most important business center and tourist destinations. The agreement benefits passengers coming to the United States more than those originating here. From the United States we are competing with the three largest American carriers, which all have nonstop flights to Buenos Aires. Delta codeshares on all our nonstop flights between Buenos Aires and Miami and also New York.

The fact that we can now market flights to/from many more cities in the United States has given us more local name recognition than we have ever had before. Also, being associated with a prestigious carrier like Delta has made more people willing to fly with us.

MB: There are many destinations, but if I have to choose it would be Italy.

TRO: What is on the horizon in the coming year for Aerolíneas Argentinas?

MB:  Since the State took it over, in recent years the company has managed to reverse a situation of terminal crisis into an extended period of strong growth, with a very favorable outlook.

For more information on Marcelo and Aerolíneas Argentinas, visit them online at www.aerolineas.com.ar.