See Australia’s Best-Kept Secret, Fraser Island, with Down Under Answers

Posted on October 18th, 2016 by Elizabeth Cody in Outposts

Fraser Island received its name from Captain James Fraser and his wife Eliza, who were shipwrecked off the western coast of the island in 1836. Shortly after their arrival, James died and Eliza was left to live with the native Butchella people until she was rescued by a convict, John Graham.

The island was previously named K’gari by the Butchella people, which translates to “paradise”, due to the sparkling, deep blue freshwater lakes, creeks and sandy white beaches. Fraser Island is a marvel, as it is one of the only places where a rainforest can grow in the sand.

Created by sand drifting from the coast of Australia over thousands of years, Fraser Island is heritage-listed and is considered to be the largest sand island in the world. 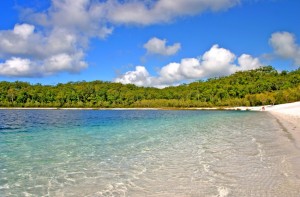 An abundance of wildlife if prevalent and varied. One of the island’s most famous residents is the dingo, reported to be some of the last remaining pure dingoes in Eastern Australia. There are over 300 species of birds, including pelicans, kookaburras, cockatoos, and Australia’s rarest bird, the eastern ground parrot. Possums, echidnas, flying foxes and wallabies roam the island.

The island is surround by marine life. Humpback whales and some species of dolphin frequent the area. Sea turtles, tiger sharks and dugongs can be found in the water throughout the year.

An unusually clear and sparkling body of water, Lake McKenzie is so pure that it is actually unsuitable for many species of animals to inhabit. The water is fed only by rainwater, not groundwater or streams, and the layer of organic material at the bottom of the lake keeps the water from seeping out. The sand of the lake shores is comprise entirely of white silica, which makes it soft and plush to walk on in bare feet. The lake is 370 acres in area, at 3,900 feet long and 3,000 feet wide. 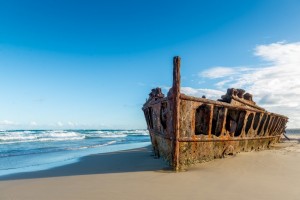 One of the highlights of the island are the soaring cliffs of the Pinnacles. These multi-colored cliffs have developed over hundreds of thousands of years as sand mixed with other minerals and became exposed to the sun. Colors ranging from bright white to lemony yellow to a deep dusty red are striped across these rock formations. The Butchulla people believe that the rocks tell the story of the love between a woman and the Rainbow Serpent, who sacrificed himself near the rocks to save her from her violent fiancé, and view these natural formations as a place of good luck and prosperity for women.

Just as its name suggests, Seventy-Five Mile Beach is a continuous seventy-five miles of uninterrupted beach on Fraser Island. This beach holds some of the island’s favorite swimming spots, including the Champagne Pools and Indian Head, a formation of volcanic rock. Due to the large shark population and aircraft that use the beach as a landing strip, it is not ideal for swimming, but perfect for exploring in an ATV or 4×4.

The shipwreck of the SS Maheno is a major landmark on Fraser Island near Eli Creek. Originally build as a luxury passenger ship traversing the trans-Tasman, she then served as a hospital ship during WWI before returning to commercial operations again. The SS Maheno was taken out of service in 1935 and sold to a ship-breaker in Japan who was towing her to Osaka when she was caught in a strong cyclone. It was found washed up on Fraser Island three days later. Today, 3.5 stories are buried under sand and the exposed structure is severely rusted.

For more information on Fraser Island and Down Under Answers, visit them online at www.duatravel.com.

Share your thoughts on “See Australia’s Best-Kept Secret, Fraser Island, with Down Under Answers”