Posted on November 8th, 2016 by Richard Earls in Departures

It’s October 20th, and I find myself in Dearborn, Michigan. It has been a long time since I was last in Dearborn. I’m wearing a tuxedo; it has been a longer time since I last wore a tuxedo. I’m here at the amazing Henry Ford Museum to celebrate Sky Bird Travel’s 40th year in the travel industry in 2016. The company has sponsored a gala, a black tie dinner to appreciate its friends and customers, and the evening is nothing if not spectacular. Surrounded by authentic aircraft of decades ago in the museum’s “Heroes of the Sky” aviation section, an Indian ensemble plays on traditional instruments. Everyone is mixing and, while it is apparent many know each other from years of business past, striking up a conversation in this setting is easily done as everyone admires the antiques surrounding us.

Arvin Shah, Owner and President of Sky Bird Travel & Tours, came to the USA in 1969 on a student visa.  He graduated from Wayne State University in Detroit with a Bachelor’s Degree in Electrical Engineering and a Master’s Degree in Computer Science. After working in a Detroit travel agency for a while, Arvin started Sky Bird Travel in 1976. Sky Bird’s first office was a small space in downtown Detroit.  Since then, Sky Bird has grown to become one of the largest national airline consolidators in the USA.  Along with their headquarters in Detroit, Sky Bird has branch offices located in Atlanta, Chicago, Fort Lauderdale, Houston, Los Angeles, New York, San Francisco, and Washington, DC, with international offices in Toronto and Mumbai. 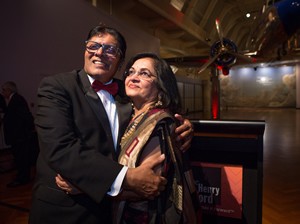 Arvin Shah and his wife Jaya

Arvin’s family includes his wife Jaya and his two children Akshay and Priya.  Akshay and his wife Shweta work at Sky Bird headquarters. Priya’s husband, Rupesh, is the Manager for the San Francisco office. Charity work has always been a priority in the Shah’s life.  Sky Bird’s donations include $25,000 to Red Cross for the Hurricane Sandy Relief Fund in 2012, the Pakistan Earthquake Victims Fund, and the Philippines Typhoon Relief Fund. Arvin and his wife established the Jaya Rehabilitation Center in India in 2005 as a means to provide prosthetic treatment to victims of the 2001 Earthquake in Kutch.  This center is now celebrating its 10th year and has won a National Government Award for Best Rehabilitation Center in India.  The Jaya Rehab Center is 100% funded by Mr. Shah and his family.

I was struck by the profound way the importance of family and friends was evident during the dinner. Three speakers who have known Sky Bird’s principals for many years spoke of their personal relationship with the business and its first family. Andy Bhatia, a veteran of 35 years with Air India, spoke of his earliest days in the United States with Arvin Shah. Businessman Kanti Gala, who arrived in the United States in the 1970’s to pursue his Masters and Ph.D degree, became an entrepreneur and today owns a successful business that spans the globe. United Airline’s Dave Hilfman spoke of his longtime relationship with Sky Bird in the warmest of tones.

The Henry Ford Museum’s motto of “American Ideas and Innovation” was the center of an evening celebrating the amazing diversity of the people who personify the American dream. Please join TRO and me personally in congratulating Sky Bird and it’s employees on 40 years in business.