Find Yourself in Spellbinding Northern Zimbabwe with Emirates | TravelResearchOnline

Find Yourself in Spellbinding Northern Zimbabwe with Emirates

Posted on November 1st, 2016 by Elizabeth Cody in Outposts

Northern Zimbabwe is a land filled with the most beautiful African scenery and the most fascinating local wildlife. From roaring falls framed by a rainbow to houseboats lazing along the lake surface, there is something for everyone who escaped their daily routine to find a slice of paradise relatively untouched by the modern and noisy. In any of the region’s national parks or natural landmarks, you’ll have the opportunity to meet some of Africa’s most iconic creatures, from antelope to zebras and everything in between. 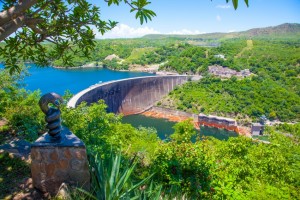 [/media-credit] The dam at Lake Kariba

The Riviera of Zimbabwe, Lake Kariba is a man-made lake spanning an area of over 1900 square miles (5000 kilometers). Visitors to the lake often opt to rent a housboat, where they can relax, enjoy the sun, and catch a few fish at their leisure. Houseboats can be rented at the lake’s namesake town, Kariba. The lake is located close to the Matsudona National Park, which means there are plenty of opportunities to snatch pictures of the local wildlife, including the Big Five: lions, elephants, rhinos, leopards, and buffalo. While you can relax on the lake, swimming is prohibited because of the presence of crocodiles.

Zimbabwe’s capital city of Harare is a perfect melding of industrialization melding neatly with the country’s stunning landscape. The city has seen some recent resurgence thanks to the government’s decision to adopt the US Dollar as their official currency. Harare is a city full of hidden gems, including trendy bars, delicious restaurants, intriguing museums, and bustling markets. The city is a popular stopping point for safari enthusiasts to take a breather from the sweltering heat of the savannah and indulge in some of the more human of creature comforts. 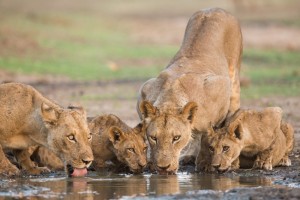 The UNESCO World Heritage site of Mana Pools National Park contains over 800 square miles (2000 square kilometers) of untouched African landscapes and wildlife. Besides some of the Big Five, the park also contains hippos, painted dogs, zebras, and crocodiles, just to name a few. The park has no fences, allowing for more up-close encounters but also creating the necessity for staying close to a guide. The park is popular for its rugged terrain and more natural setting, without too many amenities for humans. There are, however, lodges and campsites for any animal enthusiast who wish to stay in the park for the opportunity to get close to more of Africa’s greatest creatures.

84 miles northwest of the capital city of Harare, the Chinhoyi Caves consist of limestone and dolomite. The caves all have their own names, such as the Blind Cave, Bat Cave, and Dark Cave, and eventually descend into a large cavern with a stunning cerulean blue pool. The pool, also known as the Sleeping Pool, stays at the perfect temperature for diving year-round, a balmy 72 to 75°F (22 to 24°C). The pool is popular for experienced deep water divers, with some dives reaching as far as 330 feet (100 meters) into the depths of the pool. Visitors can opt to stay at the local campsite near the caves. 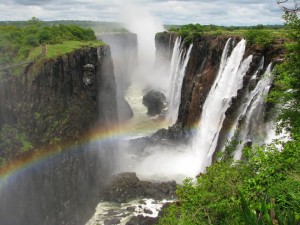 The breathtaking and enrapturing Victoria Falls are a must for anyone visiting Northern Zimbabwe. These majestic falls were discovered by David Lingstone, a British explorer, in the mid 19th century and named in honor of his queen, Victoria of Britain. Victoria Falls is considered to be the largest in the world, at over 5600 feet (1708 meters) wide and 350 feet (108 meters) tall, creating the world’s tallest falling sheet of water. The water cascades into six different gorges, and many visitors opt to defy fate by swimming in the naturally created “Devil’s Pool” during the season, when rocks create a natural barrier that helps keep swimmers from falling over the edge of the falls.

For more information on Emirates Airlines, visit them online at www.emirates.com.