How to Deliver a TED Talk: Make Your Message Sticky | TravelResearchOnline

How to Deliver a TED Talk: Make Your Message Sticky

Posted on November 10th, 2016 by Mike Marchev in Reading Between the Lines

“I have a strong preference for three’s since that is the stickiest number.”

How to Deliver a TED Talk by Jeremey Donovan, page 39

I like the word “sticky.” It was first brought to my attention in the book written by the Heath Brothers titled “Made To Stick.” The idea is that many marketing messages come and go while getting lost in the clutter of today’s bombardment of “me too… only better.”

The challenge to today’s marketers (and that defines just about every man, woman, and child on the planet) is to capture the attention of a defined audience, deliver a message of value, and have it remembered for more than five milliseconds. In other words, we want our messages to “stick” around. 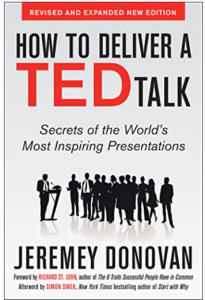 I am about to misquote the next number, but it has been said that in 2016 we are introduced to more information in a single edition of The New York Times than we were in a lifetime back in the late 1880’s.

This translates to the fact that we are being introduced to a whole bunch of information, and in order to maintain some semblance of sanity, we only pay attention to what interests us at the time. Therefore, we must make it easy for readers and listeners to read our stuff and listen to our recommendations.

Enter the magical number three (3). Three by the very nature of things can be considered a very sticky number. The reason for this is because it has become a working member of our DNA.

Three Strikes and You’re Out

The Nina, The Pinta, and The Santa Maria

You get the idea. Three is a number we can all get our heads around.

So, the next time you want to paint a picture of a destination or steps to take when giving directions, try “sticking” to the number three. It will work in your favor as your instructions will be internalized more easily.

“I strongly recommend that you consider taking a European River Cruise on AmaWaterways for three reasons:

Share your thoughts on “How to Deliver a TED Talk: Make Your Message Sticky”