Journey to the Center of European Culture in Brussels with TUIfly

Posted on November 8th, 2016 by Elizabeth Cody in Outposts

Brussels is a quietly alluring city, drawing visitors in with her quirks and charms as much as for her aesthetics. Just over 1,500 years old, the city has weathered through battles for settlement, independence, and two World Wars, all while still managing to retain much of its original history, architecture, and pride. The people of Brussels delight in celebrating both the old and not-so-old in their city, as well as embracing the idea of a core European identity. It’s no wonder that after the formation of the European Union, they chose Brussels out of every European city to call home. 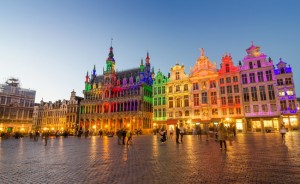 [/media-credit] The Grand Palace in Brussels

The area we know today as Brussels was settled in the latter half of the 6th century, initiated with the construction of a chapel along the Senne river. The city was officially founded in the late 10th century by Duke Charles of Lower Lotharingia when he moved sacred religious relics to the church. Once the walls of the city were erected in the 13th century, the population quickly prospered, creating the need for a second set of walls close to the beginning in the following century. Brussels survived both World Wars with little damage, and in the 20th century saw the city bestowed with the honor of being the capital of the newly-formed European Union. This resulted in movements by the city to revitalize itself with new buildings and construction, creating the charming blend of medieval and modern architecture visitors see in the city today. Brussels is a fairly humid yet temperate area, with temperatures in the moderate range but made to feel warmer thanks to the moisture in the atmosphere.

One of the central and most iconic sights in the city, the Grand Palace is a must-see for any visitor making their way to Brussels. This city square was originally built as a marketplace during the founding of Brussels in the 10th century and is today one of the most popular meeting places in the city. Every other year in August, a “flower carpet” display is arranged in the square, measuring out to over 19,000 square feet (18,000 square meters), comprised of over one million vibrant begonias. The tradition begin in 1971 when landscape architect E. Stautemans created the first carpet, coordinated to occur during the Christian festival of The Assumption. In 1998, the Palace was named as a UNESCO World Heritage Site and voted the most beautiful square in the world in 2010 by survey. 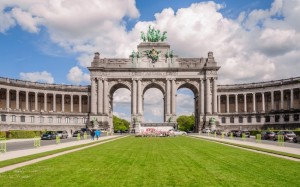 A department store from the late 19th century, the Old England Building is a stunning example of the art-nouveau architectural style just coming into prominence at the time. The building is striking and stands out no matter where you are in Brussels, with its ebony exterior and wrought iron attributes. The Old England Building, while no longer serving the city in merchandise sales, has been converted to one of the world’s foremost music museums, complete with a collection of over 2,000 instruments on display. The instruments range from the traditional Belgian to Chinese and other cultural instruments. Visitors are given special headphones when entering the museum in order to listen to audio excerpts of each display and instrument.

The focal point of the Cinquantenaire Park (which translates to “Park of the Fiftieth Anniversary”), the Arc de Triomphe provides one of the most comprehensive and eye-opening panoramic views of the city. Built in 1880 by King Leopold II, this entire square was constructed to celebrate fifty years of Belgian independence from the Netherlands. The arc and the plans for renovating this once military training ground into a gorgeous public square came from the mind of Gideon Bordiau, who spent 20 years on the project before his death in 1904. Renowned French architect Charles Girault would become his successor and the monument and square would be completed in 1905, the 75th anniversary of Belgian independence. Visitors can make their way to the top of the Arc and take pictures or just gaze out at the glistening Beligan scenery for as long as their heart desires.

For more information on Brussels and TUIfly, visit them online at http://www.airlinepros.com/portfolio/jetairfly.