Stroll Through the Legacy of Accra with South African Airways | TravelResearchOnline

Stroll Through the Legacy of Accra with South African Airways

Posted on November 15th, 2016 by Elizabeth Cody in Outposts

Accra has a fascinating and uplifting background, both past and present: fought over by European powers for centuries before achieving its independence in the mid 20th century, today the city is flourishing with stunning monuments as a testament to its victories and triumphs. From exploring the last dregs of European colonialism to walking the legacy of first president of Ghana, the city has a calm certainty about who and what it was and wants to be in the future that is rare in many destinations. 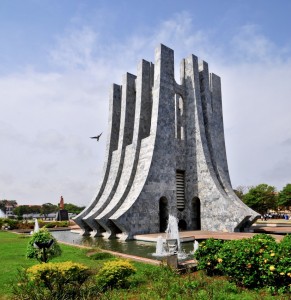 Accra began its growth as a major trading post thanks to Dutch settlement in the area, followed by the British and the Swedes. The kingdoms of France, Portugal, and Denmark would also make their mark by the end of the 17th century in the African city, but eventually Great Britain would buy out the interests of the other European countries and dominate the city and the region. England utilized Accra as Ghana’s premier port at the time, and new British settlers enforced segregation while refusing to put money into rebuilding the city. After World War II, the city and country of Ghana slowly built itself into a modern and independent country, creating new stunning pieces of architecture that told a story all its own that was neither wholly European colonial nor native African. Today the city is pulsing and thriving with museums, public squares, and remnants of the old European rule, even as the fairly new government continues to carve out a name for itself in the international community.

Ghana tends to have steady temperatures year-round, with little to no variation throughout the year. Temperatures can range from 79°F to 86°F (26°C to 20°C), and the climate falls within the tropical savanna category, making the summers dry and the winters more humid. The city is particularly vulnerable to the effects of climate change, specifically as sea levels continue to rise.

One of the first landmarks any visitor should see when visiting Accra is the Kwame Nkrumah Memorial Park, created in honor of Ghana’s first president and the man who led them to independence against England. Nkrumah worked his way into government with little experience, but brought the entire country of Ghana out of the colonial age and into independence with his ingenuity and calls for bolstering their national spirit. A mausoleum housing his remains is located on the grounds, as well as a monument and museum in his honor. Visiting dignitaries have planted many of the trees in the park to pay their respects to this great Ghanaian leader. 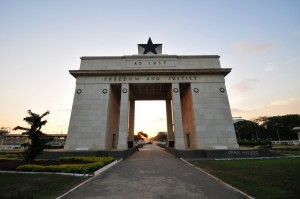 During Nkrumah’s tenure as President of Ghana, he commissioned the construction of Independence Square, a public square featuring a large stone arch topped with a black star, all in honor of a visit from Queen Elizabeth II. One of the monuments holds the Eternal Flame, lit by Nkrumah himself at the park’s opening in 1961, and which still burns today. A statue of a Ghanaian soldier faces the Independence Arch, a poignant reminder of all those warriors who lost their lives for their nation’s independence and freedom. Most of Accra’s major celebrations, festivals, and events are held in this square, including the country’s Independence Day on March 6th every year. On March 6 of 2017, Ghana will celebrate its 60th year of independence.

Along the coastline of the city of Accra is one of its most famous landmarks, the Jamestown Lighthouse. This lighthouse is part of the remnants of the European forts of James and Ussher from the 17th century, which is now mostly occupied by the city’s native inhabitants, the Ga people. The original lighthouse built by the British was replaced by the local government in the 1930s and can be seen from 16 nautical miles away. Visitors can climb to the top of the lighthouse to get a fantastic panoramic view of the city, weather permitting of course.

South African Airways (SAA), the continent’s most awarded airline, offers nonstop flights four times weekly from Washington Dulles to Accra, Ghana with continuing service to Johannesburg, South Africa.  SAA also offers daily nonstop service from New York-JFK to Johannesburg and Washington Dulles to Dakar, Senegal. Through its code share and interline partnerships with United Airlines, Air Canada, JetBlue Airways, American Airlines and Virgin America convenient connections are offered between over 100 cities in the U.S. and Canada and SAA gateways in New York and Washington, DC. Through its Johannesburg hub, SAA and its regional airline partners South African Express, Airlink and Mango connect travelers to over 75 destinations throughout the African continent. A Star Alliance member, South African Airways is the recipient of the Skytrax 4-Star rating for 14 consecutive years.

For more information on South African Airways, visit them online at https://www.flysaa.com.