Travel To Balmy and Breezy Chios with CTS Fares | TravelResearchOnline

Travel To Balmy and Breezy Chios with CTS Fares

Posted on November 22nd, 2016 by Elizabeth Cody in Outposts

Chios is a Mediterranean hotspot just waiting to take off: beautiful turquoise waters, blazing sunsets, and fascinating history and culture. As the fifth-largest of the Greek islands, it often doesn’t get much love from visitors running to the bigger and shinier islands, but those looking for hidden getaways and the quieter oasis, know exactly where to go: Chios. 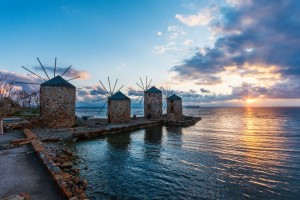 [/media-credit] The sun setting over Chios.

Archeologists have found evidence to support their belief that Chios was inhabited as early as the Neolithic period, between 8000 and 6000 BCE. The Leleges people, aboriginal Greeks, inhabited the island before being driven out by the Ionians and was one of the original members of the Ionian League. Chios became part of the city-state of Athens but revolted many times, succeeding in gaining its independence until the rise of Macedonia and Alexander the Great. The island was coveted for its particular quality of wine, and would become one of the largest winemakers in Classical Greece. After Greece lost its hold on the island, it would succumb to the rule of the Romans, the Byzantines, the Genoese, and the Ottoman Turks until finally gaining its independence in the 19th century.

The climate of Chios is warm and mild, typical for a Mediterranean island and in part thanks to the surrounding sea waters. While temperatures can see the extremes on some occasions, they tend to flirt with highs of 80°F (20°C) during the summer months and lows of 52°F (11°C) in the winter time. The island is particularly breezy, good news for anyone looking to take up kitesurfing or sailing during their time there. 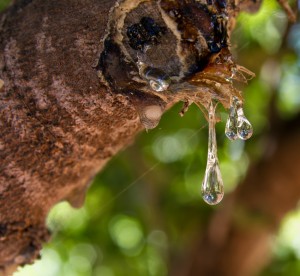 [/media-credit] The sap dripping from a mastic tree, one of the premier exports in Chios.

One of the island’s greatest exports is the sap of the mastic tree. This substance known as mastic and is often turned into a resin known as Arabic gum. When chewed, the clear resin turns opaque and gives off a refreshing pine or cedar-like flavor. Ancient healers touted the resin as a remedy for snakebites, digestive issues, purifying the blood, bronchitis, and colds. Modern doctors agree that mastic does contain antioxidants and antifungal properties, although not all agree on the potency. Mastic is also a recipe in many Middle Eastern and Japanese recipes, from desserts to jams to breads.

A medieval castle constructed to protect the citizens of Chios from naval attacks, the Castle of Chios was first conceived by the Byzantines in power in the 10th century. The majority of what visitors see today was construction completed by the Genoese government between the 14th and 16th centuries during their time of rule. One of the highlights of the castle besides the fortress is Saint George’s church, a Byzantine chapel later converted into a Genoese basilica, and part of it later converted into a mosque after the island’s capture by the Ottoman empire. Another must-see sight is the Turkish baths, with vaulted roofs and huge underground reservoirs for the water. 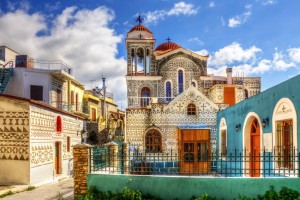 [/media-credit] The stunning village of Pyrgi.

Honored with the title of UNESCO World Heritage Site, Nea Moni is a former monastery on the island of Chios with a fantastic collection of mosaics inside its doors. Legend holds Emperor Constantine built the monastery after three monks on the island told him of their vision of his eventual reign as king. The monastery is dedicated to Theotokos, or Mary in English, as that is who the monks saw in their vision. Right next to the monastery is the Byzantine Museum, one of the most prestigious in the country. Visitors should try to visit Chios at the end of August; on the 23rd every year the monastery holds a huge festival celebrating the history of the structure.

For more information on Chios and CTS Fares, visit them online at www.ctsfares.com.