Posted on December 13th, 2016 by Elizabeth Cody in Outposts

Chennai was once the heart of British colonialism during its heyday. Today, however, it is a delightful mosh-posh of local architecture, artifacts, and culture, seasoned only slightly with the remnants of colonial rule. This city has so much to offer visitors, from those looking to explore the history of world trading routes to stunning mosques and temples, all the way to amazing golden beaches lapped by turquoise waters. Make your way to Chennai, before this little-known secret gets out! 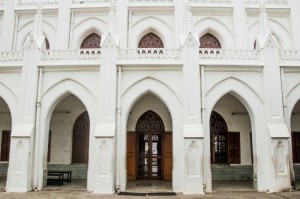 [/media-credit] The Basilica of St Thomas

The Basilica of St Thomas is one of only three known burial sites for one of the apostles of the Christian Messiah, Jesus, and here in Chennai is buried “doubting Thomas”. The basilica is home to an important religious art piece, a painting of the Holy Mother, which many pilgrims journey to Chennai every year to worship. In 2004 the cathedral was restored and renovated, with an outside access into the church and a cinema playing a film on the life of St Thomas himself.

Considered to be one of the oldest temples in the city, the Kapaleeshwarar Temple’s history is hazy, with initial construction dates placed anywhere between the 7th and 17th centuries. Named after the Hindu god Lord Shiva, the temple welcomes visitors with a gate over 120 feet in height, and inside are flower shops and a water tank used for certain festivals. During the larger festivals, the temple is decorated in elaborate colors and decor in celebration, and is a sight that cannot be missed.

Also known to the locals as White Town, Fort St George was constructed by the East India Trading Company in the mid-16th century. This stronghold was one of the first major centers of British influence in India, and has seen many changes to its exterior over the centuries. Today the facility serves houses government assemblies and is a living museum of colonial and military artifacts.

The Valluvar Kottam is a memorial to one of the city’s most memorable poets and philosophers, Tiruvalluvar. His memorial is shaped like a chariot used in temples and contains a life-size statue of Tiruvalluvar himself under its canopy. Opened in 1976 to the public, the memorial is an auditorium where visitors will find all 1,330 verses of Turvalluvar’s masterpiece, Thirukkural, engraved on the thousands of stones. 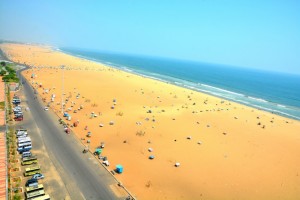 Constructed in 1795, the Wallajah Mosque is a tribute to Nawab Muhammad Ali Walajah, the Nawab of the Carnatic dynasty and loyal to the British. The mosque is a magnificent architectural endeavor, built using only stone and wood, and is one of the most sacred mosques in Chennai. Within the mosque are many tombs of Indian nobility and Muslim scholars and philosophers, some over two hundred years old.

Once you’re ready to get away from the city, head over to the long stretches of golden sand at Marina Beach. The second longest urban beach on the planet, Marina is a favorite hangout spot for locals and visitors alike, although evenings and weekends can get fairly crowded. Join in a cricket match, fly a kit, or dig into some sundal (spicy boiled lentils) while you’re enjoying the sun and surf.

For more information on GTT Global, visit them online at www.gttglobal.com.