Discover the Magic of the Solomon Islands with Solomon Airlines | TravelResearchOnline

Discover the Magic of the Solomon Islands with Solomon Airlines

Posted on March 21st, 2017 by Jennifer Garber in Outposts

The magical Solomon Islands are an archipelago of almost 1,000 islands in the South Pacific between Papua New Guinea and Vanuatu, a three-hour journey from Australia. This virtually untouched archipelago is a beautiful and exotic destination, rich in cultural heritage, biodiversity and spectacular landscapes. Relatively untouched, the Solomon Islands offer travelers a magical vacation that looks and feels out-of-this-world. 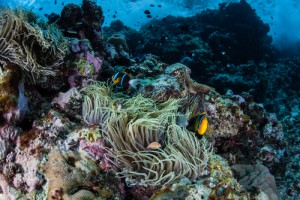 A reef in the Solomon Islands

The Islands’ feature several dormant and active volcanoes, as well as rainforests with over 230 varieties of orchids and tropical flowers coloring the landscape. The year-round average temperature of 79.7 degrees Fahrenheit also makes the Solomons an attractive destination for holiday travel any time of year. While there is not much distinction between the seasons, travelers can expect cooler weather June through August, with heavier rainfall November through April.

Travelers to the Solomons are swept away by the rich cultural heritage and hospitality of the local people. The local population is primarily Melanesian with smaller Polynesian, Micronesian, Chinese and European populations. The Solomons have been inhabited for thousands of years. As a result, age-old customs have been handed down over generations, many of which still endure today.

While the majority of the Islands’ population live in rural villages, the Islands’ capital city of Honiara is a place where ancient ways intermingle with modern technology. Traditional music and dance is very much alive in Honiara—where drums made of bamboo are more common than seashells. Located on the Island of Guadalcanal, Honiara is also home to several museums, restaurants, hotels, markets, and an international airport. Honiara’s hotels are excellent locations to spend an evening immersed in a local music and dance. 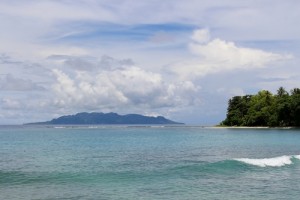 Savo Island seen from the beach

Travelers will want to spend at least one day on the island of Savo to uncover a paradise of hot springs, volcanic sands, trickling creeks and fertile forests. An island with nearly 6,000 people and maybe a dozen cars, Savo is the perfect destination for travelers seeking to leave the world behind them; Savo is the island that time forgot. Easily reached by boat from Honiara, Savo has a majestic beauty. This volcanic island rising from the ocean, where dolphins play just off the coast, is ideal for land or water activities. Many travelers spend the warm days snorkeling with dolphins and iridescent fish, or hiking to the top of a volcano cloaked in gorgeous forest. Evenings on Savo provide the refreshing opportunity to relax on the beach, feet in the volcanic sand, savoring a mouthwatering tuna steak.

A must-visit destination site for those with a penchant for history, the Solomons are host to hundreds of ships and aircraft strewn across the sea bed. A reminder of World War II, these underwater sites also provide fantastic diving opportunities. Travelers interested in history but who prefer to stay above the water-line can enjoy touring Honiara’s U.S. War Memorial honoring fallen Allied soldiers. Down the road from the Memorial is The Solomons Peace Memorial Park, built by Japanese war veterans in memory of those killed in World War II.

With almost a thousand islands, the Solomons offer breathtaking scenery and unforgettable destination experiences year round.

Start your Solomon Islands adventure with Solomon Airlines and let us fly you to an unspoiled, magical paradise.

Solomon Airlines is the national carrier and flies to Honiara from Brisbane four times per week, from Sydney once a week, and provides weekly flights from Nadi, Port Vila and Port Moresby. From North America, most travelers fly via Los Angeles and either Brisbane or Nadi.

For more information on Solomon Airlines, visit them online at flysolomons.com.