Posted on April 21st, 2017 by Jane Behrend in Soundings

Gudmundur Kjartansson, a native Icelander, is the co-owner of Iceland ProCruises and Iceland ProTravel companies. With over 23 years of experience in Iceland tourism and selling trips to Iceland abroad, the cruise line is beginning their third year of operation specifically focused on Iceland as the destination.

Travel Research Online: You’ve been in the Icelandic travel industry for 23 years. What inspired you to start Iceland ProCruises?
Gudmundur Kjartansson: I always wanted to combine the ocean with tourism here in Iceland. We started a couple of years ago leading sea angling and deep-sea fishing tours with Iceland ProFishing, so developing the idea for Iceland ProCruises was the second step to exploring Iceland.

TRO: What kind of experience can tourists expect to have with Iceland ProCruises?
GK: The main focus is Iceland. We are featuring a 4-star vessel sailing in the Arctic region with an excellent crew onboard qualified as a pure, Icelandic expedition team. Our goal is to bring tourists the “Iceland degree of experience” by offering an expedition team knowledgeable and specialized in all things Iceland and Greenland, as well as traditional Icelandic food being served onboard. We have put a great emphasis on the idea that people will not only get to experience Iceland from the sea, but onshore, as well, with our variety of excursions.

TRO: Iceland ProCruises will be in its third season with its 199-passenger vessel, the Ocean Diamond, this year. What are a few cruise itineraries guests can choose from?
GK: Our most popular itinerary is our Iceland Circumnavigation tour, visiting 10 ports around Iceland, including a stop to Grimsey Island on the Arctic Circle .  We also have two Iceland/Greenland cruises, our Natural Wonders of Iceland and Greenland . This trip  takes off from west Iceland toward the south end, and then going along the west coastline of Greenland. This area is the most popular part of Greenland, where tourists will be able to see a variety of settlements, huge glaciers, and diverse wildlife. We also do this trip in reverse – starting in Greenland and heading to Iceland.

TRO: What types of amenities are made available to guests on board?
GK: Our Ocean Diamond ship is a 4-star vessel accommodating 199 guests at the highest standards. The ship features elegantly designed modern amenities and supreme accommodations, including facilities en suite, flat screen TVs and DVD players, chef-prepared meals, bar staffed by a professional bartender, massage and wellness programs, fitness center, sauna, pool on the upper deck, theatre-style auditorium with state-of-the-art AV equipment, and a library with a large collections of polar books and DVDs. The interior also features large-sized cabins, with the smallest being 17 sq. meters, as well as a large enough dining area that allows us to seat everyone for breakfast, lunch, and dinner at the same time.

TRO: What is the one feature/aspect that separates Iceland ProCruises from other cruise lines traveling to the same destinations?
GK: What separates Iceland ProCruises from other cruise lines is it is the first cruise line to only focus on Iceland as the destination. Iceland ProCruises also features a specialized Icelandic expedition team, as well as a Greenland expedition team. Due to the size of the Ocean Diamond cruise vessel we are able to navigate through smaller areas of both Iceland and Greenland, giving passengers a unique experience that differs from the traditional cruise routes. The ship also has 18 Zodiacs onboard that we use for shore excursions. 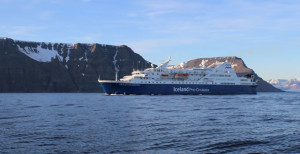 We’ve Still Got Some Space!

Discover your inner Viking this summer with Iceland ProCruises. There’s still some space available aboard the 199-passenger Ocean Diamond on our Iceland Circumnavigation itineraries and our voyages between Iceland and Greenland in the North Atlantic.

In addition to cruises, IPC offers self-drive and other land-based touring options — a chance to explore the island by land and sea in much the same manner as the Norsemen who pioneered Iceland in the 9th century AD.

With Iceland one of the globe’s hottest travel destinations, hotel rooms are in short supply during the summer high season. But not if you travel with IPC, where the Ocean Diamond, serves as your “floating hotel” for discovering the island.

The majority of the available space is in the higher cabins (A, B, D) on the Ocean Diamond. For more information, visit our website or download our digital brochure — Iceland ProCruises 2017

What Else Is Special?

Iceland ProCruises has several special rates and packages for sailings this summer. You can save up to 30% with our current specials. Take a look here.

Share your thoughts on “Interview with Gudmundur Kjartansson of Iceland ProCruises”