So United really stepped in it this time | TravelResearchOnline

So United really stepped in it this time

Posted on April 17th, 2017 by John Frenaye in Editorial Musings

Unless you are living under a rock, you know about the latest airline screw up. United oversold a flight and needed seats for their crew to staff another plane at the destination. The solution United came up with (as all airlines will do) is to bounce a few passengers. Where United differed was that, for some still yet unexplained reason, they decided to forcibly remove one passenger causing injury and embarrassment to both the passenger and the company. We can follow along with the unfolding saga and will ultimately find out what truly happened. But all that aside, there is another valuable lesson to be learned here.

Had this happened twenty year ago, 100 people may have heard about it over a dinner party that evening. But thanks to folks like Jayce Anspach who captured one (of many) videos of the incident, the guest list has increased significantly.

@United overbook #flight3411 and decided to force random passengers off the plane. Here's how they did it: pic.twitter.com/QfefM8X2cW

Toss in the (now deleted) video from Audra Bridges on Facebook that was seen more than 3 million times and you see that a problem is brewing. The first comment on Anspach’s tweet was from Fox News asking permission to use. Just a quick glance at the first page of YouTube, it looks like there are an additional 70 million or so views from various outlets about the story.

All of a sudden, it becomes clear that more than 100% of your paying passengers have been witness to what happened on Flight 3411 on April 9th. In 2015, United flew 95 million passengers according to the US DOT.

Ah yes, the power of social media. You can live by it. Or you can die by it. And United is seemingly dying from a thousand cuts. First their CEO apologized for the inconvenience of “re-accommodating” the passengers. And when he realized the scope, his apology became a bit more sincere. The Internet has gone wild. Here, let me google that for you! The good news is that while the Internet is forever; in a world of 140 characters, constant updates, and disappearing Snapchat images…the public tends to have a very short memory. This incident, from a public perspective, will be yesterday’s news in short order. And they have the market capitalization to handle it. Do you?

United will undoubtedly pay out millions of dollars to Dr. Dao. United’s stock will continue to take a beating for a little bit. People will threaten a boycott until they realize that the way the industry is structured, that it’s impractical—if not impossible.

While I am not suggesting you are dragging someone out of your office; but the screw up does not need to be this severe for it to hurt. And as an agent for suppliers, we do not even need to be responsible to be dragged into something like this. And with social media, a disgruntled traveler’s tale will spread faster than a forest fire in August.

My advice to you (and United) is to get on top of it quickly. Get on top of it with measure. Accept responsibility when you are responsible. Explain why you may not be responsible. Do your best to make it right. Had United’s CEO Oscar Munoz come out and said “oh my that is horrible, we will get right on this” instead of this 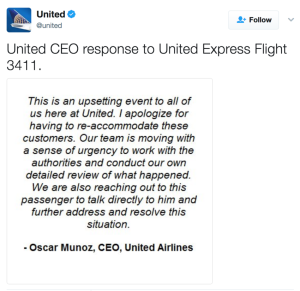 Things may have been very different for United.

Beware–social media is like a train. Once it gets up to speed, it is very difficult to stop quickly. When you sense a problem, make sure you are monitoring on all cylinders and are prepared to answer immediately. They say time waits for no one—well, neither does the Internet.