Posted on May 23rd, 2017 by Simone Hasskew in Outposts

Córdoba, Argentina is the geographical center of Argentina, and the capitol of the Córdoba providence. Known not just for its Spanish and Jesuit history, Córdoba blends old with new through out the city, from building renovations to forward thinking. Córdoba is the main area of urban development in the central region of the country, and even served as the American Capitol of Culture in 2006, a testament to its cultural integration. The Spanish colonial architecture and beautiful views, and the near endless selection of things to see and do are just a few of the reasons Córdoba should not be missed on your Argentinian vacation. Thanks to Aerolíneas Argentinas, you don’t have.

Córdoba can be found nestled in the foothills of the Sierras Chicas, a fluvial valley on the Suquía River. The second most populous city in Argentina, Córdoba was founded in 1573 and by the end of the 19th century urban industrialization brought many educated European immigrants to settle in the city, which led to the construction of new avenues and streets, public squares, and even a tram system that made its debut in 1909. The subsequent urban and market development after this led thousands of families to the city, and from here Córdoba saw so much growth it became the second largest city in Argentina. 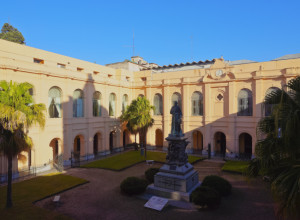 View of the patio of the National University of Cordoba.

There is more to Córdoba than just its prosperous industrial sector, for example the city of Córdoba also happens to be one of the largest educational centers in Argentina. It boasts 6 universities and multiple post secondary colleges. Founded in 1614 The National University of Córdoba is the fourth oldest university in South America, the sixth in Latin America, and the first in Argentina. Not just a center for education but a voice for educational reform, The National University of Córdoba student body was a large part in the Argentine University Reform of 1918 fighting for the democratization of the nation’s academic activities. You can see the original grounds of the university in the Jesuit Block and Estancias of Córdoba. 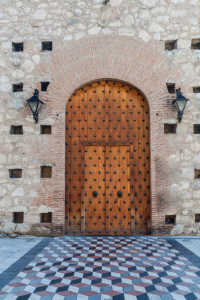 Declared a UNESCO World Heritage Site in 2000, the Jesuit Block and Estancias of Córdoba is located in the center of the city. Constructed as a center for prayer by the Jesuits in 1615, it is now one of the most popular destinations in the city of Córdoba. On your visit explore the Iglesia de la Compania de Jesus, the Jesuit church completed in 1671. Designed by Flemish Padre Philippe Lemaire, one of its more notable features being the baroque alterpiece made from carved Paraguayan cedar from the Misiones province. Make sure not to miss the Capilla Doméstica located behind the church, most famous for its unique ceiling. Made from cowhide stretched over a skeleton of thick taguaro cane and then ornately painted with pigments containing the boiled remains of bones, it is definitely a site to see.

Although not technically on the grounds of the Jesuit Block, the estancias played an important role in the development of the National University of Córdoba. Built to maintain the school and provide the funding for its construction, the estancias were generally concentrated on agriculture and textile production while still also keeping roots in the faith. The closest estancia to the Jesuit Block is Alta Gracia, or “high grace,” which has grown into its own town over time. If you decide to spend some time there, don’t miss the house that revolutionary Che Guevara lived in, now turned into a museum for the public. 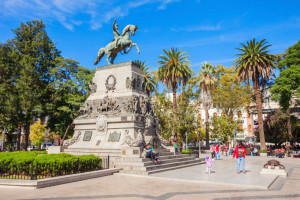 The Plaza San Martín is another sight you shouldn’t miss on your visit to Córdoba. During the colonial era, this was where fairs, celebrations, and even bullfights were held. Many buildings with significant Spanish architectural influences can be found in the square, including The Cabildo de Córdoba. With building beginning in the 17th century, the Cabildo de Córdoba still maintains its original 15 arches as well as its two interior courtyards. In it you will find a museum of the city of Córdoba, which illustrates its history. If you are lucky you might catch an event, as the building is often used for theater and musical performances. The floors and walls of the catacombs and hallways still have their original materials, such as adobe brick. 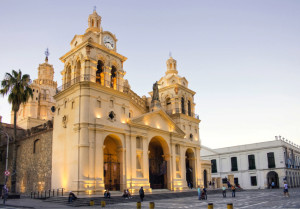 The Cathedral of Córdoba, another architecturally spectacular building, is also located in the plaza and full of artistic grandeur. In 1941 it was declared a National Historic Monument; the cathedral exhibits many different forms of art, including a Spanish baroque style façade and a Neoclassical portico designed by Italian architect Andrea Blanqui, and an extensive silver and gold votive collection. In the early 20th century, it’s interior was decorated with beautiful frescoes and murals.

As the culture in Córdoba is plentiful, so are the nightlife. Studio Theater, an old building turned nightclub, is popular among backpackers and those passing through the area of Córdoba. For more architecture-turned-nightclub spend a night at Villa Agur, which was once a gorgeous English style home, and enjoy  a glass of fernet and look out at a breathtaking view of the city. Try your hand at the dance of tango at El Arrabal, or catch a traditional theatre show at Teatro Real. Make sure to get a taste of Córdoba’s many cuisine offerings, like República: a stylish restaurant serving contemporary takes on Argentinian food. You can choose to order à la carte or see how you fair through their set menu made up of multiple courses of both food and wine.

For something a little less up-scale grab a meal at Macadam, where they serve delicious authentic Italian food and offer low brow ambiance for the traveler trying to relax. If you are looking for something relatively priced but still tasty make sure to stop at Diran, where the owners serve dishes from hummus to tabbouleh. Don’t forget to try their Middle Eastern version of empanadas! 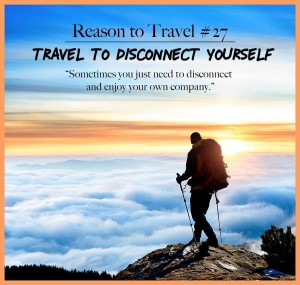 TRO is now placing great content like this in its articles for travel agents to use! Drag this to your desktop and then upload it to your favorite social media!

Share your thoughts on “Explore Culture in Córdoba, Argentina with Aerolíneas Argentinas”