Iceland’s volcanic eruption in 2010 might have caused air travel havoc, but it also started a boom never seen before in Iceland’s tourism. It wasn’t too long ago that Iceland could expect about 350,000 visitors a year – not a bad figure for a country with a population of around 330,000. But in the year following the eruption, tourism began to increase by unprecedented numbers.

Locals explained this new enthusiasm as the result of the dramatic video shot by news agencies and broadcasted throughout the world. People became mesmerized by fireballs, flowing lava and treacherous rivers created by melting glacier ice. By 2014, visitors exceeded 4 million, giving substantial employment to more than 10% of Iceland’s population.  Tourism is now a very big chunk of its GNP.

We started getting numerous requests for Reykjavik shore excursions a couple of years ago. It soon became our second most requested but unfillable port – unfillable because it is our business rule not to put up a port until we have researched it thoroughly, including an extensive visit. With more than 300 cruise stops scheduled in 2017, we made up our mind to bring Iceland into the ShoreTrips line-up. Research began early this year, and our visit there took place in early May. In the two weeks that we were there, we met with guides, pilots, monster-truck drivers, hikers, bikers and other activity providers in our quest to find the best people to conduct our island-wide excursions. 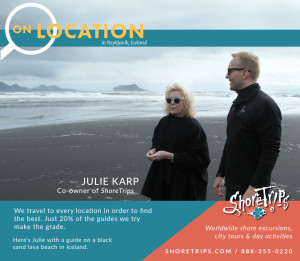 ShoreTrips on location in Iceland

We identified three major ports where we expect the clear majority of travelers to dock – Reykjavik (in the south), Akureyri (in the north) and Isafjordur (in the west). Here is what we found:

Reykjavik – Iceland’s capitol has about 250,000 people. Three districts in the old town area make up the places that foreigners tend to visit: the “101” (its postal code) district is the heart of the old town and draws in most of the tourist and backpackers; Westtown, rising above the “101” has great shopping and scores of restaurants and bars.  Eastown is Reykjavik’s Brooklyn – inexpensive and hip.  It would take anyone about half an hour to walk from the furthest end of Eastown, through the “101” and uphill to the furthest end of Westtown.  Just below and towards the waterfront from Westtown is ShadowTown, a community of high rise apartments and office buildings.

We have already begun to publish our Reykjavik-based excursions. They include a walking tour, a gourmet fishing trip and numerous shared and private tours outside town including the Golden Circle and the South Shore tours. We have contracted with off-road excursion companies to take guests along the black sand beaches and over the volcanic lava flows.  ATV and snowmobiles are used in the most remote locations. Helicopter and fixed-wing sightseeing will give the visitor a birds-eye view of this spectacular landscape. Most popular will be the Blue Lagoon, which we will combine with other tours and even as an experience with a transfer.

We are also able to offer over-night stays at properties that range from an upscale hostel-type property run by hip Icelanders, to a 5 star resort hotel located off the South Shore road and close to the volcanos and glaciers.

To the northwest of Reykjavik is Isafjordur – a small town reminiscent of Haines, Alaska.  It is here that we will be offering some great hiking, biking and fishing trips as well as a walking tour of the town include its Maritime and Heritage Museum.

Situated on the north coast is the charming yet sophisticated town of Akureyi. We have arranged whale watching, flightseeing, horseback riding and hiking. Golfers will appreciate a chance to play the world’s northern most golf course. Overnighters can play the course at midnight if they wish.

Travel agents – get ready for lots of clients requesting Iceland – either by cruise ship or by plane. Don’t worry –  ShoreTrips will be help you plan the perfect visit.