On Our Bucket List: CroisiEurope’s Africa, Nine Days From US $6,319 | TravelResearchOnline

On Our Bucket List: CroisiEurope’s Africa, Nine Days From US $6,319

CroisiEurope has officially kicked off its newest river cruise tours: combination land-and-cruise voyages that explore Africa’s Chobe and Zambezi rivers. The journeys include a four-day voyage aboard the African Dream, a brand-new luxury river cruise vessel that carries only 16 guests in its eight suites.

The cruise portion is coupled with a land-based tour that explores the vibrant city of Johannesburg and the stunning wildlife of Chobe National Park, with stays in luxury lodges, and an exploration of magnificent Victoria Falls.

The nine-day package begins at $6,319 per person and is currently open for booking at CroisiEurope’s website.

Beginning in December 2017, these nine-day itineraries begin in Johannesburg. On the first day of CroisiEurope’s South African cruisetours, you will meet in Johannesburg before continuing on to Soweto, where you’ll visit the home of Nelson Mandela, the South African anti-apartheid revolutionary who served as president of South Africa from 1994 to 1999. Enjoy a performance by Zulu dancers during dinner before returning to your hotel in Johannesburg.

The next morning, fly with South African Airways to Kasane, Botswana, for a two-night stay in a safari lodge. On each of the two days in Kasane, you will go on safaris in Chobe National Park, where there is a large concentration of elephants, zebras, savannah buffalo, exotic birds and other wildlife. 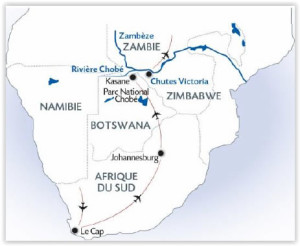 On day five, transfer to the African Dream, moored along the Chobe River. Currently under construction, the African Dream will boast eight staterooms, all of which will feature their own private balconies. Public areas will include a full-service lounge and bar, along with a rooftop patio complete with a swimming pool and chaise lounges. A restaurant provides three meals per day along with panoramic views of the passing scenery.

As the sun begins to set, African Dream sets sail for a nautical safari along the Chobe River. The next morning brings adventures as you hop aboard jeeps equipped with water misting spray nozzles to keep things cool during the heat of the day, which often becomes stifling with the increase in temperature and humidity.

You’ll visit a small village in Namibia, where you’ll learn about the local culture and customs. During dinner, enjoy Namibian music and dances as you dine.

For wildlife lovers, CroisiEurope’s journeys by land and river get you up-close and personal with creatures like elephants and hippopotamuses. Chobe National Park has a myriad of swamps, flood plains, lakes and rivers and makes riverboat transportation the ideal way best experience its abundant wildlife including zebras, water buffalos, antelopes and birds.

At only 731 kilometres (454 miles) in length, the Chobe isn’t well-suited for long 10-and-14-voyages like those that navigate the farthest reaches of the Danube and Rhine in Europe. What CroisiEurope has done, however, has been to create a four-day post-cruise trip that explores Chobe National Park, Impalila Island, and breathtaking Victoria Falls.

One of the Seven Wonders of the Natural World, Victoria Falls is one of the must-see sights in southern Africa. Situated on the border between Zambia and Zimbabwe, water flowing over Victoria Falls drops some 108 metres (354 feet) and funnels the entire width of the Zambezi River through a series of six distinct gorges. Discovered in 1855, Victoria Falls attracted Europeans who first started coming here for touristic purposes around 1900. The attraction had grown to be so popular that by 1904 a hotel was built for travellers making the journey overland from as far away as Cape Town.

A river cruise through Southern Africa isn’t what most people will likely choose as their first experience with this type of vacation. Like land-based African safaris, CroisiEurope’s new cruisetours will appeal most to those who have experienced the rivers of Europe like the Danube and the Rhine, and who are looking for increasingly exotic and new places for their next river cruise vacations.

These cruisetours through South Africa are just one of the many diverse itinerary options that CroisiEurope offers. In addition to the line’s more standard river cruise journeys through Europe, CroisiEurope operates sailings that explore Russia’s Volga River; the Mekong River that stretches through Vietnam and Cambodia; voyages along Italy’s less-travelled Po River, and even intimate Barge Cruises through France that explore the country’s legendary canals.

For the experienced and adventurous river cruiser, CrosiEurope has a lot to like about its entire schedule, but its new itineraries in southern Africa point to a growing demand for itineraries that are increasingly exotic.

Because it is a cruise tour, this isn’t a good choice for those who relish the ability to unpack once for multiple days at a time, since the itinerary can best be thought of as being comprised of three different segments. But like the successful cruisetours through many parts of Russia and Asia, these land and river-based journeys provide a convenient way to see much of southern Africa, without the intimidation and cost of trying to arrange this independently.

The largest advantage, however, is CroisiEurope’s European heritage, international passenger base, and outstanding commitment to quality. Owned and operated by the Schmitter family of Strasbourg, CroisiEurope features itineraries that are hand-picked and exciting. The company bucks the trend from what the larger river cruise lines are doing. CroisiEurope blazes its own trails, and becomes the second major river cruise line (after AmaWaterways) to begin offering voyages along the Chobe River.

If you’re looking for a very different kind of voyage next year, a holiday river cruise tour through the heart of Southern Africa certainly fits that bill.