What I Learned About Viking River Cruises While Cruising The Rhine

Koblenz, Germany — It had been awhile since I was on a Viking Longship, and although I had attended christening events and even did a couple of weeklong cruises on Viking a few years ago, too much time had passed since I’d stepped on a Longship. Last Sunday that changed when I boarded Viking Hlin in Basel for a seven-night “Rhine Getaway” voyage to Amsterdam.

After a quick transfer from Basel’s airport to the St. Johann docks, I felt good stepping into the familiar light-filled reception area of Viking Hlin (named for the goddess of protection in Norse mythology). 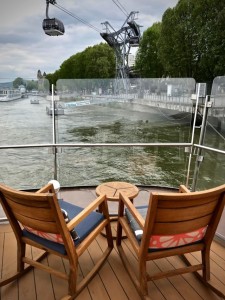 Close to the edge on Viking Hlin’s Aquavit Terrace while docked in Koblenz. No other river cruisers boast such large front-of-ship open areas on the lounge level. © 2017 Ralph Grizzle

All 46 of the Longships showcase virtually the same features, so I was immediately familiar with my surroundings. I checked in, which took all of two minutes, and was escorted to my category A Veranda Stateroom, number 333, situated on the starboard side.

After a near-sleepless night across the Atlantic, I was glad to be settled into the cozy confines of my 205-square-foot stateroom (the measurement includes the balcony). Tired but excited about the days ahead on the Rhine, I showered and afterward fell into bed for a quick sleep to refresh myself before awakening for the evening activities.

At 9 p.m. we sailed from Basel for the weeklong voyage that would visit Breisach (Germany), Strasbourg (France), Rudesheim, Koblenz and Cologne (all in Germany), and Kinderdijk (a village in the Netherlands known for its iconic windmills). Our trip will conclude Sunday morning in Amsterdam.

Along the way, there would be many side trips, to the Black Forest and Colmar on one day, a trip to Heidelberg on another, visits to castles and dinners ashore. Complimentary excursions were offered at each stop along the way and about a dozen optional tours were offered, ranging in price from €49 per person to €189, the latter being a full-day excursion called Taste the Best of Alsace (Viking Hiln’s program director, Candi Finkelstein, told me that this was the number one rated tour on the Rhine Getaway itinerary).

Fast forward: Midway through the voyage, as I sat in the Aquavit Lounge on a gorgeous day while Viking Hlin was docked alongside the Deutsches Eck in Koblenz, I realized something I had nearly forgotten – and that was just how good Viking is. I, and others on this voyage, have found much to appreciate about Viking Hlin, the attractive decor of the ship, its comfortable environs and an eager-to-please-and-seemingly happy-to-be-there staff.

I could give many shout outs, but here are a few: to our ever-smiling bartenders, Ivan from Macedonia and Krista, whose heritage is a mix of Spanish and Asian; to Armin, our enthusiastic Austrian hotel manager; and to Annie, who kept my stateroom clean and crisp and who always garnished my fruit tray with my favorite berries each day. It’s a nice touch that Viking offers a small plate of fruit in each stateroom, replenished daily.

Before heaping more praise on the Longships, though, I have a few quibbles that I’ll get out of the way. Here they are: Viking would do well to bring bicycles on board and to offer those for complimentary use. Why are there no bikes on Viking’s Longships? There’s no room to store bicycles. Viking optimized space on the Longships to focus on public spaces and to add more staterooms and suites than you’ll find on other river cruisers.

I missed having an on-board gym too. True, the gyms are tiny on river cruisers that have them, but still, I appreciate the option to get the blood pumping for a few minutes by exercising while cruising. 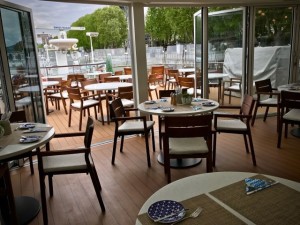 The Aquavit Terrace, made possible by squaring off the bow of the Longships. © 2017 Ralph Grizzle

Those are my only quibbles, and with some creativity (such as walking the sundeck track to get your exercise or using the onboard concierge to book bikes ashore for you), active travelers can get past those grumbles to experience what are arguably the most gorgeous ships on the rivers. Because Viking’s focus was on public spaces and accommodations, the Longships boast features that few, if any, other river cruisers can claim, notably, two-room suites and my favorite front-of-ship-space, the Aquavit Terrace.

Characterized by classic, minimalistic Nordic decor, the Longships were originally designed by the Norwegian-born chairman of Viking River Cruises, Torstein Hagen, and Olso-based naval architects Yran and Storbraaten. Imagine the interior of a Volvo S90, all done up with leather seats and birch wood inlays, and you’ll have a sense of the interiors of the Longships.

Viking’s vessels feature light palettes throughout complemented by a plethora of panes of illuminating glass, lots of wood, herb gardens, marble slabs and mossy stones flanking the attractive wooden staircases, along with leather furniture and beautiful fabrics, including wall linens that appear to be hand-stitched.

Look closely, in fact, and you’ll see that Viking paid a lot of attention to detail. Few people who I spoke with noticed until I had mentioned the leather hand-railing along the staircase. The feel of the leather adds to the sense of a stylish, yet simple, elegance, and at a hefty cost to Viking. The leather has to be replaced every two years. 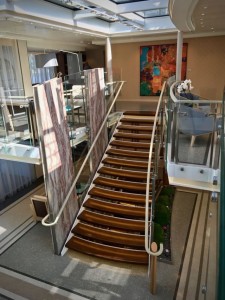 Not one feature on the Longships could be described as over-the-top. Nothing jolts the senses or the eyes. To the contrary, the setting is pleasing, aesthetically and otherwise. The overall sensation that I feel on the Longships is a soothing one. I get something akin to a sense of serenity, particularly during moments when the play of light conspires to create works of art, such as in the reception area, where glass doors and the glass ceiling bathes the interior with sunlight.

Will the pleasing palette make a difference in your river cruise? Hard to say. What may, however, is the Aquavit Terrace. No front-of-ship public space on a European river cruiser comes close to matching the Aquavit Terrace. While on most river cruise vessels, the outdoor space at the front of the lounge is tight and obstructed by anchors and other marine equipment, Viking’s Longships are free of such distractions.

The Aquavit Terrace features an enlarged area of indoor/outdoor space that is as gorgeous as it is unobstructed. The bow is nearly squared off with the anchor spindles and other equipment hidden beneath the decking. The result is something like a platform that extends within about two feet of the front edge of the ship. Teak rocking chairs, with cushions, are placed behind a plexiglass barrier that breaks the wind while providing views of the river and the landscape of Europe along the river. It is a seemingly small feature but one that looms large on sunny days on the river. Pull up a chair. The Aquavit Terrace is the perfect place to pitch camp for a morning, afternoon or evening of scenic sailing.

The Aquavit Terrace is also used as an optional dining venue to the main restaurant one deck below. Today in Koblenz, for example, continental breakfast is offered from 6 a.m. until 11 a.m., a light, a buffet-style lunch is offered at noon, and a light dinner, featuring Norwegian salmon, along with salads and other items, is offered at 7 p.m. As in the restaurant, wine and beer are served at no charge during lunch and dinner.

Affordable Luxury, Quality Through And Through

Viking River Cruises (and Viking Oceans) boast a Norwegian heritage. That, and Viking mythology, play a strong role in the fleet’s makeup and decor. The Longships emphasize what Viking execs refer to as “affordable luxury.” Many of the luxury components are in the details. 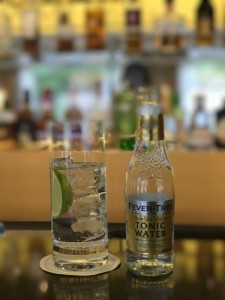 Viking uses quality touches throughout, such as Fever Tree tonic in bottles. I saw no plastic on board Viking Hlin. © 2017 Ralph Grizzle

On most river cruisers, for example, you’ll see soft drinks, sodas and tonics served from fountain dispensers or from plastic bottles. Not so on Viking’s Longships. You’ll find glass bottles of Coke, Diet Coke, Coke Zero, sodas and tonics. In fact, when it comes to tonic, Viking serves a gourmet brand known as Fever Tree. Torstein Hagen is a fan of gin and Fever Tree tonic, and I get the feeling that he would not have anything on his beloved Longships that we would not himself appreciate, which brings me to the Silver Spirit Beverage Package.

At €300 per cabin, double occupancy, the cost of Viking’s all-inclusive beverage package seem steep at first glance, but it can be quite a value when you consider the quality of the beverages offered. Are you a Scotch drinker? Then you may know of Highland Park Ragnvald, which goes for more than $500 a bottle on the internet sites I looked at. Yet on Viking, you can enjoy as many glasses as you like of the single malt Scotch whiskey as part of your Silver Spirit Beverage Package. Without the package, a 4 cl shot of Ragnvald goes for €22. 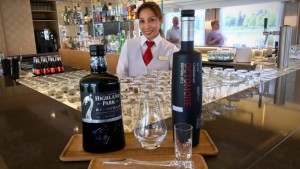 Krista, one our wonderful bartenders on Viking Hlin, poured us a glass of single malt Scotch whiskey – on more than one night. © 2017 Ralph Grizzle

Let’s do the math. My cruise spans eight days. For the purposes of imbibing, let’s knock it back to seven days. That is to say that yes, I might belly up to the bar on embarkation day for a premium drink but it’s not likely that I will parch my thirst with alcohol on the morning of disembarkation. €150 divided by seven days comes to about €21.50 per day. That’s one heck of a bargain when you consider the costs and quality of the beverages on the menu.

In the coming weeks, I’ll be talking more about Viking’s affordable luxury. My experience so far this week on Viking Hlin, however, has reassured me that those cruising with Viking should come away with the feeling of having received a good value vacation on what may just be the most stylish ships on the rivers. 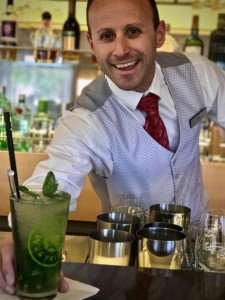 The best bartender on the rivers? Ivan, from Macedonia, made our trip special, using fresh mint from Viking Hlin’s top deck herb garden to make this mojito. © 2017 Ralph Grizzle

Add to that Hagen’s penchant for quality, which manifests itself throughout the Longships, and Viking’s focus to deliver “affordable luxury,” apparent in such surprising small touches as heated bathroom floors in the staterooms, and what you have is a match made, well, in Valhalla. And that, as any good Viking would know, is the Norse version of heaven. It couldn’t get any better than that.