Posted on June 15th, 2017 by Simone Hasskew in Spotlight 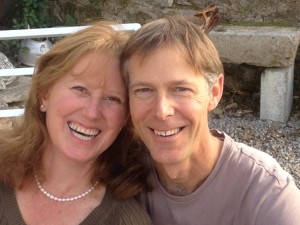 Lisa and Steve Cavanagh opened the doors to Le Bouleau, a bed and breakfast located in Aveyron, France, in 2015. Originally from South Africa, Lisa and Steve packed up and moved to Aveyron for a fresh start, and the idea of a bed and breakfast in the back of their minds. With previous experience in renovation and building they worked tirelessly to make Le Bouleau a reality. Lisa’s passion for cooking and Steve’s love of cycling make any stay at Le Bouleau an adventure; they host scenic cycling tours and culinary tours on top of providing fresh ingredients for their guests from their own gardens! Lisa and Steve go above and beyond to make any stay at Le Bouleau a memorable one.

Travel Research Online (TRO):  You moved to France from South Africa with your 2 children, 5 cats, 2 dogs, and a parrot. I think it’s every traveler’s dream to leave the normalcy of their home and venture to a foreign country where they renovate an old property and start a bed and breakfast. How did you make the transition from dreaming the idea to living it?

Lisa Cavanagh (LC): Quite easily. We were self-employed in South Africa and had been heavily involved in building our home and 2 other cottages on the farm, so we had the skills to start a new farming venture and renovate the buildings. We were never daunted by starting afresh. Our goal was to find a better place to bring up our children, so we had no difficulty in committing to the move. It also helps to have a “How hard can it be” attitude.

TRO: What drew you to France? What makes France an attractive destination for travelers?

LC: Steve had been to France before and always enthused about the landscape, the climate and the people. Being avid Tour de France fans, we were also seduced by the wonderful images we saw on the TV coverage. As a tourist destination, France has it all, from the Alps and Pyrenees to the beautiful beaches in the south. It has history, culture and wide open spaces. Where we live there are gorgeous rolling hills and a rural way of life that disappeared from most of Western Europe fifty years ago.

TRO: You transformed a traditional stone barn into a luxury bed and breakfast (chambre d’hôte). Did you do most of the renovation work yourselves?

LC: We had help to install a new floor and to create the openings for the doors and windows; the stone walls are 80 cm thick! Other than that, we did all the internal building work and plumbing ourselves, but when time was running short, we contracted an electrician to do the wiring. The B&B occupies 320m² and having carried, installed and taped 240 sheets of drywall, it’s not an exercise that we’re in a hurry to repeat.

LC: We provide the bikes, routes, navigation devices and on the road backup. Some of the days include a picnic lunch which we provide at a designated place, otherwise we’ll make a reservation for lunch. It goes without saying that accommodation, meals and drinks are included in our price.

TRO: You and your husband cared for a farm near Johannesburg where you grew herbs, edible flowers, and salad mixes for restaurants. Now that you both are running Le Bouleau, are you still able to find time to garden?

LC: Time is precious and we took a sabbatical from growing vegetables while we were building. It’s unfortunate that the summer months are the peak period for both guests and growing vegetables, but the guests come first. We continue to plant the tunnels so that we have fresh produce for our guests, and we still grow and sell saffron and strawberries during autumn and spring respectively.
TRO: A stay at Le Bouleau turns out to be a real culinary retreat. What can guests expect to experience on one of Le Bouleau’s culinary getaways?

LC: Our culinary getaways are all about experiencing the true living of Aveyron and having fun. We have demonstrations by Michelin-starred chefs and eat traditional French meals in village restaurants. We fit in time to visit some of the prettiest villages in France and then go back to Le Bouleau for a champagne tasting, or to enjoy a glass of local wine while a guest chef entertains us as he prepares supper. We shop with the locals at the weekly market and visit local wine producers. The week ends with a gala dinner at the Michelin starred Le Vieux Pont restaurant in Belcastel, widely acknowledged to be one of France”s most beautiful villages.

TRO: Is it true that neither you nor Steve spoke French before you moved to Aveyron? Does that mean that Aveyron, in general, is welcoming and accommodating to travelers who do not speak the native language?

LC: We both did a self-study crash course before we left South Africa, and were able to buy a baguette when we arrived. Soon after we arrived, we took lessons for a year, but most of what we have learnt has been though conversing with the locals. I don’t think either of us will ever forget the anxiety that came with standing in a queue at the shop or post office, waiting to place an order, and knowing that every ear in the place was keenly tuned in to what the new arrivals were about to say. The pressure was immense! That said, the people of Aveyron have been fantastic, and have shown us great kindness. As with France in general, if, as a tourist, you learn just a few simple words, and are courteous, you will be welcomed like an old friend. Of course, you could just come on one of our tours and we’ll make all your language worries go away.

TRO: Let’s say that there is a traveler who will journey to France only once in his/her lifetime. What else would you want this traveler to know about Le Bouleau before they decide where to stay?

LC: We live in la France profonde, literally meaning deep France. It is the traditional France of yesteryear. It is a place where farmers still gather at 8 o’clock on a Sunday morning to eat a traditional meal at huge communal tables in the village hall. It is a place where neighbours look after each other, and men still wear berets. It is a France untouched by globalisation. At Le Bouleau you can experience all of this, and our warm hospitality!

Share your thoughts on “Lisa and Steve Cavanagh, Proprietors of Le Bouleau Bed and Breakfast”