Posted on July 13th, 2017 by Simone Hasskew in Spotlight

A voyage with Windstar Cruises evokes the feeling of being on your own private yacht. Large enough to pamper and indulge cruisers yet still small enough to anchor in secluded coves or dock in the heart of tiny Old World villages that larger ships cannot reach, Windstar Cruises offers the best of both worlds.

Sail with Windstar and discover not just Old World villages, but the remote coastline of Costa Rica, the incredible Panama Canal, and the secluded islands of Tahiti and the Caribbean. Windstar Cruises is even offering a new lineup of itineraries that will take travelers to Alaska, Asia, Arabia, and Canada & New England.

On a Windstar Cruise ship you will find fewer than 300 guests, one of the features of this elegant line that makes its passengers feel as if they are aboard their own ship; no crowds, no lines, and no formal nights will be found on a Windstar ship. Instead, ship guests will experience a freedom to explore and friendly atmosphere. 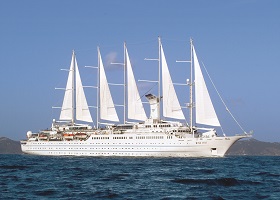 Visit the Captain on the Bridge or dine under the stars; with a vacation from Windstar Cruises you can roam the spacious decks or spend a secluded evening in your ocean-view stateroom or suite, the only rooms offered on board a Windstar Cruise ship. So, no matter where you stay, you can watch from the comfort of your room as the ship cruises through some of the world’s most magnificent fjords and shorelines. Or spend your anchored time on the complimentary Water Sports Platform found on the back of each Windstar yacht. There is no better way to take in the scenery of the beautiful port around you like swimming, paddle-boarding, or kayaking in the pristine waters that surround the ship.

Windstar’s flagship yacht, Wind Surf, catches the eye when she glides grandiosely into port with her sails to the wind. In her rooms you will find all new finishes due to a recent renovation, but her beauty is more than just in her appearance. Aboard the ship you can make an entrance in the beautiful reception area, but the elegance doesn’t stop there. Once in your room, bowls of flowers and fresh fruits await you. The soft seascape colors of the rooms invite you to an oasis of relaxation. Windstar’s line of all-suite yachts, like the recently renovated Star Legend, invite you to vacation in ultimate luxury and relaxation. Their all-suite ships are large enough to pamper and entertain, yet still small enough to coast through beautiful harbors and coves that other ships cannot reach. Spend a night in the casino, an afternoon in the library, or pamper yourself in the peaceful WindSpa; with magnificent ocean views from each suite, you will have no problem relaxing aboard one of these spectacular vessels.

Windstar Cruises is known for their award-winning service; Star Legend received Best Cabins, and Wind Surf received Best Dining in the Small Ship category in the Cruise Critic Cruisers’ Choice Awards, as well as the Top Ten Cruise Line for Honeymooners by BRIDES Magazine. USA Today awarded their entire fleet among the Top 25 Most Beautiful Cruise vessels, and these are just a few of their awards from 2017! Since 2011 they have claimed 90 awards for their ships and services, quite a feat of accomplishment. 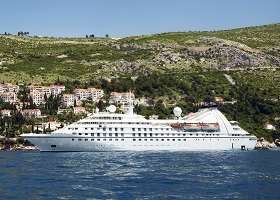 Aside from being the leading small ship cruise line, Windstar Cruises is also the official cruise line of the James Beard Foundation after launching a partnership to celebrate food and wine themed cruises. The Foundation, created to recognize and celebrate the chefs and restaurateurs that advance America’s culinary arts, and Windstar Cruises have worked hard to expand their culinary events, demonstrations, and menus. This has given guests aboard Windstar’s ships more opportunities to indulge in meals made with locally sourced ingredients and created by some of the most recognized culinary talent in the world! You can find out more information on Windstar Cruises and their partnership with The James Beard Foundation here.

On a luxury cruise with Windstar Cruises you will experience culture in ways that are personal, authentic, and unscripted as if you had arrived in port on your own private yacht! So, what are you waiting for?

To find out more about Windstar Cruises and their array of sailing options, you can visit them at www.windstarcruises.com

Share your thoughts on “Set Sail to Wonder with Windstar Cruises”