Watch the recap of our September 2017 barge trip along France’s Petit-Seine & Yonne rivers on CroisiEurope’s Raymonde.

END_OF_DOCUMENT_TOKEN_TO_BE_REPLACED

As we move into the season of mellow fruitfulness, thoughts should turn to offering clients imaginative tours packed with visits to interesting historic castles, magnificent stately homes and beautiful gardens, perhaps linked to one of our many outstanding garden shows.  Your target audience will be Master Gardeners, Friends of Arboreta and Botanical Gardens, Orchid, Rose and other specialist societies and your local Garden Club.

However, a wider audience might be interested in being offered say a Cornwall tour with a day at the Cornwall Spring Flower Show with the rest of the itinerary focusing on Arthurian legends, Poldark, Doc Martin and learning the difference between a Cornish and a Devon Cream Tea.  They’re not the same!

END_OF_DOCUMENT_TOKEN_TO_BE_REPLACED 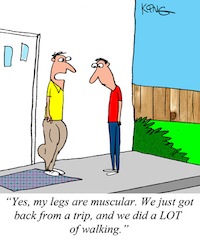 How To Double Your Productivity
by Mike Marchev

There is an old saying that goes something like this: “You can’t do everything at once, but you can do something at once.” This really is pretty good advice.

I politely suggest that you follow this advice. Do something, and then do it again tomorrow and the day after tomorrow. Then do it again, and then do it some more. If whatever it is you are doing appears to be working, keep doing it. If does not seem to be working, consider tweaking your activities or select a new one to pursue. Just keep doing something. Action and execution are two beautiful words that represent half the battle.

END_OF_DOCUMENT_TOKEN_TO_BE_REPLACED

I was reminded once again while presenting in Las Vegas the power one has when standing in front of a group full of people eager to better themselves in both their personal and business lives. No speaker in their right mind takes this privilege for granted. As a matter of fact, in the world of professional speakers this is called “The Privilege of the Platform.”

END_OF_DOCUMENT_TOKEN_TO_BE_REPLACED

Central Vietnam is a quite diverse area, with many cities and sites to visit. From outstanding beaches to caves and excellent national parks, Central Vietnam is a destination on the rise. Thanks to Super Value Tours, the supplier sponsor of this article, you won’t miss out on any of the excitement and history during your trip to Central Vietnam.

END_OF_DOCUMENT_TOKEN_TO_BE_REPLACED

3 Social Ad Hacks You May Have Missed
by Catherine Heeg

Do you want an easy way to re-connect with past clients?

Do you want to attract potential new clients?

As a busy travel & tourism pro you’re faced with the dilemma of where to spend your precious time and marketing efforts.  Attracting potential new clients and keeping strong relationships with current clients is probably at the top of your to do list, but may often times get buried beneath accounting, phone calls and creating itineraries.

END_OF_DOCUMENT_TOKEN_TO_BE_REPLACED

When everyone claims to be an expert, who should you trust? I have seen travel agents who barely know the difference between a hotel and a motel start social media groups, and suddenly have a following of thousands eagerly embracing their every word as it were the gospel.

Social media has given anyone with something to say a platform to share their opinion. Unfortunately while I can appreciate their passion, some of these forums are loaded with misinformation and unsubstantiated claims. It’s like the blind leading the blind.

END_OF_DOCUMENT_TOKEN_TO_BE_REPLACED

Michael Dunne, Business Development Manager for Sky Bird Travel & Tours, started in the travel industry thirty years ago. He has served on the board for both the Midwest Business Travel Association (now Chicago BTA), and Mississippi Valley ASTA; Michael was also a founding member of SITE Chicago. Often found sharing sales ideas and strategies with other travel agents, Michael is always ready to demonstrate Skybird Travel’s commitment to the travel agent community. Skybird participates in multiple tradeshows per year, and Michael uses these opportunities to mix with new agents while helping them develop their own business, and achieve success by teaching them how to utilize reputable air consolidators, like Skybird.

END_OF_DOCUMENT_TOKEN_TO_BE_REPLACED

The National Association of Career Travel Agents (NACTA), was established in 1986 as the original association with a mission to represent the interests of the individual travel consultant, and now has expanded to all professional sellers of travel. NACTA host travel agencies and suppliers support this growing distribution channel.

END_OF_DOCUMENT_TOKEN_TO_BE_REPLACED

Have you ever wondered what life would be like without a bunch of really tall men running up and down a hardwood court tossing a ball around before jamming it through an iron hoop? I am talking about the NBA.

A few years back I was reminded of one of life’s most important lessons while watching a playoff game between two very talented teams. I’ve said it a thousand times; I’ve known it for years; and I’m about to say it again.

END_OF_DOCUMENT_TOKEN_TO_BE_REPLACED

I was once speaking to a real estate agent who appeared to be a real cracker jack. I mistakenly referred to my job, for lack of a better reply, as being a “motivational speaker.” She said in not so many words that she didn’t buy into the “motivational speaker advice” she has heard at company meetings for the past 25 years.

I quickly supported her stance and replied, “Neither do I” without losing a beat. I then informed her that I was not a motivational speaker at all, and that what I did for a living was “stimulate people.”

END_OF_DOCUMENT_TOKEN_TO_BE_REPLACED

With a long and magnificent coastline and an incredible history, the county of Cornwall is the perfect slice of the United Kingdom to take a trip to. Complete with activities for all ages that educate on what Cornwall’s past and present, this county should be on everyone’s travel list. Thanks to Back-Roads Touring, the supplier sponsor of this article, you will not miss a moment of what Cornwall has to offer.

END_OF_DOCUMENT_TOKEN_TO_BE_REPLACED

This is a true story. There is a lesson here somewhere so take a minute and focus on the next few words. Picture me in front of the Double Tree Hotel in downtown Memphis, TN, right across the street from the ballpark. It is raining lightly as a major thunderstorm has just passed through town. It is approximately 8:30 a.m. The Double Tree is adjacent to the Greyhound Bus Terminal (Key Point). END_OF_DOCUMENT_TOKEN_TO_BE_REPLACED

Today’s technologies have empowered customers in ways we never would have imagined ten years ago. With the touch of a few buttons, customers can have all the information they want at their fingertips.

Also, they also have the ability to decimate a business with a few taps on their phone with a negative review, or worse. This is particularly true for smaller agencies that tend to have fewer reviews—they will stand out! END_OF_DOCUMENT_TOKEN_TO_BE_REPLACED

A few years back Wayne Chrebet called it a career after playing eleven years with the NFL’s New York Jets. So what’s the big deal?

Well, Wayne had no business playing in a game which happens to be our closest representative of legalized violence. For you arm chair Monday-morning quarterbacks and wives or girlfriends of these same wanna-bees, I understand you may take exception to my heartfelt feelings. I happen to know “a thing or two” about the game. It got me to college on a free pass, and then was responsible for breaking an ankle and separating a collar bone in lieu of payment.

END_OF_DOCUMENT_TOKEN_TO_BE_REPLACED 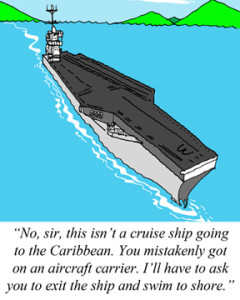 The Latest and Greatest
by Susan Schaefer

In the chaos of hurricanes over the past few weeks, other cruise news has gone unnoticed. So let’s take a break from Hurricanes Harvey through Maria, and look at the latest improvements rolled out in Espresso, the booking engine used by Royal Caribbean, Celebrity, and Azamara.

END_OF_DOCUMENT_TOKEN_TO_BE_REPLACED

Video: A Cruise Along The Seine With AmaWaterways
by Ralph Grizzle

The Normandy region is renown for its beauty, its palatable flavors, its gorgeous countryside and the D-Day Landing Beaches. Bookended by Paris, a cruise along the Seine speaks to the sublime pleasures of exploring a narrow ribbon of river that inspired a handful of French Impressionists and that continues to inspire Francophiles today. Check out our feature video.

END_OF_DOCUMENT_TOKEN_TO_BE_REPLACED

Ranking as one of the most beautiful cities in China, Hangzhou is a place where inspiration thrives and ancient culture intertwines with the present day. The breathtaking imagery of the city is reason alone enough to visit. Thanks to Stunning China, the supplier sponsor of this article, you will not miss your chance to see the many gardens and temples of Hangzhou.

END_OF_DOCUMENT_TOKEN_TO_BE_REPLACED

Make The Call!
by Mike Marchev

There’s no time like the present to reach out to a client with a phone call.

There’s an old saying that reminds us, “If it could be said, it probably already has been said.” You would probably be wise if you didn’t quote me word for word, but regardless of the exact phrasing, the message is worth repeating. Most worthwhile stuff has already been said, done, talked about, initiated, tried, imitated and implemented. Most worthwhile stuff has also been forgotten, ignored, glossed over and replaced by some not-so-good stuff.

This is especially true for words of wisdom when they’re directed at the sales and marketing front. Everything worth saying has already been said, but there’s more to the story.