There’s no time like the present to reach out to a client with a phone call.

There’s an old saying that reminds us, “If it could be said, it probably already has been said.” You would probably be wise if you didn’t quote me word for word, but regardless of the exact phrasing, the message is worth repeating. Most worthwhile stuff has already been said, done, talked about, initiated, tried, imitated and implemented. Most worthwhile stuff has also been forgotten, ignored, glossed over and replaced by some not-so-good stuff.

This is especially true for words of wisdom when they’re directed at the sales and marketing front. Everything worth saying has already been said, but there’s more to the story.

END_OF_DOCUMENT_TOKEN_TO_BE_REPLACED

Why Not You?
by Mike Marchev

I enjoy watching the talent show American Idol. I often mentally vote for an eventual loser, but I also thought Frazier would last two weeks before the network pulled the plug. I went on record to forecast that Megan Mullally (Will & Grace) would last a little less than a New York minute.

Back to American Idol. I just love seeing talent. All those kids can sing. Most are very good. But why weren’t you up there sharing the spotlight?

END_OF_DOCUMENT_TOKEN_TO_BE_REPLACED

Email has always been a double edged sword as far as I am concerned. It definitely provides an easy and fast option when communicating your ideas to others. But it also must be remembered that the tone and “voice” of a printed message is 100% determined by the receiver. Their immediate mental attitude determines whether your message is interpreted properly or not.

END_OF_DOCUMENT_TOKEN_TO_BE_REPLACED

Saving Wildlife: What’s In It For Humans?
by Jane Behrend

“Saving wild places through travel” is our vision statement at Emerging Destinations. A recent article that we came across channels that philosophy and we wanted to share.

Why should people care about wildlife? BBC poses that critical question in an article by Michael Marshall on the British news service’s global website — What is the Point of Saving Endangered Species?

END_OF_DOCUMENT_TOKEN_TO_BE_REPLACED

Iguazu Falls is the largest waterfalls system found in the world. Though the Iguazu river flows mainly through Brazil, over 80% of the falls are located in Argentine Province of Misiones. With a name consisting of the Guarani or Tupi words for “big” and “water” Iguazu Falls is a sight to see and an area to be explored if given the opportunity to do so. Thanks to Aerolíneas Argentinas you won’t miss a second of rushing water at Iguazu Falls. END_OF_DOCUMENT_TOKEN_TO_BE_REPLACED

Herbs and Spices in Grenada with ShoreTrips
by Simone Hasskew

The island of Grenada is a Caribbean paradise, full of rich spices and plant life as well as history. From waterfalls and bountiful beaches, to underwater art Grenada is a destination perfect for a getaway from the hustle and bustle of everyday life. Thanks to ShoreTrips, the supplier sponsor of this article, you won’t have a problem finding something exciting to do in Grenada.

END_OF_DOCUMENT_TOKEN_TO_BE_REPLACED

Sunday afternoons are special to me since I get to watch the last round of the weekly PGA golf tournament. These guys are good. These guys are really good. Yet every once in a while, you see the human side of really good millionaires. They too miss-hit golf balls now and then and bring hope to us amateurs. Hey! I’ve missed a number of gimme putts a number of times. In fact, more times than I would like to remember. END_OF_DOCUMENT_TOKEN_TO_BE_REPLACED 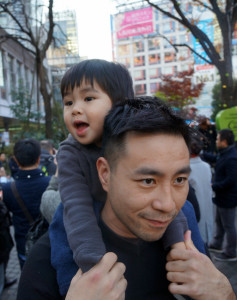 Roy Liao is the Vice President of Product Development for wholesale tour design company Super Value Tours, which is based out of Los Angeles, California. Roy’s passion for travel and his family roots as the child of immigrant parents from Taiwan are just a few of the many things that help Roy find and share the best parts of many destinations throughout Asia. Raised in the United States, Roy Liao takes pride in Super Value Tours’ ability to design tours in a different way so that the travelers can have the best experience possible. Roy and Super Value Tours take into account things such as language and cultural barriers when designing their tours. Not only is Roy great at finding the best of each location for Super Value Tours’ travelers, but as a foodie he knows where the best eats are.

END_OF_DOCUMENT_TOKEN_TO_BE_REPLACED

Maybe It’s Time (Again) To Reinvent Ourselves
by Mike Marchev

Those of you who have come to know me, realize that I am a bona-fide, bookstore junkie. On my way to somewhere last week, I was once again sucked into an airport bookstore (they build them for people like me) and exited the facility 25 bucks lighter.

Now the proud owner of “The Daily Drucker,” a 360 article composite of business-related thoughts penned by the famous Peter Drucker himself, I flipped to January 25th, page 27 to the article titled Reinvent Yourself.

END_OF_DOCUMENT_TOKEN_TO_BE_REPLACED

Most travel agents are the same–6 suggestions to be different!
by John Frenaye

Last week, I was reminiscing about my younger days bartending in Philadelphia, and I could not help but smile about the antics of an old friend whose energy and verve (some might say nerve)  literally knew no bounds. The guy was the life of the party. He was never down. He never took no for an answer And everyone always wanted to be with or near him. As a result, he is an incredibly successful businessman, writer, speaker, and entrepreneur. Pat Croce started his career as a physical therapist for the Philadelphia Flyers and eventually ended up owning the Philadelphia 76ers and taking them to the NBA finals in 2001. Since then, he has moved on from one success to the next and is now happily retired. END_OF_DOCUMENT_TOKEN_TO_BE_REPLACED

Calendar This
by Richard Earls
September 17, 2017

That sound you hear is time passing. Things are winding down, and there are less than four months left in 2017. Whatever has happened during the  year, you can make 2018 more productive by gearing up for the creation of  a business plan. An important part of every business plan, and a good start at generating the appropriate mindset,  is a marketing calendar. Too few travel consultants incorporate the use of a marketing calendar in their practice. Yet, without a marketing calendar, many opportunities for strong marketing efforts slip by either unnoticed or weakly implemented.

Effective marketing drives sales. Period. But to be effective over the long term, marketing cannot be haphazard or random. Planning a marketing strategy with a calendar in front of you will ensure firstly that you are incorporating a variety of marketing efforts into your plan and secondly that you are doing so in synch with your clients’ own planning. END_OF_DOCUMENT_TOKEN_TO_BE_REPLACED 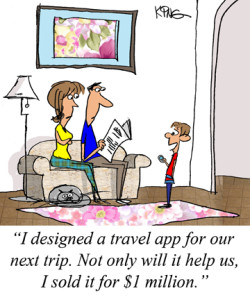 After returning from a trip to Spokane (pronounced Spow-Can) Washington. I was introduced to a new “favorite place.” Most of us think of Seattle when the word Washington pops up…or perhaps DC. But I know better now. Colorado (once a favorite of mine) has taken a back seat to the state of Washington.

In addition to the mountains and streams and relatively slow pace, it was the people who made the impact. Based on my travels, the northwest has a bunch of very nice people.

END_OF_DOCUMENT_TOKEN_TO_BE_REPLACED

Video: A Cruise On France’s Rhone River With AmaWaterways
by Ralph Grizzle

A Rhone River cruise delivers you to the epicenter of a fascinating destination. I’m Ralph Grizzle of River Cruise Advisor, and I experienced the Rhone on AmaWaterways during a weeklong voyage from Lyon to Arles. Join me for adventure on one of France’s most famed rivers. END_OF_DOCUMENT_TOKEN_TO_BE_REPLACED

Don’t Be The Shrimp Lady
by Dan Chappelle
September 14, 2017

There was a pastor who once gave a sermon about how we should love and treat each other. Afterward, everyone in the congregation told the pastor how remarkable it was. However, the very next week, the pastor gave the same sermon. Folks in the congregation had a puzzled look on their faces as it had a ring of familiarity about it. The following week, the pastor gave the exact same sermon – word for word. Afterward the church deacons decided they had enough of this nonsense and confronted the pastor, “Reverend, you have preached the same sermon for the past three weeks, why?” to which the pastor replied, “And yes I will continue to do so until we stop talking  and actually do it.”

That’s how I feel whenever the subject of professionalism comes up.

END_OF_DOCUMENT_TOKEN_TO_BE_REPLACED

Holiday in Xi’an, A Great Ancient Capital with Stunning China
by Simone Hasskew

The capitol of Shaanxi Province, People’s Republic of China is none other than Xi’an. One of the oldest cities in China, Xi’an has antiquity and culture throughout the city and should not be skipped on a vacation in China. Thanks to Stunning China, the supplier sponsor of this article, you won’t miss anything that Xi’an has to offer.

END_OF_DOCUMENT_TOKEN_TO_BE_REPLACED

Southeast Alaska, most notable for its breathtaking scenery, is best experienced on a small cruise ship. Spanning over 35,000 square miles, Southeast Alaska has many captivating areas to explore both on board and ashore. The greater maneuverability of a small ship allows for docking in areas inaccessible to large liners, giving you a front row seat to the most majestic wildlife and spectacular scenery in the world.

END_OF_DOCUMENT_TOKEN_TO_BE_REPLACED

We All Have A Need To Talk!
by Mike Marchev

My uncle called me early one morning and asked me if we could talk. Having a full plate while preparing for a trip to the west coast, I knew that time was something I did not have a lot of, but my response was “Meet me at The Galaxy Diner at 10.”

If he did not have something pressing on his mind he would not have called me. Most people have better things to do than to waste other people’s time. (I said most people.) Regardless of your success level or rung on the corporate ladder, we all need to talk…and we all need someone to listen.

END_OF_DOCUMENT_TOKEN_TO_BE_REPLACED

If you are in search a variety of rental options fitted to an array of different needs, look no further than Enterprise Holdings. The company’s three different brands, Enterprise, National, and Alamo continually rank highest in customer satisfaction. Each of these three brands serves a different walk of life, making Enterprise Holdings dramatically versatile and all-encompassing. With a philosophy of “Take care of customers and employees first, and the growth and profits will follow,” Enterprise Holdings is a company that values what it has, and takes pride in what it can provide to their customers.

END_OF_DOCUMENT_TOKEN_TO_BE_REPLACED

Your Call Should Be Important To Us….But It Isn’t!
by Mike Marchev

These were the ten words screaming at me in the headline from a Sunday Edition of The New York Times.