Posted on October 10th, 2017 by Simone Hasskew in Outposts

Located on the Southeast coast of mainland China, Fujian is a province that stands as one of the most culturally and linguistically diverse provinces in China. Due to multiple waves of migration from the central China area, this province offers varying cultural experiences throughout, making it one of the best diverse destinations to visit. 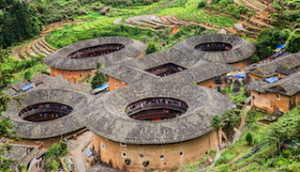 The expression “If you drive five miles in Fujian, the culture changes and if you drive ten, the language does” is a testament to the many different influences of the area. Fujian Province has much to offer its visitors, with one of its most popular experiences being a visit to the Fujian Tulous. Tulous are a rural Chinese dwellings unique to the mountainuous areas of Fujian. Most likely built between the 12th and 20th centuries, a collective of 46 Fujian tulou sites were listed as UNESCO World Heritage Sites. Most of the tulous are found together in the Fujian province, and you can even take a tour of some of the most spectacular and distinctive of the Tulous.

The Guanghua Temple is another one of Fujian Province’s exciting pieces of culture, as it stands as one of the most influential Chinese Buddhism temples in China. Built in the year of the Southern Chen Dynasty (588 CE), Guanghua Temple is located at the foot of Mount Phoenix and offers some of the most scenic views in Fujian, often drawing visitors for that reason alone. On the grounds of the Buddhist temple, which are spread over a span of over 100,000 ft, you will find many different palaces, gates, and pagodas. One of the most notable features is the stone staircase located at the entrance of the temple consisting of 199 steps. Be sure to bring your walking shoes! 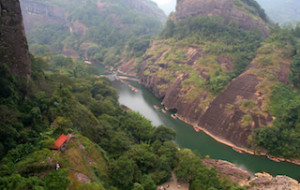 The Fujian Province is also home to multiple  UNESCO World Heritage Site, another being The Wuyi Mountains. These mountains were listed as a World Heritage Site due to the scenic, cultural, and biodiversity values they exhibit; this is just another example of the culture found throughout Fujian Province. This mountain range is the largest example of Chinese subtropical forests, and one thing that makes them very unique is that these mountains have a lengthy history of tea cultivation, another example of the cultural shifts found littered about Fujian Province. The Wuyi Mountains are the birthplace of the tea picking opera, a performance about everyday life that is both hilarious and popular to the area. Take a raft trip down the Nine-bend river after exploring the diverse flora and fauna of this incredible mountain range.

Gulangyu Island is one of the most popular tourist destinations within Fujian Province, and should not be missed on your visit to the area. A pedestrian only island that has banned all cars and bicycles, Gulangyu Island is most known for its musical roots. On the island you will find China’s only piano museum. There are over 200 pianos on the island, which is why it is sometimes referred to as “Piano Island” or “The Island of Music.”

Earlier this year Gulangyu Island was listed as a UNESCO World Heritage Site, and because of its unique streets and architecture it is also listed as a AAAAA scenic area. The opportunity to explore the island, which is also the birthplace of some of China’s most famous musicians, is not one to pass up. Gulangyu Island is unparalleled in its uniqueness.

Fujian Province is a place of beauty and culture, with sights and attractions for the whole family to enjoy. Thanks to Xiamen Air, who offers flights to three United States gateways (JFK, LAX, and SEA), you will have no problem booking a flight to visit the Fujian Province.

Share your thoughts on “Fly the Fujian Province with Xiamen Air”