Posted on November 2nd, 2017 by Simone Hasskew in Departures

Brussels, the capital of Europe and Belgium, is more than just a hub for European education and commerce. This region of Belgium is known for its medieval roots and varying cityscape. Thanks to VISITFLANDERS, the supplier sponsor of this article, you’ll get the details you need to make a trip to Brussels anything but boring. 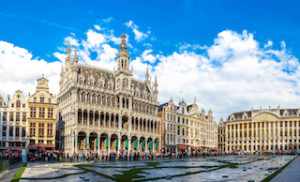 The Grand Place in a beautiful summer day in Brussels, Belgium

Brussels has blossomed from a small rural area to an important and popular destination within Europe. Located in the north central part of Belgium, Brussels contains many different sights and landmarks that make it a unique and historic place to visit. One of the most sought out experiences found in Brussels is The Grand Palace. Situated as the central square of Brussels, the Grand Palace has roots dating back to the 10th century and began as an open air market. It is also a UNESCO World Heritage Site, drawing in visitors and residents alike to explore its exciting history. On the grounds of The Grand Palace you can explore The Museum of the City of Brussels, dedicated to the folklore and long-spanning history of Brussels. You can view over 700 of the costumes for the famed Manneken Pis statue, and see dioramas of the city from the 1500’s. Exhibits include paintings, sculptures, engravings, and photos.

Also found in The Grand Palace is the Town Hall, a middle ages era gothic building. Decorated with numerous reproductions of statues depicting important people and leaders in the history of Brussels, the Town Hall is a breathtaking work of architecture to see while visiting the area. The oldest room was completed in 1420, but that is not the structure’s most noticeable feature. A 315 ft. tower stems from the Town Hall that replaced its original belfry, and can be seen from many points in the city. For a taste of something sweet, visit the Museum of Cocoa and Chocolate. Though it may be small, you can learn about the history of chocolate in Brussels as well as see a live demonstration from a chocolatier, as well as taste decadent samples of different chocolates. 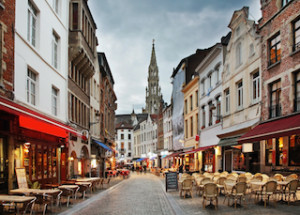 If you are looking to spend the day soaking up the sun, make sure to do so at Parc du Cinquantenaire, also known as Jubelpark. Full of gardens and picturesque landscape, this park is the perfect place for an afternoon picnic. The centerpiece of the park, the Arc du Cinquantenaire is hard to miss, erected in 1905. Many of the park’s buildings are home to museums, like the Royal Military Museum. Here you can find weapons, uniforms, and military equipment spanning multiple periods and countries. Another museum found on the premises is the Jubelpark Museum. This particular museum is one of the largest in Europe, and has collections including art from ancient Egypt, Greece, and Rome as well as artifacts from Asian countries. It is a fun and exciting way to get to see Brussels while learning about other cultures as well. With its ages of architecture and museums galore, Brussels should be next on your travel list.

To learn more about VISITFLANDERS and what Brussels has to offer, you can visit their webpage at www.visitflanders.com