Posted on December 1st, 2017 by Paull Tickner in Agent Perspectives

With the train taking the strain out of the journey, a very frequent and fast service puts the great heritage city of York just under 2 hours north of London.  If you want to miss the crowds at London Heathrow and the weekday, traffic jam crawling into our capital city, take one of the growing number of non-stop flights into the northern gateway of Manchester.  There are frequent trains from the airport and the journey time is just over 90 minutes.  Fly into Manchester and out of London?  Makes good sense to me.

Read on and discover why York makes a great base for anyone looking for a travel less, see more programme that’s packed with interesting things to do, year round!

‘Victoria’ is Just 1 Month Away

In mid-January, many of your clients will become engrossed in Masterpiece Theatre’s series 2 screening of ‘Victoria’.  As you know who they’re likely to be, start a conversation about a York-based On Location tour for just 2 of your anglophile customers to some of the great stately homes used in the filming of both series.  From the grandeur of Castle Howard where Queen Victoria stayed for 2 days on a royal visit to the breathtakingly beautiful, award winning gardens at Newby Hall set in the heart of the Yorkshire Dales.  These ‘fans’ will thank you for converting much loved fiction into touchable and memorable reality. 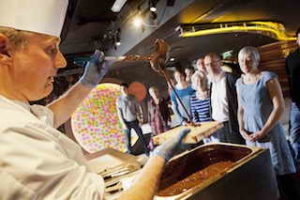 A new trail shows how York was built from chocolate via 11 chocolatey spots around the city, including Bettys Café Tea Rooms, Monkbar Chocolatiers and CHOCOLATE – York’s Sweet Story. Some of the world’s best-known chocolate brands began life in York – Rowntree’s created Kit Kat, Smarties and Aero while Terry’s came up with the Chocolate Orange and the All Gold collection.

Invasion: The Dawn of Viking York!

Between 12th – 18th February 2018 the city of York commemorates a seminal moment in British history, the conquest of England by the Great Viking Army in AD 866.  Recognised as the largest event of its kind in Europe, the annual festival explores the impact of the Viking invasion on Anglo-Saxon England with living history encampments, walks, talks and of course, dramatic combat performances. 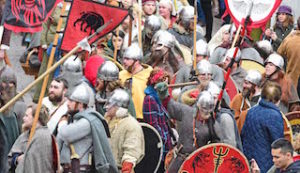 York boasts annual Viking, Roman, Early Music, literature, cycling and horse racing festivals. If you fancy something tasty then pop along to the Chocolate Festival at Easter or the renowned Food and Drink Festival in September.  New for 2018, ‘Bloom!’ a city-wide event that will celebrate all that is green fingered and floral in the city.  It also marks the 250th anniversary of The Ancient Society of York Florists – the oldest floral society in the world.  In September, the York Mystery Plays will be staged again on pageant wagons in the medieval streets and the city will close the year with their annual festive York Christmas Festival and the fantastic Ice Trail.

Mine’s a Pint of Maris the Otter

This is definitely the way to take in York’s craft and micro-breweries – join a unique educational and fun beer appreciation tour led by an expert taking you around local breweries and tap rooms.  Meet the brewers and taste some samples along the way.  Maris the Otter is a classic English ale with smooth bitterness and a very good body! For a great Yorkshire beer experience, I can thoroughly recommend a side trip to the award-winning Black Sheep Brewery in Masham and the Wensleydale Brewery in the heart of the Yorkshire Dales. 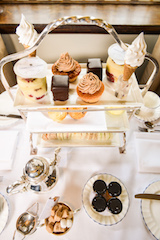 No visit to York is complete without a proper English afternoon tea! The iconic Betty’s Café tea rooms will tempt you with their fat rascals and you can be served in style on board the luxurious Countess of York at the National Railway Museum. Based on my own first-hand experience, it’s hard to beat what they serve you at the five-star Grand Hotel and Spa. Either way, make sure it’s all washed down with a proper Yorkshire brew!

For 8 weeks from 2nd June, you’ll be able to experience a thrilling and unique theatrical experience when Europe’s first ever temporary Shakespearean Theatre will be constructed in York.  Inspired by the original and legendary Rose Theatre in London, which was built in 1587, this new Elizabethan-style theatre will sit beside the iconic, 13th Century Clifford’s Tower in the heart of the historic city and it will house an audience of almost a thousand people, positioned across an open-roofed yard and three tiered balconies.  This will be a theatrical experience not to be missed.