Six Reasons Why You Should Do A Douro River Cruise Now

Posted on December 1st, 2017 by Ralph Grizzle in Deck Plans

Yes, you should do a Douro River Cruise. As soon as possible. Why the urgency? Because the Douro is still relatively undiscovered. That’s changing, though.

“In 2017, we hope to achieve more than 1 million passengers on the Douro river,” says Helena Gomes Fernandes, marketing manager for the Port Authority of Douro, Leixoes and Viana do Castelo. Don’t panic. Not all of those are passengers on overnight Douro River cruises. The vast majority are on one-day river cruises, sight-seeing cruises more or less. Hotel-style river cruisers, in comparison, carried only a little more than 63,000 guests in 2016. That’s up considerably, however, from 2012, when river ships carried only 28,000 passengers on weeklong voyages. In 2018, more than two dozen river cruisers will ply the Douro on weeklong cruises between Porto and Barca d’Alva, a distance of about 240 miles roundtrip. Indeed, interest in the Douro is surging. So get your game on and get yourself to the Douro while the river is still relatively quiet. 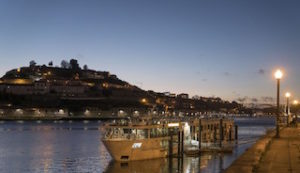 Why Do A Douro River Cruise? Six Reasons

1. The Douro is a wild river. The Douro is, by and large, wilder than any of the rivers I have cruised  in Europe. By wilder I mean that you’ll see less commercial development than you would see on the Danube, the Seine, The Rhône or the Rhine (particularly the Rhine). In fact, when I reflect on my Douro river cruise earlier this month, I think of forests and vineyards and boulders and birds. I recall a river without a whole lot of marine traffic. Yes, we encountered a few other river cruisers during our eight days on Emerald Radiance, but mostly it felt as though we had the river to ourselves. 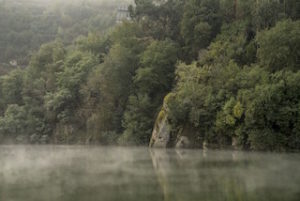 Bounded by boulders and forests, the Douro is largely undeveloped. © 2017 Lynne Harty

2. The Douro is a serene river. While we were not alone on the Douro, there was a sustained sense of serenity. Of course, there are many moments of serenity on almost any river cruise, but the Douro just felt different. Cities and villages along the Douro weren’t all that big, and certainly not congested in any way. In Barca d’Alva, dogs roamed freely on the main street, with little fear of vehicles. There was an absence of noise overall. Most times it was us, the river, the forests, the vineyards, and sleepy little towns like Pinhao, where on one evening we walked through town and up into the vineyards that framed the beautiful landscape to enjoy a glass of port as we toasted the sunset of a gorgeous day. 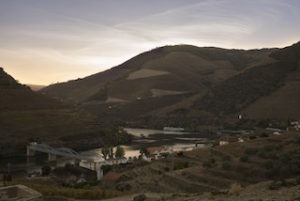 We hiked up for a glass of port and a view from the vineyards in Pinhao. © 2017 Lynne Harty

3. Portugal feels safe. As terrorist attacks made headlines in Central Europe this year and last, Portugal remained relatively quiet and unaffected. Hence, North Americans appear to feel safer in the quiet region along the Douro than in many other parts of Europe. The Global Peace Index ranks Portugal as the world’s third most peaceful nation, after Iceland and New Zealand, both of which have less than half the population of Portugal. That Portugal is physically situated on the edge of Europe is comforting for travelers seeking to avoid the heart of Europe. 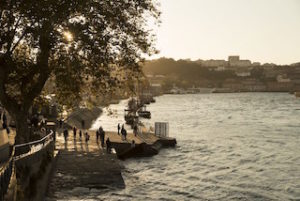 At ease under the November sun in Porto. The Global Peace Index ranks Portugal as the world’s third most peaceful nation. © 2017 Lynne Harty

4. The Appeal of Porto. Porto is the beginning and ending destination for nearly all Douro River Cruises. With its monumental bridges, Port wine cellars, colorful buildings, Old-World trams and San Francisco-like topography, Porto is a gorgeous city worthy of exploring. A stroll along the Ribiera in Porto is like a stroll along Las Ramblas in Barcelona. The latter, however, is known for its pickpockets and occasional violent crimes against tourists. The Ribiera, by contrast, is pleasant and relaxed. Another plus is that Porto, and Portugal, are relatively inexpensive when compared to other European destinations. We stayed overnight at Miragaia House (only steps from where Emerald Radiance docked) for about 100 euros per night, with breakfast, in a beautiful and spacious room. Four of us dined on grilled sardines, fried calamari, olives and bread (all Portuguese specialities) for 33 euros, total. And that included a bottle of Portuguese wine along with a view overlooking the Douro. 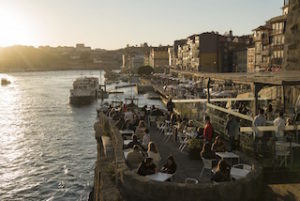 5. The warmth of the Portuguese people. The Portuguese are among the warmest and friendliest people that I have encountered in Europe. They are easy with a laugh, quick with a joke and best of all, perhaps, they are proud of their country and want to make sure you appreciate as much as they do. 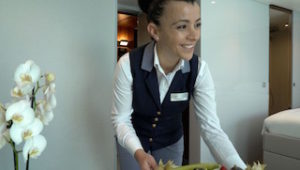 We met many warm and friendly folks in Portugal, including Daniela Moreira, Head Housekeeper on Emerald Radiance. © 2017 Lynne Harty

6. The experience of Portugal. A Douro River Cruise gives you an immersive experience in Portugal. During the course of your cruise along the Douro, you’ll come to appreciate the beauty of the country, the warmth of the people, the taste of Portuguese wines, the fresh seafood and Portuguese specialities (think Pastel de Nata, the rich Portuguese egg tart pastry), and the enduring charm of villages where time seems to have stood still. At least for the moment. See if before it changes. 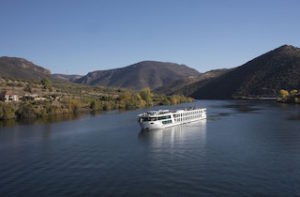 Emerald Radiance all alone on the Douro. © 2017 Lynne Harty