What Does “Torres del Paine” Mean?

Posted on January 17th, 2018 by Jane Behrend in Point-to-Point

Travel Research Online
Given the extreme geology — and how difficult it is for even the most experienced climbers to summit the peaks — it’s tempting to think that Torres del Paine means “Towers of Pain” in English.
But that interpretation is only half right.
Indeed, the Spanish word torres does mean “towers.” But paine is the Teheulche Indian word for “blue.” In other words — Towers of Blue.
While the name likely refers to the gray-blue hue of the granite in certain light, it could just as easily describe the entire landscape when viewed from afar — the bands of blue sky, water and rock that make Torres del Paine one of the world’s most distinctive landmarks. 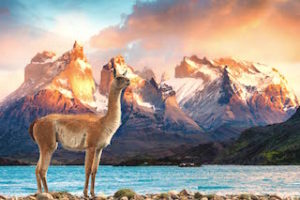 As for how (and when) the Spanish and Amerindian words got mashed together, that remains a mystery. The exact origin of the name is lost in history.

In 1879, intrepid Scottish traveler Lady Florence Dixie became the first European “tourist” to visit the mountains. Not knowing what else to call the peaks, she dubbed them Cleopatra’s Needles after the granite obelisks of ancient Egypt.
But Spanish baqueanos had been exploring the area for at least a decade prior to Lady Florence’s arrival. And it was probably those cowboys, mingling with the few Teheulche who remained in the region, who coined the term Torres del Paine. Teheulche is considered an extinct language. The last native speaker is thought to have died in the 1960s or 70s. But their legacy lives on in the name of the an incredible mountain range and national park.

Share your thoughts on “What Does “Torres del Paine” Mean?”