Posted on February 20th, 2018 by Simone Hasskew in Outposts

Oberammergau may be a foreign destination to you, but this sleepy town is known around the world for its tradition of passion plays and woodworking. Thanks to Collette, the supplier sponsor of this article, you will no longer be in the dark about the many history of the arts in Oberammergau. 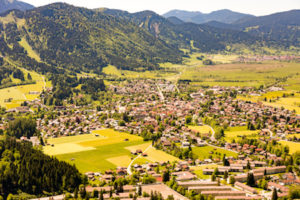 Oberammergau, also known by the name Upper Ammer Vale, is a small down in the district of Garmisch-Partenkirchen of Bavaria, Germany. The village is known most commonly for its long running tradition of woodcarving and its 380 year tradition of Passion Plays, but it does have much more than just those activities to entice travelers and visitors alike. There is much to see in and around the town of Oberammergau. Ettal Abbey is one of these sites, located in Ettal village close to Oberammergau. This Benedictine Monastery has a community of more than 50 monks, and is one of the largest benedictine houses.

Ettal Abbey was founded in April of 1330 on what was previously a site of importance along the primary trade route between Italy and Augsburg. Over the years Ettal Abbey suffered much damage, including a fire in 1744 that largely destroyed much of the buildings,. The building was rebuilt in the baroque style after the fire, and subsequently Ettal Abbey’m significance and important grew with the construction of the new buildings. It has become one of the most important monasteries in the Alpine region. There’s more to Ettal Abbey than just the school though. You can explore a bookstore and a distillery run by Ettal. Make sure to sample some of the Ettaler Kloster Liqueur the monastery produces after touring the grounds. 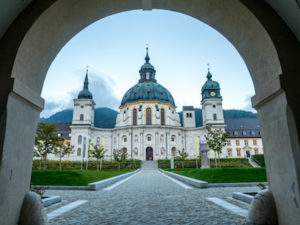 For some outdoor exploring and adventure, traipse through Murnauer Moos. It is the largest naturally preserved moor area in Central Europe, and covers quite a diverse landscape. This landscape includes litter meadows, low moors, spring funnels, and even bogs. Walk along one of the numerous streams or even spend some time birdwatching. Murnauer Moos is home to many different species of birds, including the Tree Pipit, Field Swirl, Puffin, and Reed Warbler. The paths through the moors are well indicated, allowing you and the family to spend hours exploring the moor.

The Pilatushaus is an art museum definitely worth exploring when visiting Oberammergau, as it pays homage to the arts and culture of the village. The building housing an array of works of art is a work of art in itself! The exterior is covered in frescoes installed in 1784 by Franz Seraph Zwink. The Pilatushaus actually got its name from these frescoes found along the exterior of the building. Inside the Pilatushaus you will see its beautiful glass picture collection. One thing that makes Pilatushaus so unique, and different from your average art museum is the first floor “living workshop.” 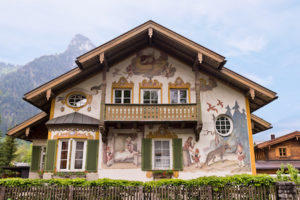 It is here that visitors can watch resident artists work in different mediums, from metalworking to fabric works. You can even purchase some of these local-made pieces, and if you’re lucky maybe even chat with the artist about what inspired them! The Oberammergau Museum is another way to spend an afternoon. Erected in 1910 the building is over 100 years old, making it a work of art all in its own. The arched, chapel-like room blends old constructions with new, modern touches as if the two were old friends. The exhibitions within the building have presented different concepts since 2004, keeping the exhibit fresh and exciting.

Visiting Oberammergau would not be complete without seeing Kofel Mountain. Kofel Mountain stands at over 4,000 feet, and is the signature mountain of Oberammergau. The mountain’s summit is only about a half mile away from the village, and Kofel is known for its distinct white head. There are a few routes that lead to the top of the mountain and as long as you are sure footed, and have a head for heights, they are even safe for families with children. Being able to take in Oberammergau from a distance, as well as the skyline, is an experience in itself that will make your Bavarian vacation exceptionally memorable.

Oberammergau is a unique village that, after visiting, you’ll want to see time and time again. Thanks to Collette, you’ll be able to see all that this Bavarian town has to offer!

Share your thoughts on “Oberammergau: Explore Germany’s Gem with Collette”