Your Next Safari? Indian Wildlife Diversity is Off the Charts | Travel Research Online

Your Next Safari? Indian Wildlife Diversity is Off the Charts

Posted on May 9th, 2018 by Jane Behrend in Point-to-Point

Africa may be the spot on the planet most famous for safaris (a Swahili word that literally means “journey”) but it’s far from being the only place where travelers can experience close encounters of the critter kind.

Another incredible place for wildlife watching is South Asia, in particular the India, Nepal and Sri Lanka which between them boast scores of national parks and nature reserves that revolve around animals. 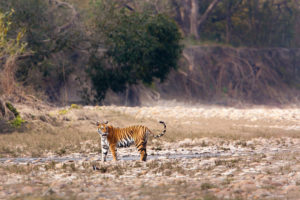 India alone boasts some of the world’s best wildlife-oriented national parks including legendary places like Kaziranga,Ranthambore, Bandhavgarh, Corbett and the Sundarbans. Places that this easily rank with the Serengeti or Masai Mara in biodiversity and variety of large animal.

Wildlife has long fascinated visitors to the subcontinent. British author Rudyard Kipling was entranced enough to write a little ditty called The Jungle Book, later made into a series of animated and live action movies.

Baloo (the bear), Bagheera (the black panther) and Shere Khan (the tiger) might be fictional characters in the book and movies. But those are also real-life species visitors can observe and photograph in the South Asia wilderness today.

India’s wildlife diversity is off the charts. Consider the fact that a full 10 percent of the world’s wildlife species are found In India, including 870 endemic species. Among these are:

How does one go about arranging an Indian wildlife safari?

A number of outfitters can do it for you, including Jungle Sutra, a veteran of India’s national parks and other wildlife areas.

Jungle Sutra arranges wildlife experiences that showcase the identity, character and uniqueness of each area. And they do it in luxury and style. Each itinerary is customized to the preferences and budget of the traveler. Jungle Sutra also has a strong social initiative, engaging with local communities and officials, giving back to the areas where their trips take place.

Share your thoughts on “Your Next Safari? Indian Wildlife Diversity is Off the Charts”