Posted on June 5th, 2018 by Joseph DeLoach in Outposts

In the early 1800’s, Louis and Clark explored and mapped many areas of the northwestern United States. Among these were the Snake River and the Columbia River. The beauty of these routes has been admired since it was settled by prehistoric Native Americans 11,000 years ago. All around the region these rivers flow is a picture of nature at its finest, rich and mostly unchanged. Thanks to American Cruise Lines, you’ll learn all about how the traveler will enjoy what the Native Americans and early Americans saw as a magic land. 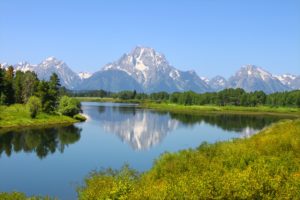 The Snake River is one of the major rivers in the Northwest region of the United States. It runs from east to west and is 1,078 miles long. Staring in western Wyoming, the river winds north to south – and then north again – as it makes its way across southern Idaho. This stretch of the river is 400 miles long, mostly flat, and is called the Snake River Plain. The eastern part flows through the center of Yellowstone National Park. Going west along the Snake River the traveler will find that most of Idaho’s major cities are in the Snake River Plain as well, as is much of the agricultural land. Also along this area there are many areas of falls: Lady Face Falls, Elk Creek Falls, Mesa Falls, and more. The most well-known falls are the Shoshone Falls near Boise, also called the ÒNiagara of the WestÓ. At 900 feet wide, the Snake River dumps water from 212 feet into the river below. Further west, the river follows the Idaho-Oregon border north. Here, the river cuts through a steep canyon called Hells Canyon. This canyon is 10 miles wide, and is America’s deepest river gorge. After Hells Canyon, the traveler will find themselves near Palouse hills in Washington state. This area of rolling hills marks the end of the Snake River. 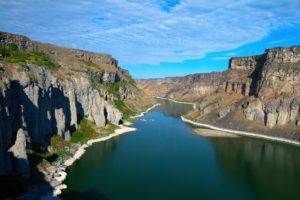 Once past the Palouse hills, Snake River adds its flow to the Colombia River at Tri-Cities, WA. The Colombia River is the largest river in the Pacific Northwest region of America, and the largest to empty into the Pacific Ocean at 1,243 miles long. Starting in the Alberta Region of Canada, it flows north then turns drastically south in a 180-degree turn. That is until the Snake River joins, where it turns directly west. This westward turn defines most of the border between Washington and Oregon, for 309 miles. Over 80 miles of the border is made up of the Colombia River Gorge, which is up to 4,000 feet deep. This gorge is a wonderful area full of waterfalls, streams, trails, and great lookout points. Traveling near Portland and Vancouver, the Colombia River empties into the Pacific Ocean just west of Astoria, Oregon. 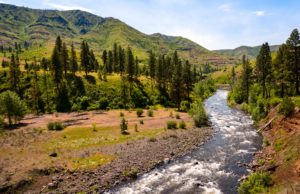 The journey these rivers take is a majestic run through the wildest parts of America. With untouched forests, vast plains, jutting mountains, rolling hills, and glorious falls; it is a relaxed river ride full of the beauty that only the pristine wilds can provide. That’s why American Cruise Lines offers a cruise from the Snake River to Colombia river – an experience that the traveler will not soon forget.