Posted on June 7th, 2018 by Joseph DeLoach in Spotlight

Tunisia is the northernmost point of Africa. Steeped in ancient culture and architecture, Tunisia is vastly different from Western countries. With a Mediterranean climate in the north, and semi-arid and desert climates to the south, Tunisia has a varied amount of ancient richness to please the traveler. 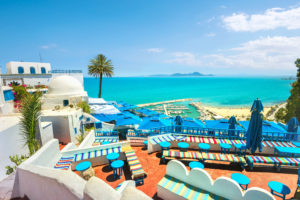 Northern Tunisia includes the major cities and sites the traveler will want to visit. Tunis, the capital and largest city of Tunisia, is a laid-back city. The center of the city is the Medina quarter, a UNESCO World Heritage Site. This area contains about 700 monuments including, mosques, palaces, mausoleums, and ancient fountains. It has been a major center for activity since the year 698. Here, you’ll also find the city gates of Tunis, large archways named Bab el Bhar (Sea Gate) and Bab Sidi Kacem.

Outside of the Medina, the traveler can find many more sites to experience Tunis: the Al-Zaytuna Mosque, which cover 1.2 acres and is a major sight to see; and the Bardo Museum, the second largest museum in Africa that houses many important archaeological discoveries from the area. All around the Medina of Tunis, the traveler can feel history in the ancient ways of construction that make up this area. 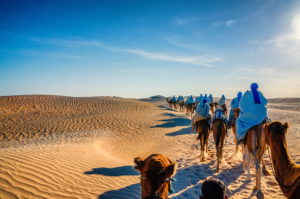 Just outside of Tunis is the former capital of the Carthaginian civilization, the ruins of Carthage. Once a mighty walled city, it is now a large collection of ancient buildings standing the test of time. The Carthage Museum, located on Byrsa Hill, overlooks the archeological site, the city, and the coast. This museum features an array of mosaics, sculptures, and coffins from ancient Carthage. Attached to the museum is the St. Louis Cathedral, which was completed in 1890. In the ruins themselves, the traveler can venture out for a choice many different sites. The Amphitheater, which as constructed by the Romans after the fall of the Carthaginian Empire, is surrounded by forests and rolling hills around the ancient staging area. Basilica of Saint-Cyprien is a historic Christian temple with a panoramic view of the sea, and is surround by a large cemetery. The ruins of the largest Roman baths outside of Rome can be found as well. These baths are surrounded by mosaics and an ancient cemetery. Near the ruins, and along the coast, is the Presidential Palace. The traveler can choose to walk by this extravagant home of the leader of Tunisia. 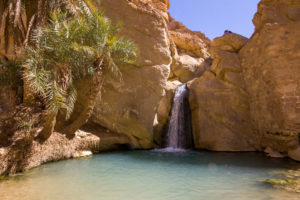 For the beach lover, Tunisia offers many slices of paradise along its coast. Of the coast of Tunisia is the island of Djerba, which has the best beaches in Tunisia. The turquoise waters surround this island, which some call the ‘island of the thousand palm trees’. This picturesque beach has the white powdery beaches of postcards. El Haouaria is off the beaten path, which means that the traveler won’t have to deal with too many tourists. Near a mountain range, the El Haouaria mountains, this area is a relaxing beach with bird-watching in the springtime. Only an hour drive from Tunis, Hammamet is perfect for scuba diving and snorkeling with its underwater marine life. It also has the clear, blue water and white sands of paradise.

Tunisia has much to offer the traveler: pristine beaches, a rich history, and a relaxing atmosphere to get rid of the workweek blues. Tunisair, the flag carrier of Tunisia, wants to fly the traveler to this majestic land. With a new non-stop flight from Montreal, Canada to the capital of Tunis, traveling to Tunisia has never been easier.