Quebec City with Vacations By Rail

Posted on June 14th, 2018 by Joseph DeLoach in Spotlight

Most people traveling to Canada think of Vancouver or Montreal when choosing a destination, but there is a gem that is often overlooked. This is Quebec City, one of the oldest settlements in North America. Thanks to Vacations By Rail, you’ll learn all about what the traveler will find in this traditional city on the east coast of Canada. 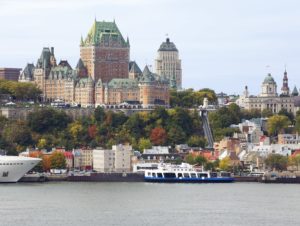 Modern day Quebec City is the capital of the Canadian province of Quebec. Though, when in was founded in the 17th century, it was the capital of New France. First settled in 1608, it was named after an aboriginal word that meant “where the river narrows”. The official language is French, but other languages including English are heard spoken throughout the city. 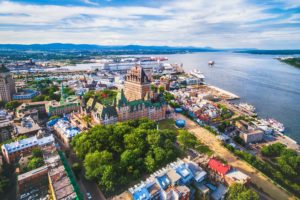 The central part of Quebec City sits atop a 200 ft. cliff that overlooks the St. Lawrence River. This area is known as Old City and is a UNESCO World Heritage site. Old City was built with defense in mind, as it was built as a walled city. In fact, it is one of two cities in North America that has preserved their walls. The streets are cobbled, narrow transports moving past spired churches and houses built in the 17th century. One of the more obvious sites in Old City is the Le Chateau Frontenac. Built in 1893, it is a luxury hotel that is castle-like with turrets jutting into the sky. Its prominence in the skyline of Quebec City cannot be overstated. Wrapping around the ground level of the Le Chateau Frontenac is the Terrasse Dufferin. This is a walkway with scenic views of the St. Lawrence River, where the traveler can stop at gazebos and benches to rest while casually strolling along the 425-meter-long boardwalk. 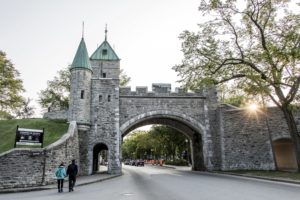 After a leisurely stroll along the boardwalk above the St. Lawrence, La Citadelle awaits the traveler. La Citadelle is North America’s largest fort and was completed in the year 1850. Originally a project between the French and British to fortify against an American invasion, the fort still stands as an active military installation. Tours of the citadel, and the museum within, run daily. Another notable attraction for the traveler is the Musée de l’Amérique francophone. This is a museum on the grounds the Quebec Seminary. Known as possibly the oldest Canadian museum, it was started in 1663 by traveling priests who brought scientific objects back from Europe.

In Quebec City, the traveler will find a relaxed atmosphere for walking through well-preserved history. That’s why Vacations By Rail wants to give the traveler a chance to see the area by rail and tours.

Share your thoughts on “Quebec City with Vacations By Rail”