Adventuring the Atacama With Marnella

Posted on October 2nd, 2018 by Joseph DeLoach in Outposts

Atacama desert is the driest desert on Earth. But, don’t let this turn you away from its stunning beauty and stillness. It is a place for adventurers, with many activities and sites: trekking, climbing, archaeological sightings, amateur astronomy, to even sand boarding down magnificent dunes—Marnella wants to show you the majesty of the Atacama Desert.

The Atacama desert, Desierto de Atacama in Spanish, is a plateau in South America, along the Pacific coast of Chile. It is the driest desert in the world with 1 mm of rain per year, and occupies 41,000 sq mi (105,000 km2). Within this area, a plateau covers 600 sq. mi (1,000 km). The terrain varies, and includes stony grounds, salt lakes, sand, and felsic lava from ancient volcanoes. 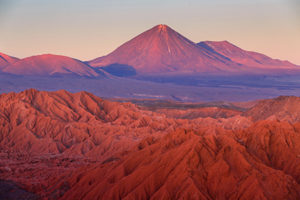 San Pedro de Atacama lies at the edge of the Salar de Atacama area of the Atacama. Originally a quartz and copper mining town, it is now a base for tourist to explore the vastness of Desierto de Atacama. The town grew around an oasis, and was first inhabited by the Atacamenos. The Atacamenos were known for their ceramic pottery and basketwork, which you can see on display in the R.P. Gustavo Le Paige Archaeological Museum. Another highlight of San Pedro is the Church of the San Pedro de Atacama, a historical monument. Constructed in the Spanish colonial period (17th century), it is reported to be the second oldest church in Chile. Lodging in modern San Pedro is diverse, as you can stay in a five-star hotel with a spa or a hostel—and everything in between. 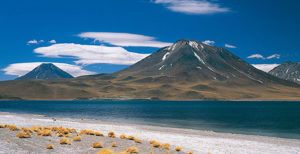 The sights to see in the Atacama are almost endless. The El Tatio Geysers, which are 14,000 ft. above sea level and number around 80 in total, are something to behold at dawn. This area also has a hot spring when you need a break from exploring such an inspiring sight. The Licancabur volcano juts along the edge of the desert at 19,409 ft. (5,916 m), capped with the contrasting white of snow. You take in more of the desert at Cejer Lagoon, 20 km from San Pedro de Atacama, which features a lagoon with high salt count. Like the Dead Sea, one can float without swimming while they bask in the alien world of the Atacama. Catch flocks of flamingos in the wild at the Flamencos National Reserve, a 286 sq. mi (740 km2) are separated into seven sections. You can also catch roaming herds of vicunas, a smaller cousin  to the llama. Also in the reserve, in the Cordillera de la Sal area, is the Valley of the Moon (Valle de la Luna). With various stone and sand formations carved out by nature, its range of colors and textures resemble the moon. Only 10 miles from San Pedro de Atacama, it is a popular spot for tourists to observe the desert turn from pink to red at sunset—as the moon rises over a still land.

Unlike other attractions and places, the sparse and exotic beauty of the Atacama Desert will spur the imagination. This landscape should not be missed, that’s why Marnella wants to get you there.

Share your thoughts on “Adventuring the Atacama With Marnella”