Posted on October 9th, 2018 by Joseph DeLoach in Outposts

Brussels in not only the capital of Belgium, but also part of the de facto capital of the European Union. It has been a major player in international politics since World War II. The city sits at the crossroads of many European cultures and maintains a healthy mix of Romance and Germanic parts of Europe, which makes it a fantastic melting pot. Thanks to TUI Fly, today’s Outpost will be all about the beauty of Brussels and its many sites. 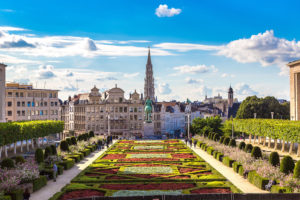 The most famous of areas within Brussels is the Central District. Starting with simple buildings, the origins of Brussels were started in 979 AD. It is strategically located on the Senne River, and was the first port. While not much from that meager beginning still stands, some marks of the 13th century can be seen in this district. Parts of a fortification wall built in the 13th century show how the central district was enclosed for protection. The Cathedral of St. Michael and St. Gudula is Romanesque church was built in the 11th century, replacing a previous church built in the 9th century in that very spot. Built in mostly Gothic style, this cathedral’s sharp angles point to the sky and will awe the traveler with its historical look. The Manneken Pis, meaning “Lil’ Piddler”, is a famous fountain depicting a naked, little boy urinating into a basin. Considered a display of Brussels’ sense of humor, the small child is often dressed in costumes to celebrate occasions or for absurdity. Some these costumes include Dracula, a Judo uniform, the boy with a sax celebrating Adolphe Sax’s 200th birthday, and a mayor member of the Seven Noble Houses of Brussels. The Lil’ Piddler is a must-see for anyone interested in the culture of Brussels. 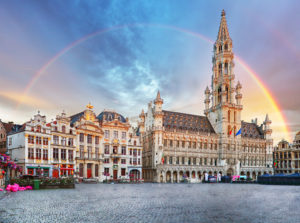 Also in the Central District is the Grand Place-Grote Markt. This grand building is in the central square of the City of Brussels. Surrounding the Grand-Place are guild houses, the City Hall, and the Maison du Roi. This is a hotspot for travelers to meander as they take in center of culture and aesthetic that only Brussels can offer. Some nights, the traveler will also find happenings such as music and light show along with the usual illuminated beauty of this square.

Though these are some of the major sites to see in Brussels, the traveler will enjoy many more. From the Jeanneke Pis, the female counterpoint to the Lil’ Piddler, to the museums such as Musees Royaux d’Art et d’Histoire which feature collections of art objects from different civilizations from all over the world. All of these can be seen by the traveler after flying to Brussels with TUI Fly, one of the cheapest ways to make it to Brussels and many more destinations around Greece, Spain, Tunisia, France, Morocco, Italy, Egypt, and more!