Posted on October 16th, 2018 by Joseph DeLoach in Outposts

Once considered to be the cultural center and capital of Islamic Spain, Córdoba lies between the southern tip of Spain and Madrid in an autonomous area known as Andalusia. The city has well-preserved landmarks that have lasted throughout history and time, showcasing the many roles Córdoba has served. Thanks to Back-Roads Touring, today’s Outpost will dive into this diverse city and the features that make it a wonder for the traveler to visit.

Throughout history, Córdoba has been settled by Muslims, Romans, and Spanish cultures. Its close proximity to northern Africa makes for a cultural blend that lasts to this day. This is not only evident in historical texts and timelines, but in the architecture as well—particularly the Old City. The Old City, in the center of the city, is a maze of narrow medieval streets lined with the arched entrances of stone buildings. 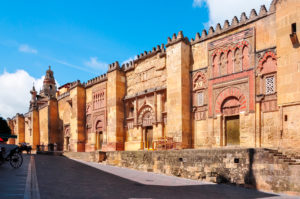 One such entrance leads into the Mezquita, which is undoubtedly the main attraction in Córdoba. The Mezquita was built in 786 as a mosque, added to many times throughout the Muslim rule, and is a UNESCO World Heritage Site. With its grand courts and rooms full of columns and arches galore, the traveler will be in awe of this historic site. The site began to be converted to a church in 1236 when the Christians reclaimed the area—which adds to the multicultural feel of the city. In the center of the building is now a cathedral, standing in stark difference to the rest of the aesthetic. Though, the cathedral has a beauty of its own as it is ornately decorated and a perfect chance to see the differences and commonalities between the two religions. 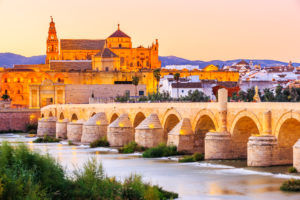 Also in the Old City is the Roman Bridge. This stone bridge, built in the early 1st century BC, is a testament to the engineering feats of the Romans. The 820-foot-long bridge was once the only way to get over the Guadalquivir River and led to a fortified gate, which is now a museum. The Museum of Al-Andalus Life not only offers up a fantastic view of the city, but also provides a recreation of Córdoba of the period between the 9th-13th centuries. With headphones that give the traveler information about artifacts and scenes from that period, walking over a Roman bridge to experience the life of those that have come before is a gem found in a magnificent city.

Córdoba steeps the traveler in the rich history of the Andalusian lands. From Moorish to Roman aesthetics, to the culinary and musical delights of Spanish culture—Back-Roads Touring lets the traveler in on the different places and bits of a culture that makes up a unique location along the many paths they offer. And, as always, Back-Roads Touring will give the traveler a true glimpse into the lesser known parts of those cities and towns.