Posted on November 16th, 2018 by Britton Frost in Deck Plans

With only two weeks left until I sail Celebrity Edge, my excitement is beginning to overcome me. My two day trip aboard this beautiful new ship will start on the 25th of November, and wrap up on the 27th. There are so many new features aboard this ship, and with it being my first time on Celebrity, I’m fairly certain I will be in for a treat.

I can already tell that the trip is going to be entirely too short, because there is so much that I am looking forward to seeing. I know that I may not have time to get to everything on the three day cruise, so I figured I should highlight the top five spaces that I am looking most forward to exploring aboard Celebrity Edge.

Celebrity Edge during her January float-out at the STX France shipyards in Saint-Nazaire. Photo courtesy of Celebrity Cruises.

I can already tell that the trip is going to be entirely too short, because there is so much that I am looking forward to seeing. I know that I may not have time to get to everything on the three day cruise, so I figured I should highlight the top five spaces that I am looking most forward to exploring aboard Celebrity Edge. 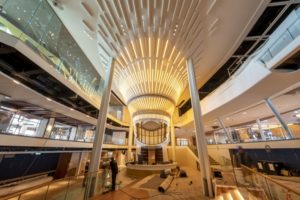 The Plaza, while still under counstruction. Courtesy of Celebrity Cruises

1. The Plaza – Celebrity sent out an entire press release detailing the design of The Plaza. The design feels very modern but is also fairly rustic at the same time. There is a hallway that showcases all the steel work of the ship when walking one way, but walking the other way the “guts” are hidden and there is a more modern feel.

Ad on most ships, the lobby is striking. It has to be, because it is where you spend a lot of time gathering and where you get your first impressions. However, this lobby seems to be a bit different than others I’ve seen. There was focus into creating multiple art pieces for guests to admire, whether they are passing through or sitting at the Martini Bar. There is also a modern chandelier with color changing LED-strips. Whether or not the modern style resonates with you, it would be impossible to say that this space was not unique. 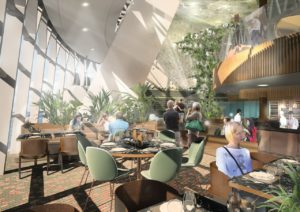 2. Eden – Again super modern in design, Eden is one of 29 dining venues on Celebrity Edge. The space is very fresh looking. It features a lot of greenery, not only with plants but also the colors within the furniture and accents of the space. There is a glass wall, allowing not only views but also the sunlight that is often missed during certain venues on big ships. It feels very hip and fresh, having only seen renderings I’m hoping that the space gives me the atmosphere I am anticipating. 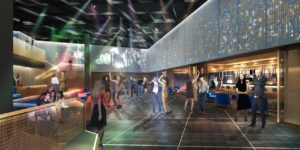 3. The Club –  The description of The Club given by Celebrity is, in one word, extravagant. Features of the club include a body scanner, a camera that is passed around throughout the night, 20’s inspired cocktails, and even an aerial saxophonist. Although none of these things are even close to my bare necessities while vacationing, they are certainly intriguing. For young adult travelers, it definitely makes a good Snapchat story, or Instagram moment. 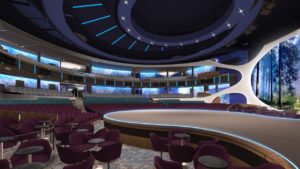 4. The Theatre – As quoted from Celebrity’s website, “One of the most expected entertainment venues you’ll find on Celebrity Edge is also the most unexpected.” If there is a certain venue that I have been to on every single cruise ship that I have ever taken, it is the theatre. As someone who loves stage performances, the theatre might be somewhere that I venture nightly aboard a weeklong cruise. That being said, it is hard to put much variety to a stage and seats. While certain performances can be standouts, and give venues their own style, the format of theatre venues is often the same. On Celebrity Edge the stage at The Theatre extends into the audience. The concept seems to be a more immersive experience for the audience, as they are taken into more of the show than just watching it straight on; however, I am curious to see how this works. I worry that if you are sitting on the side of the stage, you are going to be seeing a lot of backs instead of faces. 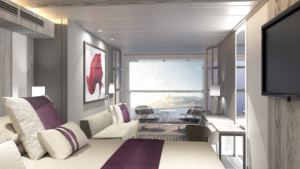 Infinite Verandas provide the feeling of having a veranda without having to sacrifice the space that a separate balcony usually requires. Photo courtesy of Celebrity Cruises

5. Staterooms – Last but not least, I am excited for the staterooms on the ship. Although there are many apparent draws to the ship, it is always important to have a nice stateroom on your vacation. While I am the type who likes to go out and have a few drinks and watch shows or dance, I also enjoy spending time alone reading and listening to music. Most of that I prefer to do in my stateroom, or on my balcony.

There are beautiful suites and villas on the ships, but perhaps the most unique feature of the staterooms is found in one of the mid-tier options – the Edge Stateroom with Infinite Verandas. A concept that we often see on the river, these Infinite Verandas are essentially floor to ceiling windows that allow views of the ocean. The windows open to provide the feeling of having a veranda without having to sacrifice the space that a separate balcony usually requires.

There is so much more to see on the ship, such as the Rooftop Garden, Magic Carpet, Solarium, and all the other public spaces. Make sure to come back in two weeks and read my Live Voyage Reports from the trip.

Want to know more of my thoughts on Celebrity Edge? Check out my podcast below.

Share your thoughts on “Countdown To Celebrity Edge: My Top Five Anticipated Venues”