Posted on November 2nd, 2018 by Ralph Grizzle in Deck Plans

Next week, I’ll embark on my third visit to the White Continent. My upcoming voyage, however, is quite different from the others.

For starters, the weather forecast for the Antarctica Peninsula looks to be bone-chilling. The Norwegian Meteorological Institute, which arguably gives the most accurate forecasts for Antarctica, is showing -24°C for Thursday, November 8. That’s -11.2°F. We won’t be in Antarctica until the following week, so hopefully it will warm a bit.

On previous visits to Antarctica, temperatures have ranged from the mid-20s°F to close to 40°F. If there is sun, we’ll get lots of it. Sunrise, as of October 29, was at 7:05 a.m. and sunset was at 1:05 a.m. With the seasons being opposite of those in the Northern Hemisphere, the days will continue to lengthen as the Southern Hemisphere marches toward summer solstice on December 21. 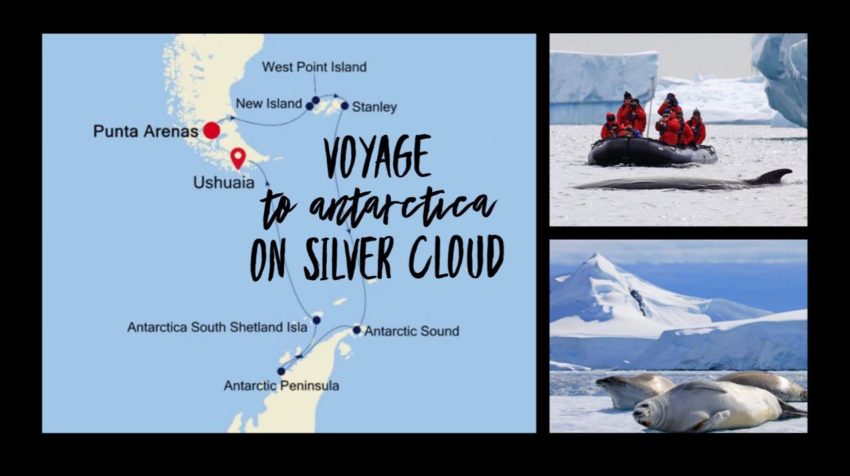 The extent of sea ice is also impressive, as you can see in the graphic below. In that image, the Antarctica Peninsula is the little finger sticking out toward 11 p.m. and thankfully for our sailing, at least a small part appears to be free of significant ice. I’ve no idea how the extent of sea ice compares historically, but what is apparent is that we won’t get deep into the Antarctica Peninsula. Nonetheless, the ice and cold can make for some beautiful seascapes and landscapes. 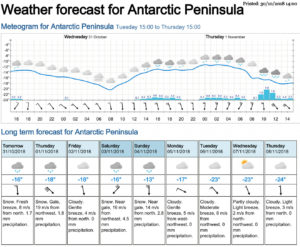 We’ll arrive at the Antarctic Sound on the afternoon of Friday, November 16, and we may be able to visit Hope Bay and/or Paulet Island, where Adelie and Gentoo Penguins breed, as well as Kelp Gulls and Cape Petrels, Snow Petrels and Skuas. We’ll spend the next two days, Saturday and Sunday, in the Antarctic Peninsula, where, if all goes as planned, we will do landings via Zodiacs. Without these inflatable flat-bottom vessels, expedition cruises would be little more than drive-by’s. Zodiacs allow adventurers to step ashore and explore.

We’ll spend all day Monday in the South Shetland Islands, which is 478 miles south of Cape Horn. Separated from the Antarctic Peninsula by the Bransfield Strait, nine major islands make up the group. The region was the first to used by sealers in the early 19th century, and because of the Shetland’s proximity to South America, they still are the most visited by scientists and tourists. Chinstrap, Adelie, Gentoo and Macaroni Penguins all breed here. We’ll depart the Shetland Islands at 11 p.m. and make our way across the Drake Passage, arriving in Ushuaia by 6 a.m. on Thursday morning.

Check out the video about our upcoming voyage …

I’ve had some great experiences with Silversea. In 2015, I went to Greenland with my son where we spent the final night of the voyage marveling at the Northern Lights. That was on Silver Explorer, a smaller ship than Silver Cloud. See my report Video: A Father & Son In Greenland On Silver Explorer

One of my favorite voyages, though, was on Silver Discoverer, and that was to Russia’s Far East. It was an incredible trip. We saw a lot of wildlife, explored tiny outposts and met native people. On one day, from the comfort of our Zodiac, we saw what appeared to be thousands of walruses. On another, from the ship, we counted 21 brown bear along the shorelines, and on another day, we anchored to observe a pod of more than a hundred killer whales.

We also discovered on a lonely shore a pair of nomadic reindeer herders, who were part of a larger group that herd their reindeer from 1,000 kilometers inland to the shore so that the reindeer can drink salt water. The nomads think it’s good for their reindeer’s bones. We brought our pair of reindeer herders on board Silver Discoverer, where they dined on beer and steak at The Grill. It was a fabulous trip. See my report Silver Discoverer, Russia’s Far East: Day 15 – Heading Home To Nome & Our Voyage Recap Of Russia’s Far East

We leave home for our 11-day voyage on Silver Cloud on November 9. I hope you’ll follow along. The plan is to produce video and post stories and photos as often as possible. If you have comments or questions about our voyage, please use the comments section below.

Silversea’s expedition cruises are really wonderful. And even though the “weather outside looks frightful,” I can’t wait for our adventure to begin.

Share your thoughts on “Voyage Preview: Antarctica On Silver Cloud”