Posted on March 15th, 2019 by Ralph Grizzle in Deck Plans

Founded more than 30 years ago in the UK as Riviera Travel, Riviera River Cruises recently started targeting English-speaking guests from the United States and Canada for its value-priced river cruise offerings in Europe.

The company has a fleet of 12 vessels on the rivers of Europe, with more on the way. Unlike other river cruise lines, Riviera offers a price-point that is substantially lower than most of its competitors. It does this by “unbundling” some features, like inclusive drinks. You’ll pay extra for things like bottled water, beer, wine, and spirits, but Riviera believes the overall cost savings justify the add-on charges by making river cruising accessible to a wider swath of people who might be put off by the multi-thousand-dollar-fares charged by other lines. 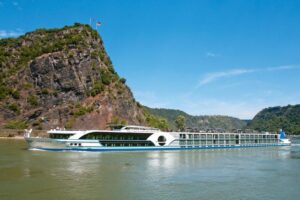 For those who want to add a touch of all-inclusivity to their Riviera experience, the company is offering drink packages for its 2019 river cruises that start at roughly $159 per person for an average weeklong voyage, and $299 for longer voyages. This adds draft and non-alcoholic beer, red and white house wine, bottled water, soft drinks, and juices on a complimentary basis to lunches and dinners served onboard. Spirits, or drinks purchased outside mealtime, come at an additional but reasonable cost.

For those who don’t imbibe – and who don’t wish to pay for an inclusion they won’t make use of – Riviera’s bare-bones pricing structure makes a lot of sense.

What Riviera has going for it is its three decades worth of experience as a tour operator, and the rave accolades its UK-based guests have given its river cruise product. Ships carry between 126 and 169 guests apiece, and are elegantly decorated with plenty of fine woodworking, brass fixtures, and modern décor.

Riviera also offers some unique extras aboard its ships, including two dining venues aboard most ships, luxury toiletries from Crabtree & Evelyn, L’Occitane, or Rituals (depending on the ship), onboard fitness centers, and even steam rooms and saunas aboard select vessels. Other niceties – like the tea and coffee making facilities included in every cabin – reveal the line’s British heritage.

Perhaps one of Riviera’s strongest features, however, is just how solo-traveler-friendly the line is. Every ship in the fleet offers cabins that can be booked, depending on availability, for little to no solo traveler supplement.

Riviera’s river cruises offer plenty of value, with luxurious accommodations and ships operating fascinating and engaging itineraries throughout Europe. With a new office in the United States and bookings available in U.S. dollars, getting onboard a Riviera ship has never been easier.

The Riviera River Cruises fleet is primarily made up of new river cruise vessels, with most of its ships launched in 2017 and 2018. All Riviera River Cruises vessels have a certain number of staterooms that are available to solo travelers with no single supplement, subject to availability. These are usually a lower-category stateroom, but the removal of the single supplement is a huge bonus to travelers wishing to take a solo river cruise journey.

Staterooms and Suites are stocked with luxury toiletries, and all rooms have beds that can be set up as either two twins or one queen.

While there are some differences between the ships of the Riviera fleet in terms of size and layout, all feature classic, elegant décor; 24-hour tea and coffee stations; spacious sun decks; and two dining venues: a traditional restaurant and a more casual, stern-facing bistro that serves up light fare throughout the day.