Cruising is often a great choice for family travel. There is no packing and unpacking, lugging bags and backpacks on trains and busses, or trying to figure out what to do each day. The ease of cruising is what makes it so appealing to so many people. However, a lot of times families forget to look at river cruising as an option for travel – and for good reason. Families could not easily be accommodated … until now. New cruise ships are being developed with connecting staterooms for families, as well as triples and quads that will accommodate a family of four. 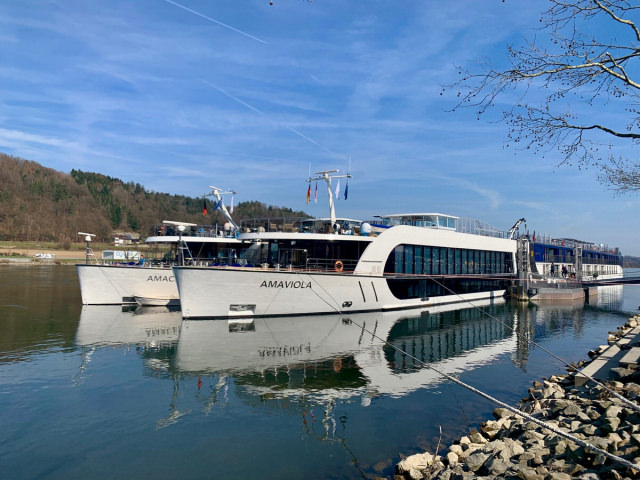 While the river cruise market has opened up to younger travelers, and even families, there is still hesitation when taking this mode of travel into consideration. Over the next couple of weeks, we will be looking at the most family-friendly river cruise operators. This will include river cruises with kids’ programs, (hint: there are only a few), staterooms with third and fourth berths, age restrictions, and more. 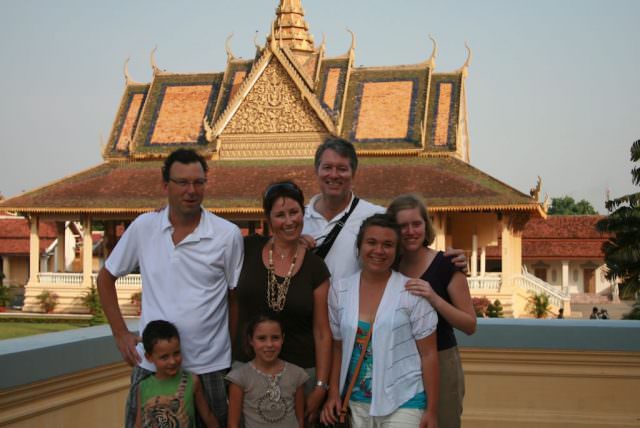 Me, far right, cruising the Mekong with my dad.

The first company that we will look at in this series is AmaWaterways. I wanted to start with AmaWaterways, because it is the only river cruise company that I actually had a chance to experience as a child.

My first sailing with AmaWaterways was on the Mekong at age 14. Surprisingly, I was not the youngest passenger on the ship. There were two other children, aged seven and nine, who sailed through Vietnam and Cambodia with us. While some may think that river cruising with children of that age is ridiculous, their parents shared what made the trip so special for the kids, what they learned along the way, and that this once-in-a-lifetime trip would provide the children with memories they would hold onto for the rest of their lives. I can’t speak for my younger travel companions but for me, it did just that.

Family-owned and operated AmaWaterways not only allows children onboard, but also encourages children to river cruise. Young travelers from the age of four and up are welcome aboard any AmaWaterways sailing in Europe, though it is important to note that there are no children’s programs, and there will be no child specific entertainment.

What does this mean? Last week I wrote about children’s programs on ocean cruise lines for our sister site, Avid Cruiser. My opinion on children’s programs is that it is okay if they are not offered; however, parents should be in tune with how their children behave and what kind of activity level their children need during the day. If your child is one who needs to be doing activities consistently, then I would not recommend taking your child on a cruise without a kid’s program. It is as simple as that. 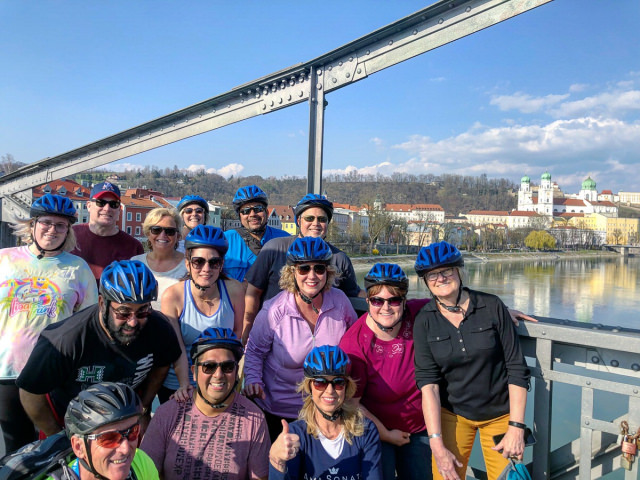 A few of my fellow passengers and I enjoyed a bike tour in Passau.

What AmaWaterways does, however, is make various activities and excursions appeal to a larger demographic than what a traditional river cruise may. Active excursions are provided in almost every port, and late night entertainment is always exciting and engaging. Active tours include bikes and hikes, and walking tours are offered in most ports as well. AmaWaterways also has a fleet of bicycles that are available for passengers to check out at any time, so a family bike ride is always an option.

Nighttime entertainment varies, but is often a musical performance. Whether the performance is comprised of dancers or singers, all the entertainment that I have seen aboard AmaWaterways’ ships is engaging and family friendly.

For cruisers looking for a child-specific sailing, AmaWaterways does partner with Adventures by Disney for select sailings throughout the year. On Adventures by Disney sailings, families can ride a toboggan during the winter Christmas Market cruises, hike along a waterfall or zip line through the Black Forest, visit Heidelberg Castle, and enjoy tubing, snow biking, curling and more. Whether exploring Alsace on horseback, partaking in a clog-painting demonstration in Holland or taking a macaroon-baking class in France, Adventures by Disney strives to make river cruises both educational and fun for everyone.

It is important to note, however, that this isn’t Disney Cruise Line that is partnering on these sailings. Adventures by Disney is a completely separate entity that was founded about a decade ago that is jointly managed by both Walt Disney Parks and Resorts and the Walt Disney Travel Company. So while the product will offer the same standards that Disney is known for, fans of the massive ships of Disney Cruise Line shouldn’t expect the same kind of product transferred over to river cruise ships. Nor will any of Disney’s characters be present onboard; instead, Disney-trained guides known as Adventure Guides will introduce families to the wonders of Europe. Approximately half of these guides will be American, while the other half will be locals from countries in and around Europe.

Apart from excursions and entertainment options, it is important to look at accommodations for family travel. On river ships, it is harder to come by third and fourth berths than on ocean ships because the size of the cabins on river cruise ships is much smaller. AmaWaterways not only has triple cabins on some of its ships, but also quad cabins and adjoining cabins. However, for children under the age of 11 any cabin can be a triple cabin. AmaWaterways will not provide an additional sleeping area, though. So you’ll be sleeping three to a bed.

Triple and quad cabins are available aboard AmaStella, AmaViola, AmaLea, AmaKristina, AmaMora, and AmaMagna. These are split into two categories: Category SS cabins include a sleeper chair and a sofa that converts into a bed. This category can sleep up to four passengers, and 3rd and 4th guests in the same cabin will pay 75 percent of the cabin fare. Category AB and AA cabins are triples and include a sleeper chair. Third guests will pay 75 percent of the cabin fare. Adjoining cabins are double cabins with a door that connects them.

In the video above, you can see cabin 211 on AmaViola. Though this is not a triple cabin, it adjoins to the triple cabin next to it, making the combination able to accommodate five people.

River cruising may not be for everyone, especially children – but if you are looking to take a cruise with your children, AmaWaterways is a great option. Not only does AmaWaterways allow many active options for young travelers, but its partnership with Adventures by Disney is a child specific program that will allow kids to have opportunities in Europe that they might not get elsewhere. I know from my own experience of being a young traveler with my dad that river cruising is a great way to see the world and create memories for a lifetime.

Share your thoughts on “Family River Cruises With AmaWaterways”